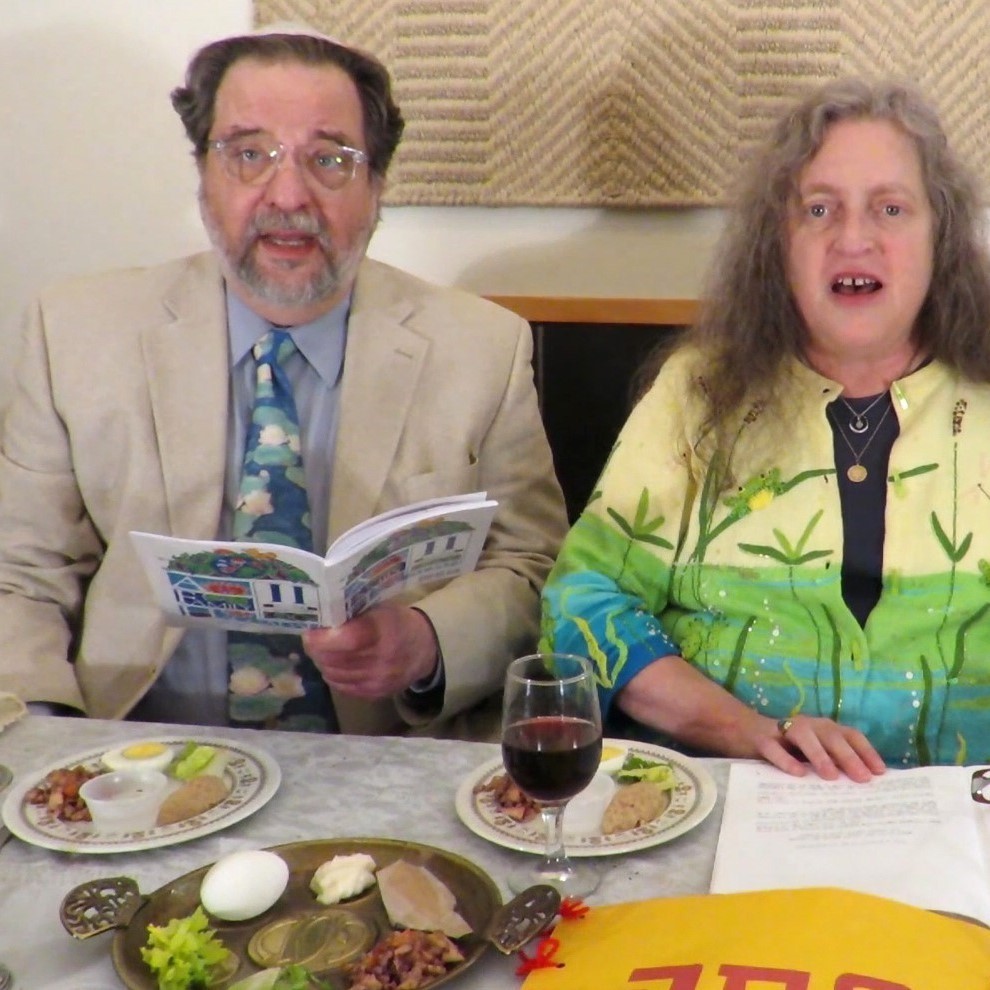 Cedar Sinai Park staff and volunteers have gone above and beyond to make Passover a joyful, communal experience even as the seniors remained in their rooms or apartments.
“We are able to create togetherness even though we are far apart,” says Kimberly Fuson, who became CSP CEO March 1 after seven months as interim CEO. “We are able to facilitate soul connections and heart connections even though we are physically apart.”
For the first seder this year, residents received room service with a small plate of ritual foods and a seder meal prepared by Chef Jon Wirtis, including gefilte fish he made using his Grandma Goldye’s recipe. At Rose Schnitzer Manor, residents were able to tune in to the in-house cable channel and enjoy a video seder led by Amy Shapiro and Jeff Olenick. Barbara Slader recorded a condensed seder, available on YouTube, for residents who wanted a shorter service. CSP staff helped residents at Robison Health Center and the Harold Schnitzer Center for Living, which do not have the in-house cable, use technology to stream one of the seders.
“Amy and Jeff and Barbara are part of the fabric of Cedar Sinai Park, and this is their latest act of loving kindness – chesed (in Hebrew),” says Fuson. “Because of the chesed of people like Amy and Jeff and Barbara and my staff, even in unprecedented times like these, we are able to celebrate.”
Amy and Jeff have been fixtures on the campus since the mid 1980s. Robison residents often asked her to sing for them since she sings Yiddish songs. The couple, often joined by their son, Louis, led Shabbat services at Robison for many years. In 1998, Louis became a bar mitzvah in the new sanctuary at Rose Schnitzer Manor, where the couple has led the seder for several years.
“It is our synagogue,” says Amy.
Barbara created and has led the RSM choir for the past 14½ years accompanied by Barry Lavine on the piano. She initially came to the campus to help her mother-in-law. But after her mother-in-law passed just before Passover in 2001, she began volunteering to lead RSM’s Friday night services. For several years, she has joined Jeff and Amy to lead the seder.
Fuson praised her staff for their tireless dedication during the crisis. Development and financial staff are working remotely. Staff from the adult day service program, which has been suspended under “Stay Home, Save Lives,” have joined the RSM enrichment staff to help engage residents through these unprecedented times.
“The team here is really rising to the occasion,” she says.
Fuson has had an up-close view of the staff and residents changed lives since she has been living in an RSM apartment while serving as interim CEO. Though she has an off-campus apartment lined up, she doesn’t know when she will be able to move under current restrictions.
“I’m grateful to be living on campus (now),” says Fuson. “It gives the staff and residents the knowledge there is always someone here.”
Fuson says she is also enjoying the Kosher for Pesach menu that offers residents an elaborate selection for each meal. Throughout Pesach, residents are being treated to room service with a varied menu for breakfast, lunch and dinner each day including such mouthwatering options as matzoh brie and various omelets for breakfast; ginger rockfish or kale, spinach and mushroom kugel;  Hawaiian seafood salad or braised BBQ short ribs for dinner; and fruit and salad options for side dishes. And that’s just a small sampling of the menu that looks like the holiday menu of a kosher restaurant in a big city.
After Passover, Fuson hopes to continue the in-room enrichment with exercise and music videos recorded by local volunteers and aired on the in-house cable channel.
Barbara is already working on the idea.
“We are inviting musicians who have performed here in the past to make video sing-alongs for the in-house cable channel,” says Barbara, adding she is really missing seeing everyone at RSM, especially her choir members. She says the videos will give residents a chance to sing along with people they know.