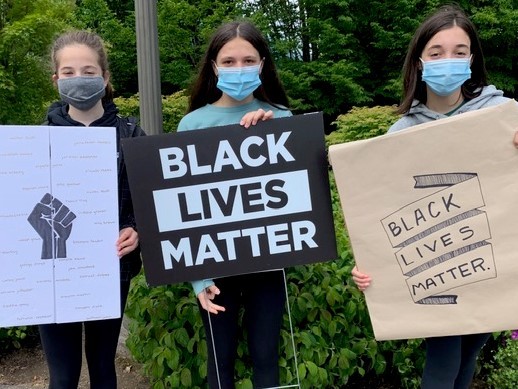 PHOTO: Last June, PJA held a community vigil to show support for racial justice. More than 130 students and families turned out to support the Black community and raise visibility of the violence and racism Black people experience. This March, some of those students participated in a virtual Student Diversity Leadership Retreat.

BY DEBORAH MOON
Social justice has long been a guiding principle for Portland Jewish Academy. The diversity, equity, inclusion lens the school has used in recent years reached a tipping point over the past year as protests swept the globe after the murder of George Floyd by police.
Now the school is taking action.
In March, 12 PJA middle school students participated in a virtual Student Diversity Leadership Retreat hosted by the Northwest Association of Independent Schools, PJA’s accrediting body. During the two-day event, students connected with student leaders from across the Northwest, explored the role of art in social movements, participated in affinity spaces and arts-based workshops, and generated plans for bringing their experiences and their learning back to PJA.
Next year, that core dozen plan to create a PJA student ally committee, similar to the staff diversity professional learning community that meets every other week to discuss issues of diversity, equity and inclusion.
PJA seventh and eighth grade humanities and drama teacher Marcie Brewer facilitates the staff diversity PLC and coordinated the students’ retreat participation. PJA was allotted 12 slots for the retreat and students had to apply.
“We actually had quite a bit of interest,” says Brewer. “Because we were hoping that this opportunity would be a launchpad for developing and starting up an ally group among our students, we decided to focus on sixth and seventh graders.”
In addition to developing a committee for students to talk about issues of diversity, equity and inclusion next year, she says the core group will likely give a presentation to the entire middle school before this school year ends June 11.
Brewer says the students were really invigorated by the idea of using art to fuel activism. “The work that they did with “raptivist” (rap activist) Aisha Fukushima was really inspiring for many of them,” says Brewer. “One of the things that we’re trying to do is make sure that we have that sort of activist art included in our curriculum.”
She says she and sixth-grade humanities teacher Harriet Wingard have worked closely over the past few years in evolving PJA’s humanities curriculum.
“PJA has a very strong tradition of activism and social justice, and that certainly predates the racial issues that have kind of come to the forefront in the last year,” says Brewer. “Harriet and I have taken an approach of looking at it through three different lenses: the COVID pandemic, the racial pandemic that our nation is facing and the climate crisis.”
In addition to the art activism workshops, the affinity groups at the retreat were also impactful.
“The affinity groups were awesome,” writes PJA 6th grader Liem. “The affinity groups were basically groups of people who could speak from the “I am” perspective. I decided to join the Black/African-American affinity group, and I wasn’t surprised, but there were a lot of people there. I could relate to them and talk to people who I haven’t even met! It was super fun, and I would do it again.”
Merrill Hendin, who has been PJA principal for 11 years, says the school has a relatively homogeneous population “just by virtue of being a Jewish day school in Portland, Oregon.”
At PJA’s latest reaccreditation process in 2018, NAIS recommended the school “really evaluate and assess our diversity equity inclusion practices in our school at every level – hiring, admission program, everything… and that’s where we’re at.”
“From every angle, we’re trying to be true to ourselves philosophically as a Jewish community day school and true the middot – identity and responsibility and respect – while also opening ourselves up and thinking about things in ways that we may not have been thinking about them in the past,” adds Hendin.
Last year, the school decided to explore neurodiversity. PJA brought in a number of experts in anxiety, executive functioning, attention deficits and certain learning disabilities to train teachers.
“We kind of got stopped in our tracks because of COVID,” Hendin says. “We probably will continue to take it further, really looking at how we can support students and their very diverse needs and be as inclusive as possible.”
Regarding the admission’s process, she says the school evaluates the subject needs of the child and the socioeconomic needs of the family: “As long as we can meet the needs of the child and the family, wouldn’t it help us to diversify and look at our population a little bit more broadly?”
PJA was recently included in an article about Jewish day schools and anti-racist education on the Jewish Telegraphic Agency (https://www.jta.org/2021/04/13/united-states/with-new-initiative-on-changing-school-culture-jewish-schools-focus-on-anti-racist-education). That article focuses on the deep work done by Prizmah on anti-racist education in Jewish day schools. While PJA did not participate in the training mentioned in the article, several staff members are enrolled in a small group forum called Prizmah Race and School Culture Collaboratives. Participants will participate in facilitated groups each month from May through January to work toward a common race and school culture goal.
Amanda Coven, director of education for the Oregon Jewish Museum and Center for Holocaust Education, says she experienced PJA middle schoolers’ enthusiasm for delving into racial equity issues when she led a workshop for students last month.
“The conversation revolved around Jewish people’s complicated relationship with race as it is understood and experienced in the United States,” says Cohen, adding they discussed the concept of “whiteness,” the diversity within the Jewish community and “how white Jews need to listen to, learn from and support Jews of Color when engaging in anti-racism work. The students had so many wonderful and insightful thoughts that it was clear this was a topic they had been thinking about and wanted to discuss.”