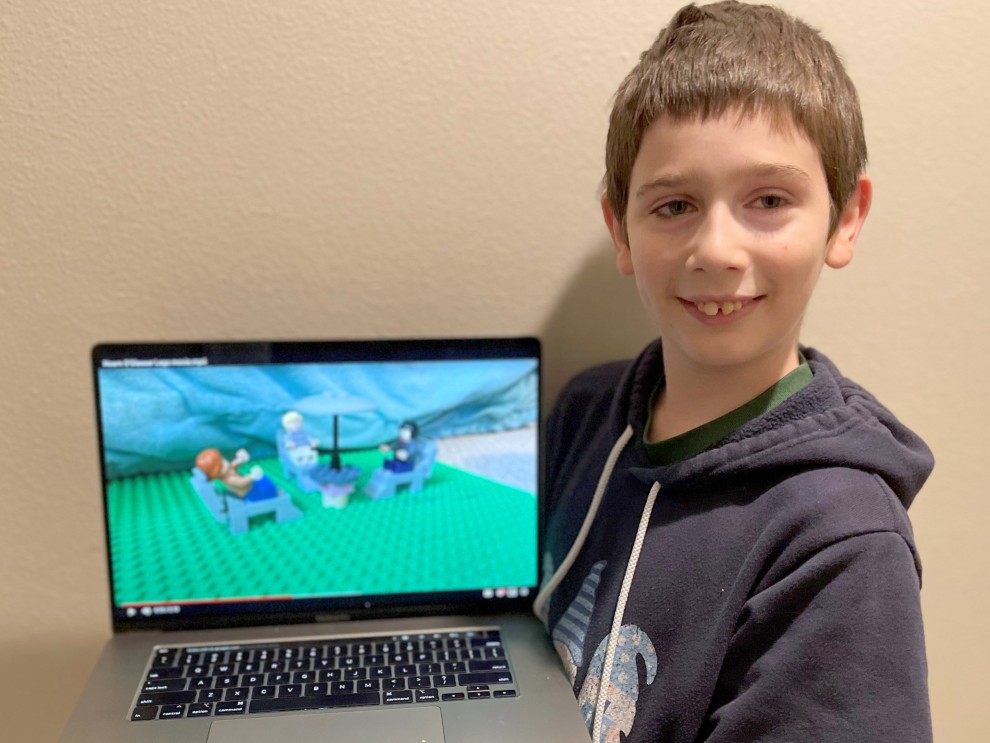 Noam Morris O’Glasser, a fourth-grade student at Portland Jewish Academy, won second prize in ORT’s Jewish Animation Competition with his submission entitled Noam Studios – the Ten Commandments.
Noam’s prize was revealed June 1 in an announcement from ORT America that also named Talia Ray, a fourth-grade student at Yeshivat Noam in New Jersey, as the first-prize winner for her submission, The Pesach Story.
“I love bringing my ‘still’ Lego figures to life and making videos to share with my friends and family,” says Noam. “I like carefully capturing each frame and moving the figures little bit by little bit to make the final video.”
Noam is the son of Dr. Avital and Ben O’Glasser.
“As parents, we were thrilled to see the hard work that Noam put into this project from start to finish,” write Avital and Ben. “It was such an amazing opportunity to take his creative energy and passion for animating his Legos, which he discovered during the months at home during the pandemic, to the next level.”
Open to grades 4-8, the competition enabled students to combine creativity with technology to make their own animated clips based on Jewish stories and themes. Using a computer and/or smartphone, plus a few common household items, the student animators were able to showcase their videos and compete for cash prizes.
Students from seven day schools submitted 23 entries, which were judged based on Jewish content and the ability to demonstrate an understanding of a Jewish story, tradition or practice, and how well the animation explains the topic. The other criteria looked at the visual appeal and how creative the clip was to watch. Finally, technical skill was evaluated based on the level of ability for each student.
“The Jewish Federation of Greater Portland and our Jewish day school community were excited to partner with ORT on this contest,” says JFGP President and CEO Marc N. Blattner. “Our school students embraced the challenge, and many entered. To have one of our students, Noam, recognized for his work is quite an achievement for him personally, his school and our entire Jewish community. May we continue to see creativity and ingenuity in our students.”
The competition is part of the ORT Programming in the U.S. Initiative. Earlier this spring, ORT provided two introductory STEM courses for elementary and middle school students on animation as well as cybersecurity to a number of U.S.-based Jewish day schools.
The panel of judges was made up of ORT America National Board and Pedagogical Committee members; Moshe Leiba, deputy director general and chief pedagogical officer of World ORT Kadima Mada in Israel; and educators.
ORT America is a nonprofit consisting of thousands of people throughout the United States who share a common, binding interest in supporting ORT, Israel and the Jewish people. Based in New York City, ORT America has a presence in eight regions across the country. ORT has been transforming lives through training and education since 1880. ORT has evolved to provide 21st century skills that empower individuals and strengthen communities and Jewish life worldwide.