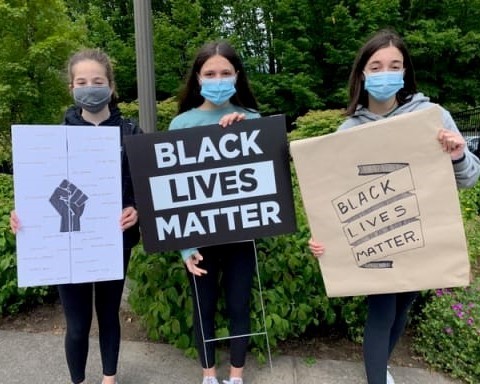 PHOTO: On June 14, PJA gathered as a kehillah (community) to stand together on Capitol Highway to show support for racial justice. The vigil attracted more than 130 people to support the Black community, voice opposition to the violence and racism Black people experience, and raise visibility to this issue in our community.

PJA shares anti-racist resources
As part of its pursuit of anti-racist education, Portland Jewish Academy has gathered resources to support the community in their own education and activism. The list includes readings/podcasts, organizations to support local Black-owned businesses and ideas for anti-racist activism. Links to the resources are available at padlet.com/mhyde/antiracist.

At PJA, students are guided to take responsibility for the world in which we live. Acts of chesed, kindness and tikkun olam (repairing the world) can help achieve social justice and pursue peace.

This summer and throughout the 2020-21 school year, PJA will work closely with Heather Clark, a consultant who works with independent schools around issues of race and ethnicity.

Portland Jewish Academy places high importance on kehillah (community), which this year’s need for physical distancing made challenging. So PJA turned to the virtual world to help maintain a sense of community. The innovations included a virtual production by third-graders and virtual talent show and trip to New York City for middle schoolers.

When distance learning began, preparation shifted to Zoom, Flipgrid and Google Classroom. Students learned Portland history and all about the city’s well-known bridges. Rehearsing and recording for the production every day, third graders attacked the project with typical Portland grit and determination. As one of the songs so poignantly states, "We get back up, roll up our sleeves and build it back better than before!" Students and families watched the production on the final day of school last month.

Despite the challenges and limitations, the Manhigut (Student Leadership) class was determined to incorporate a talent show into year-end festivities. Using Flipgrid, students submitted videos of themselves with teachers providing short introductory clips for each act, creating a talent show masterpiece.

While the pandemic prohibited the variety of field trips typical to this time of year, PJA Middle School students and staff took a virtual field trip to New York City on PJA Digital Airlines. Along with their tour groups and tour guides, students explored the sights and sounds of The Big Apple. They researched their ancestors at Ellis Island, took a virtual tour of The Met, tried their hand at recreating Van Gogh’s Self-Portrait with a Straw Hat and made Serendipity 3’s Frozen Hot Chocolate from the comfort of their own kitchens. The last stop on the tour took the students to Broadway, where they were surprised with a live Q&A session with two Broadway stars – Riley Costello from “Wicked” and Chiara Trentalange from “Girl from the North Country.”