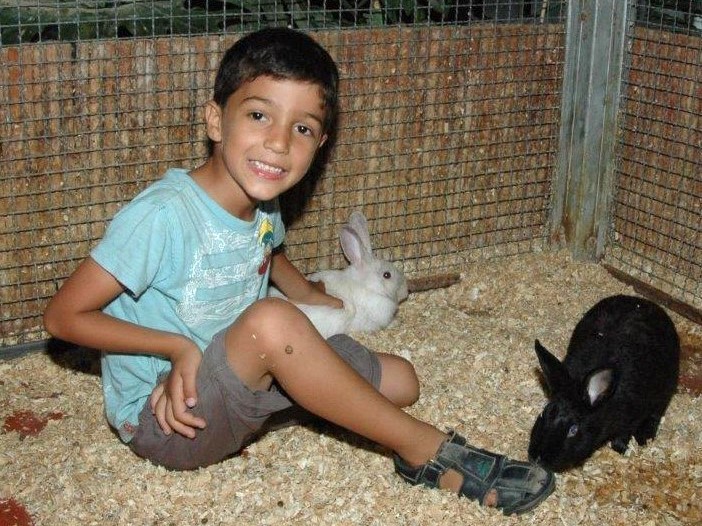 PHOTO: Children at Neve Michael Children's Village in Israel connect with animals at the Portland Petting Zoo, which was funded by a JFGP grant about 20 years ago. At-risk children at the village have benefitted from several grants from the Jewish Federation of Greater Portland for two decades. Children brought to the Village’s Emergency Crisis Center, who benefit from the current donation, cannot be photographed for privacy concerns. But Portland's Petting Zoo continues to be used in Neve Michael’s pet therapy program. “Some children respond to conventional psychological treatment, and some children need another kind of treatment,” writes Debbi Paenth from Neve Michael. “Pet Therapy has proven to be very successful for our children at risk (4-18 years old). … Working with the animals in the petting zoo teaches empathy, love and trust and other life skills these children could not learn through traditional channels. But most importantly, it opens a channel to communication, especially to children who have experienced sexual/physical abuse.”

Portland’s Jewish community has helped at-risk youth living at the Neve Michael Children’s Village in Israel for two decades; when COVID lockdowns exacerbated the stress on families, Portland stepped up again.
Each year, the Jewish Federation of Greater Portland’s Overseas Special Projects Committee allocates funds for programs in Israel that help vulnerable populations. The youth village has received funding from JFGP multiple times over the last two decades, starting with support for a petting zoo. In June 2020, Neve Michael received one of nine special project grants. The youth village received $5,000 for personal arrival packages for children arriving at the youth villages crisis center.
Neve Michael is home to over 280 children at risk in Israel, many of whom come from dysfunctional families and suffered severe emotional traumas at a tender age. Neve Michael’s Children’s Emergency Crisis Center receives 50 boys and girls a year who are removed from their homes by court order.
“I wish to express my warmest appreciation to the Jewish Federation of Greater Portland for their grant of $5,000 towards our Personal Items Package Program at Neve Michael’s Children’s Emergency Crisis Center,” notes a mid-year report on the grant by Hava Levene, who oversees programs and projects at Neve Michael Children’s Village in Pardes Hana, Israel.
The welcome gifts funded by Portland include two pairs of pajamas, seven pairs of underwear, four pairs of socks, shoes/sandals, pants/skirt, two t-shirts, a hairbrush and a toothbrush and more.
Hava writes that each child who arrives at the crisis center has their own horror story:
“Many of our children were abused by their natural parents, verbally, physically and even sexually. Some suffered horrific beatings, or witnessed cruel violence inflicted on their siblings. None of them knows what it means to be part of a normal household, to be taken care of, to feel wanted and loved.
They arrive with nothing but the shirts on their backs, or in their pajamas. They come to us as frightened little children who have lost everything. We receive them with kindness, warmth and open arms, but that isn’t enough.  We have to give them something they can call their very own. Which is why our Personal Items Package program, to which you have given so big-heartedly, is so vital for our children in those first critical moments when they arrive at our Emergency Crisis Center. …
The dedicated staff at Neve Michael works to restore the emotional well-being of our children – but that’s a long-term process that takes many years.
Your wonderful gift helps our boys and girls get over that first hurdle in the darkest moments of their lives, and for this gesture of kindness we can’t thank you enough.”
Hava adds that lockdowns mandated by COVID-19 have increased economic and mental health stressors and created social isolation for many families. For families at risk, the parents’ ability to take care of their children during this time was affected due to financial distress, exacerbated mental health issues, loneliness and lack of professional support. The link between seclusion and child abuse has been repeatedly reported by researchers, writes Hava.
One thing COVID-19 did not affect was the operation of the Personal Arrival Packages Program. Neve Michael successfully prepared and distributed the packages to the children who have arrived at the crisis center during the pandemic.
“The Jewish Federation of Greater Portland has been a blessing to Neve Michael’s 280 children at risk for over the past 20 years,” says Hava in a recent email. “We have a very deep and special relationship that I value and appreciate so much. Our boys and girls are so lucky to have your love and support. You are giving Neve Michael’s children the life that they deserve to have. I cannot wait for you to come and visit with our children.”