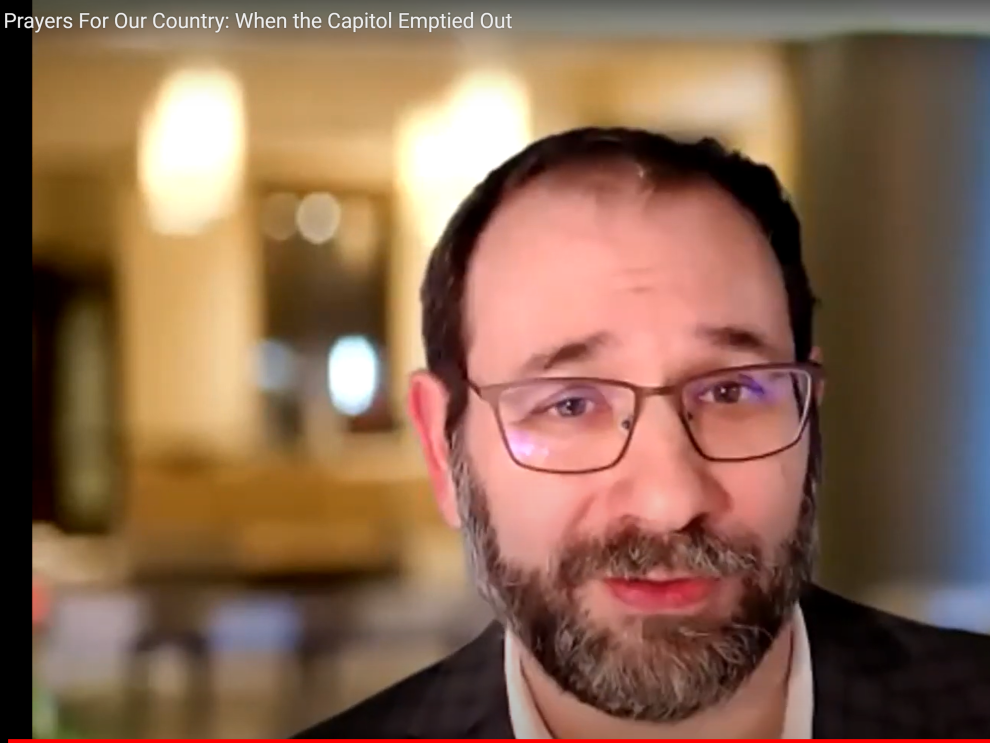 With a few changes, the following are the comments Rabbi David Kosak delivered on the evening of Jan. 6 at a hastily arranged communal gathering after the attack on the U.S. Capitol Building.

On Jan. 6, our nation’s Capitol came under attack, not from a foreign power, but by American citizens. It was a day of high emotion and a low mark in the history of our nation. It was a day of shock and upset.
Watching the attack on the Capitol in real time, my son turned to me and said, this is like a movie, but so much sadder.
It was a remarkably sad day. I know many of us shed tears. Others of us stared at our screens in disbelief, speechless. Some of us found profound wells of rage churning within.
For January 6th is the day when insurrection came to the shores of this great democracy. Sedition arrived at our capital city. Those are not empty or rhetorical words. There are legal definitions of insurrection and sedition, and Wednesday’s violent terrorist action against a sacred democratic symbol of this nation is an attack against the very authority of our nation’s government.
For most of us, we have never had to witness something like this up close. But not for all. As events unfolded, an older colleague of mine, Rabbi Barry Dov Lerner, shared the following personal reflection with me:
“In 1970 I literally fled the capital of Chile on one of the last flights to the USA if not the last one – there was no one in the airport behind me for any flight.
I am right now experiencing PTSD – reliving the panic, fear and anxiety of the unknown – watching the rioters and anti-Constitutional mob desecrate and loot the Capitol of the United States.
I flew out – in spite of the announcement that there could be bombs on the departing flights – among people praying in any known tradition, including Jews holding kabbalistic amulets and those just moving their lips in Shema.”
Few of us have the personal history that Rabbi Dov Lerner does. Our hearts may have felt squeezed by the scenes on our televisions, but most of us didn’t have to deal with such trauma being replayed within. As individuals, no, most of us don’t have that sort of experience.
Yet as Jews, we are too familiar with such terror. Throughout Jewish history, our enemies would often burn our synagogues or our Torah scrolls. They desired to destroy us by undermining the central symbols of our faith. They imagined if they stormed our most sacred buildings and destroyed our holiest text, that we would disappear.
And we might have. How many Jews gave up, converting to the dominant religion in the hopes that in this way they could shake free of the hatred and violence? Who could blame any individual for making such a personal choice, and joining the safety of a tribe.
But we did not fade from history. We survived the most excruciating trials of history, with the Holocaust being the last great attempt to erase us. This is because of a bedrock commitment to our faith, our values and our peoplehood. A noble idea, properly understood and held firmly, can not be uprooted. Not by hatred. Not by violence. Not by a mob. We are here as Jews because we understood that intangibles are more enduring than the largest edifice. We still believe in this Jewish project of justice, love and transcendence.
I think that as Americans, our Jewish history and our remarkable endurance can provide insight into this tragic moment in our nation’s history. Because a dark genie has been let out of the bottle of American democracy. I pray that these forces of insurrection will be fully tamped down and that history will show that the excesses of January 6th were confined to that single day.
But the poisonous vapors of nihilism have already been loosed on the American public. So many of us no longer believe in the rule of law or the process of consensus. So many of us no longer trust in the still unfulfilled promise of America. So many Americans no longer believe in the American project, seeing in our checkered history only the tarnished squares and not the slow creeping genius of freedom. We have lost our faith.
When you lose your faith, there is only one antidote. It is to search it out again with renewed vigor – to find a way to believe again in what matters.
We must double down. We need to double down in our commitment to democracy. We need to double down and restore faith in our institutions. We need to celebrate our free elections, especially when the person or the party we dislike wins. We need to stop demonizing one another. We need to speak to one another with kindness and compassion. We need to remember that red and blue, we are one nation. My fate is your fate. Your fate is mine. We rise or fall together.
So long as we undertake those sacred tasks, we will thrive. So long as we recommit to the intangible values that all people are created equal, we will rise. So long as we let go of our small-minded desires and turn to the good of all, we will remain invulnerable to hatred, fear, demagoguery and authoritarianism.
I am a realist. It won’t be easy or straightforward. It will demand all of our grit. We will need to connect with one another as we haven’t in far too long. But we can do it. One of the most important tools for such an open-ended project is to cling to our faith.
On Wednesday night, our community gathered online in large numbers. We turned to song and prayer, holding in front of us the most ennobling hopes and values. We took strength in one another. That matters.
The future is always uncertain. What allows us an informed optimism is when we turn toward it with the commitment of our enduring values. E pluribus unum. Let us recommit to common cause with all Americans. Let us do so with the noblest of visions.