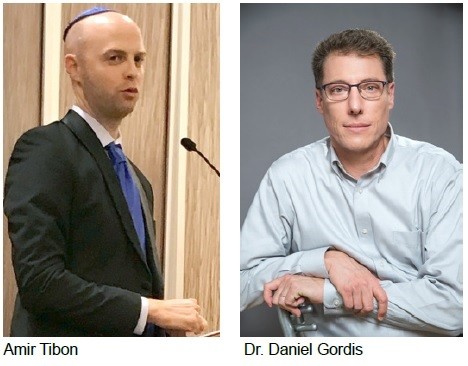 “Safe to say, this will be one of the most contentious elections in American history. People of all stripes are feeling incredibly anxious and on edge,” writes Rabbi David Kosak.
Given the circumstances, Neveh Shalom’s senior rabbi says this year’s Scholar-in-Residence program, Facing the Election: Before and After, is especially relevant. Jewish scholar and author Dr. Daniel Gordis and award-winning journalist Amir Tibon will present this year’s virtual program on two Sunday afternoons (see below).
“On two consecutive weekends, we will glean lessons from our history that offer us an example of resilience as well as use the eyes of journalism to provide some current perspective,” says Rabbi Kosak.
Personal relationships enabled Neveh Shalom to land two “big fish” for its annual Scholar-in-Residence program, which is funded by the Suher family in memory of Yoni Suher, one of three Israeli tourists killed in a 2016 terrorist attack in Turkey.
The author of 12 books, Gordis is a regular columnist for Bloomberg Opinion. His history of Israel entitled Israel: A Concise History of a Nation Reborn received the 2016 National Jewish Book Award as “Book of the Year.” The Forward has called him “one of the most respected Israel analysts around” and The Jerusalem Post listed him as one of the world’s 50 most influential Jews. He is also a personal friend of Neveh Shalom Membership and Engagement Director Michelle Caplan.
“Danny (as I call him) was my professor at American Jewish University (formerly UJ) 30+ years ago, and he also married Jon and I,” says Michelle. “I have stayed in close contact with him all these years.”
Tibon is an award-winning journalist and the U.S. news editor at Haaretz newspaper, now reporting from his home in Israel. During the first three years of the Trump presidency, he was the paper’s correspondent in Washington, D.C., where he reported on the White House, Congress and the American Jewish community. He has reported from war zones in Syria, Ukraine and the Kurdish region. He came to Portland in 2017 as the second annual Neveh Shalom Yoni Suher, z”l, Scholar-in-Residence. Yoni and Amir were first cousins.
“Yoni was very political,” says Brian Suher, who as Yoni’s uncle helps plan the annual Scholar-in-Residence program. “Yoni was already lost before the last election, but he was an American citizen, and I believe that he would have had strong opinions. Oh, how I wish I could ask. I believe that the topic would have very much resonated.”
Suher says selecting a topic always has many considerations, foremost being to meet the needs of the community. Initially he resisted the idea of a virtual program because he loves the social connection of having a live speaker. But with this year’s pandemic he says, “I will and can shed my Luddite armor and emerge with a meaningful presentation.”
Rabbi Kosak adds, “I really hope you will attend both sessions, as the topic could not be more timely or more relevant.”

FACING THE ELECTION: BEFORE & AFTER
Jewish wisdom in this time of upheaval
Sundays, Nov. 1 & 8, noon-1:30 pm