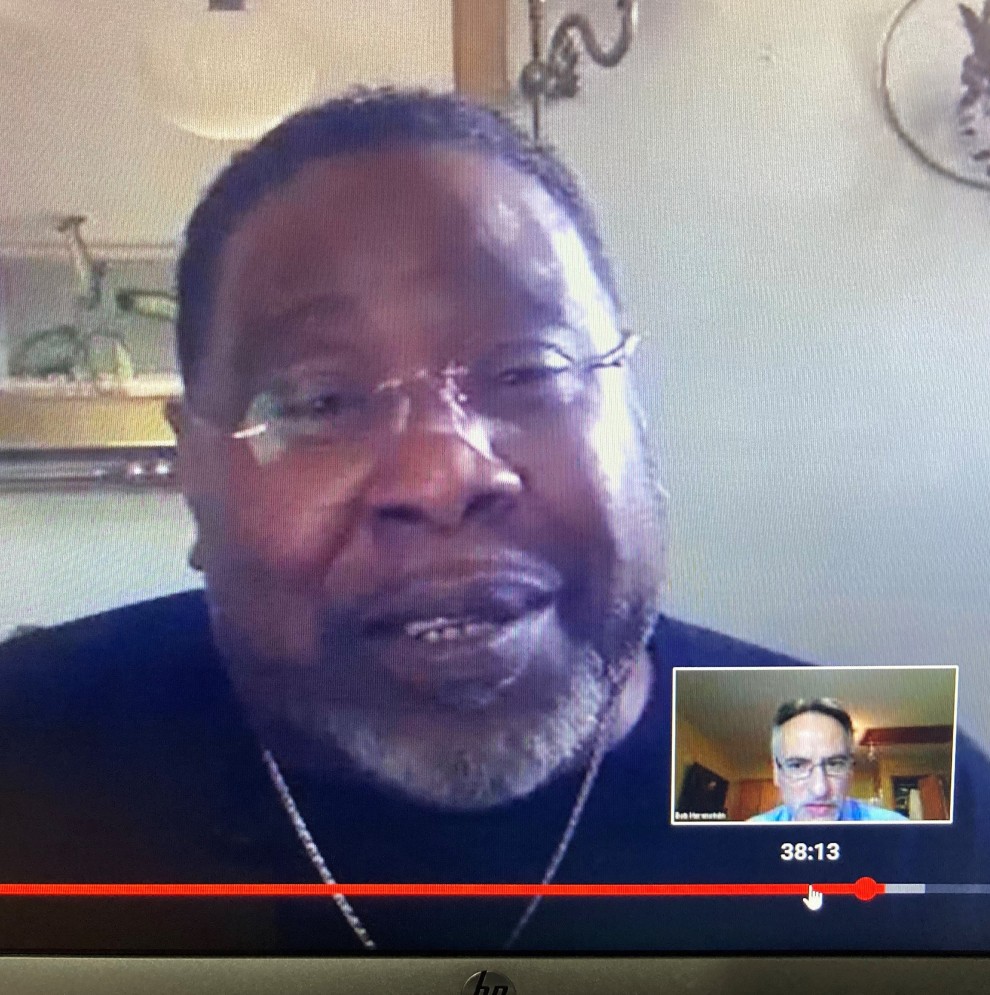 The historic connection between the Jewish and African- American communities was slated to be the focus of a series of programs all year; then Stay Home orders in March curtailed the United in Spirit programs. These connections have been reinvigorated during protests against police brutality in the wake of the killing of George Floyd in police custody.
“We did not lose our connection; we thought we had overcome … we relaxed,” says Pastor E.D. Mondainé, president of the Portland NAACP. “Our communities must summon the level of effort we displayed during the civil rights (movement).”
The Jewish Community Relations Council has developed a close partnership with the local chapter of the NAACP (JCRC, NAACP, OJMCHE and Dialogues Unlimited cosponsor United in Spirit). On June 2, Pastor Mondainé and Emmett Wheatfall joined Community Relations Director Bob Horenstein for a special edition of Weekly Wednesday Updates on fighting racism in Portland and beyond (see page 7).
Emmett, former assistant county administrator for Clackamas County and an equity and diversity consultant, has participated in the Black Jewish Dialogue groups the JCRC has hosted over the past decade. Emmett and Bob have become friends and enjoyed a seder in Bob’s home. Emmett says reaching out is important.
“Invite a black person into your space; say hello to somebody black in the grocery story,” he says. “I can’t promise you won’t get burned, but the majority of relationships you reach out to, you will be friends.”
During a May 31 Gathering of Light and Hope at Congregation Neveh Shalom, Emmett was invited by one of those friends, Steve Sirkin a former member of the JCRC, to share his poem Elegy for George Floyd (see below story).
Bob has gotten to know Pastor Mondaine over the past year and a half as they have worked on the United in Spirit programs. Now they are collaborating on ways to keep the momentum going since events have been postponed until next year.
United in Spirit had planned a Day of Remembrance June 19 to memorialize the victims of the unspeakable horror of 250 years of lynching in America. “We’ve postponed that until late June next year,” says Bob. “We wanted it to be more than a virtual event.”
Also postponed is the civil rights mission to the American south to learn together about the important history of the civil rights movement and, more importantly, about the injustices that still plague our society 60 years later. That program, co-led by leaders from the Jewish and African-American communities, has been rescheduled for Oct. 10-12, 2021.
Coinciding with the launch of United in Spirit, the Oregon Jewish Museum and Center for Holocaust Education opened the exhibit Southern Rights, exploring the racially segregated proms and homecoming rituals in Montgomery County, Georgia.
OJMCHE Director Judy Margles shares some books and resources she has found to understand and fight racism: “The three books at the top of my list right now are Racism Without Racists by Eduardo Bonilla-Silva, How to be an Anti-Racist by Ibram X. Kendi, and White Fragility by Robin D’Angelo. You can find a great compilation of useful resources at bit.ly/ANTIRACISMRESOURCES).
Lastly, nmaahc.si.edu/learn/talking-about-race, produced by the National Museum of African American History, provides a number of tools to guide difficult conversations.”
Portland Jewish Academy also has found resources for families that support teaching children about antiracism and related topics: padlet.com/mhyde/antiracist.
In his letter to PJA families, PJA Executive Director Steve Albert shared the following paragraph from PJA’s Middot (values) statement: “The day is short, the work is great. You are not expected to finish the work, but you are not free to desist” (Pirkei Avot 2:20-21). At PJA, we are guided and inspired to take responsibility for the world in which we live. Through acts of Chesed - kindness, and Tikkun Olam - repairing the world, we see ourselves as agents of change who can achieve social justice and pursue peace.
Those values have “come to mind over and over again in recent days,” wrote Steve. “The past few days have been difficult ones, as we have been confronted, yet again, by violence against blacks and the tragic impact that systemic racism has upon our country… Our commitment to social justice, as Jews, as Americans and as human beings, is being tested, and silence is not an acceptable response.”
Emmet notes that creating a diverse world for kids sets the stage for more understanding as they get older “There are plenty of books that have black, Asian, indigenous … faces.”
The JCRC is a co-signer of a “Statement of Solidarity Pledging to End Systematic Racism in Law Enforcement and Work for a Just Society,” created by the Jewish Council for Public Affairs.
The Oregon Board of Rabbis also issued a statement of support for justice in the wake of Floyd’s death (see statement below elegy).

An Elegy for George Floyd by Emmett Wheatfall

My fellow citizens, in the immortal words of the late great Martin Luther King Jr.,

In essence, we’ve come here to recall that despicable horror of police brutality,

Colin Kaepernick, another black man, took a knee for racial and social justice. George Floyd, cuffed, held face down on that dirty asphalt street, part and parcel in the land

of the free, land of the brave, took to his neck that white cop’s knee. So, we,

people of color, with many of our white brothers and sisters shout,

We hear George Floyd cry out,

They’re going to kill me.

So, we, people of color, with many of our white brothers and sisters shout,

In a nation striped and cloaked in red, white, and blue, George’s life

was snuffed out by a white cop wearing his dress duty blue. That white cop

did what COVID-19 could not do, George Floyd was dead before the Code blue.

George was a son of America, the seed of a black man,

the fruit of a black woman’s womb; therefore, we abhor the murder

In America, it is tradition

to destroy the black body.

America, the poet Langston Hughes is noted for having said,

My fellow citizens, George Floyd too, was America.

So, we, people of color, with many of our white brothers and sisters echo,

BOARD OF RABBIS STATEMENT

The Oregon Board of Rabbis issued the following statement on June 4 on the aftermath of the murder of George Floyd:
“Justice, Justice shall you pursue, that you may live” (Deut 16.20) is a central ethic of the Jewish people.
Too often victims ourselves at the hands of uniformed representatives of the state, we Jews know that state power can be abused by unethical individuals, and we decry the murder of George Floyd, like so many others unjustly deprived of their lives, and thus of the promised rights of every resident of the United States of America to life, liberty and the pursuit of happiness.
In the face of injustice at the hands of white supremacists, we declare that we cannot be silent, and we will not be moved. We call upon the governing bodies of our neighborhoods, counties and state to respond to the police violence and murder, to the ongoing injustice of unequal protection before the law with a renewed effort to hear the anguished voices of our black neighbors, and to respond with compassion and with the application of equal justice under law to their fear and their agony.
For the sake of my kin and friends,  I pray for your well-being; for the sake of the house of our God, I seek your good. (Psalm 127)
Destruction of property is always regretful, but destruction of human life is an incalculable loss. We call upon all those who love peace to join with us in the declaration that peace must include safety, bodily integrity, and human decency for us all. Peace must include justice for the most targeted among us, or it is not peace.
We call upon all those elected representatives of our communities, all those entrusted with the good and welfare of all our neighbors and friends, to redouble your efforts to ensure that “justice will burst forth like a mighty flood stream, and righteousness like a flash flood” (Amos 5.24) sweeping away all evil in its path.
We decry police brutality and use of lethal force, flash bangs, tear gas, rubber bullets and other weapons of war. We also call for an end to the relationship between the Portland police and the military, particularly purchasing surplus military equipment.
We join with black justice seekers and will work for an end to white supremacy, white nationalism and all forms of anti-black oppression, including mass incarceration, broken windows policing, and the war on drugs.

From Be'chol Lashon: Black Jewish Voices on their experiences and identities

From Joyous Justice: April Baskin is available for Diversity Coaching and Consulting

From Prizmah: Talking to Students about George Floyd and Racism

From PJ Library: Resources for Talking With Kids About Racism