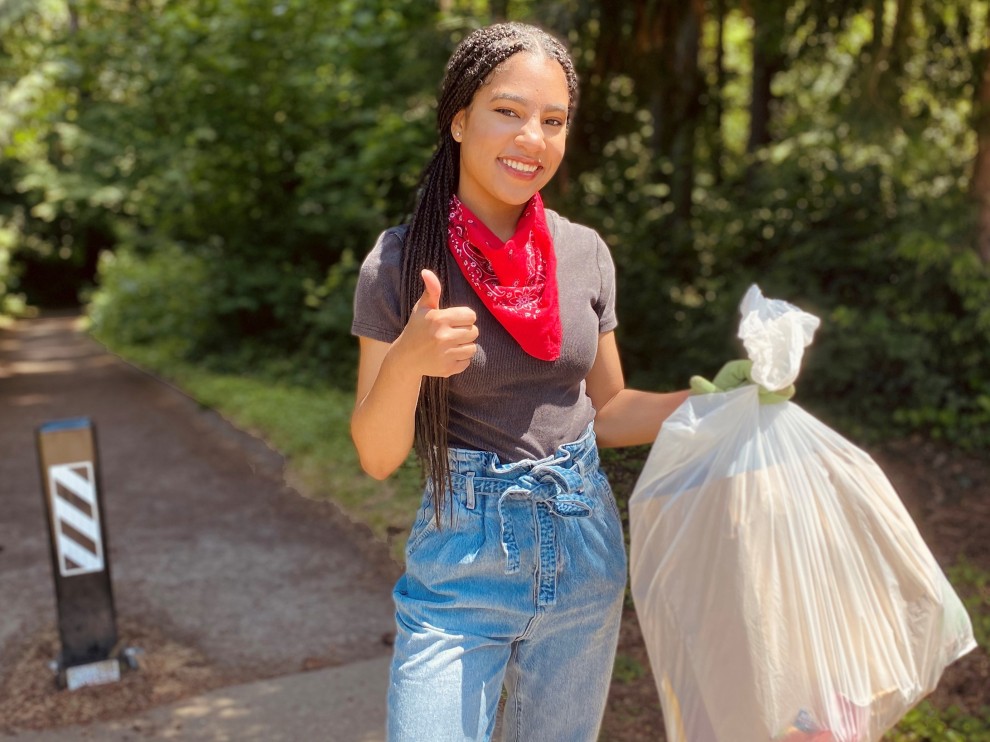 A friendship that budded online during stay home orders has spawned an environmental movement consistent with the physical distancing essential during the continuing pandemic.
Sharona Shnayder, a former PDX Hillel board member who plans to move to Israel next spring, and Wanda McNealy founded Tuesdays for Trash as the two completed their final year at Portland State University during a year upended by COVID-19.
The two students met last fall working at Portland Gear. When the world shifted life to a virtual plane, Sharona says they “started connecting more through Instagram and then having conversations over Facetime cause we were bored and needed a friend to talk to – and now here we are as co-founders of an environmental movement!”
Under the Governor’s orders to “Stay Home, Save Lives,” the two activists felt compelled to find a way to positively contribute to their community while staying safe.
“We started picking up trash on a Tuesday while hanging out at our University Park Blocks when the idea struck us,” says Sharona. The two decided to model their movement after young climate activist Greta Thunberg’s Fridays for Future.
“Essentially, by having the name be Tuesdays for Trash, it’s an immediate reminder and call to action for individuals to consistently pick up trash on that day of the week, aiding them in making it a routine part of their week as opposed to a one-time endeavor,” says Sharona.
They realized that picking up trash is a simple and safe way to practice environmental activism that anyone can do wherever they are. So they launched Trash for Tuesdays with the notion that small acts of change when multiplied can transform the world.
Repairing the world has been a driving force for both women.
Wanda, who graduated in June with her bachelor’s in communications, has volunteered most of her life at food banks, homeless shelters, wildlife refuges and summer camps for children with disabilities. After marching in protest against the Dakota Access Pipeline in 2016, she decided to commit her life to encouraging positive environmental change.
Sharona graduated in three years with a degree in accounting. Originally from Nigeria, she has lived in Oregon most of her life. She says she was inspired to take action and integrate sustainability into all facets of her life after watching Greta Thunberg’s 2018 speech at the United Nations Climate Change Conference.
Sharona says social action draws her to Judaism. Though her dad is Israeli, she says she didn’t get much of an introduction to the culture growing up. “Which is why I got heavily involved in college and continue to surround myself by it,” she says. “I love the traditions and culture that comes with Judaism and how kindness just radiates from every Jewish person I’ve met.”
Sharona has been involved with Hillel/Jewish Student Union since she arrived at PSU in fall 2017. She served on the board for the 2018-19 school year.
“It has been so wonderful to see Sharona live out the value of tikkun olam through her environmental work,” says PDX Hillel Executive Director Hannah Sherman. “We are so proud of her and can’t wait to see where she will go from here.”
Future plans for Tuesdays for Trash include working with Metro to identify areas that need litter pickup. They also are working to develop partnerships with OurStreets PDX, SOLVE Oregon, Our Climate and SAGE (Senior Advocates for Generational Equity). Portland Gear has provided some social support.
“If people want to get involved with us, all they have to do is go out on a Tuesday and pick up trash, then share it on social media tagging us and using our hashtags #TuesdaysForTrash or #T4T,” says Sharona.
For more information, visit tuesdaysfortrash.com.