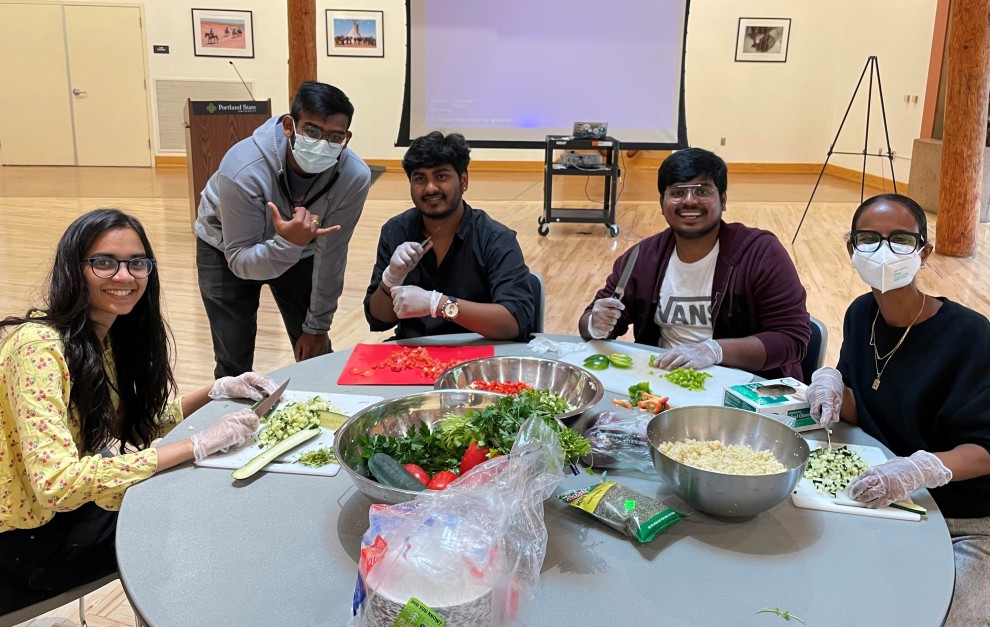 PHOTOS: Portland State University students from PDX Hillel, CHAI (the Cultural and Historical Association for Israel) and MENASA (the Middle East North Africa South Asia) cultural center came together for a night of friendship, coexistence and dialogue centered around cooking (and eating!) Middle Eastern food as a group.

BY DEBORAH MOON
Jewish and Israeli students were able to start down the road to coexistence with their Middle Eastern counterparts at Portland State University last month.
Last summer, when violence surged between Israel and Hamas, student governments in Corvallis and Eugene circulated inflammatory, anti-Israel statements.
Concerned about what the campus climate would look like for students at PSU, PDX Hillel decided to revisit its relationship with the university administration.
PDX Hillel Executive Director Hannah Sherman met with PSU President Stephen Percy and Dr. Amy Lambert, the new vice president of diversity, equity and inclusion.
“The goal was to talk about what we were seeing on college campuses nationwide and how the university could support our Jewish and pro-Israel students on campus,” says Sherman.
Sherman praised Dr. Lambert for connecting the Hillel with Ahmed El-Mansouri, the new program coordinator for
MENASA (the Middle East North Africa South Asia) cultural center. In previous years, Jewish students have not felt welcome at MENASA activities, Sherman adds.
“Israel is part of the Middle East – it falls into that category of what MENASA covers,” says Sherman. “She (Dr. Lambert) really wanted to make sure that we had that relationship so we could form partnerships.”
The partnership is flourishing.
“Thank you to Ahmed El-Mansouri, the new program coordinator for MENASA, for welcoming in this new era of acceptance and ‘allyship,’ ” says Sherman.
The two groups started meeting in the fall to discuss what they wanted to achieve with the partnership. “These are all students at PSU – that’s the one thing they have in common – so let’s start with that very basic identity we all share,” Sherman says they decided. “The goal was to do two events, one in the winter and then one in the spring. Because in the winter everything shut down again with Omicron, we unfortunately were not able to do that first event. Spring cooking was the first event.”
She also credits the PSU administration’s support for “this really beautiful partnership that I think will only expand.”
“It was so joyful, and it was so beautiful,” says Sherman of the cooking event. “There were so many different languages that filled up the room, and it was the epitome of coexistence. … They really built these friendships that I think will help further coexistence programs and activities next year.”
PSU students who want to be involved in PDX Hillel or the partnership with MENASA can visit pdxhillel.org or email Sherman at hannah@pdxhillel.org.