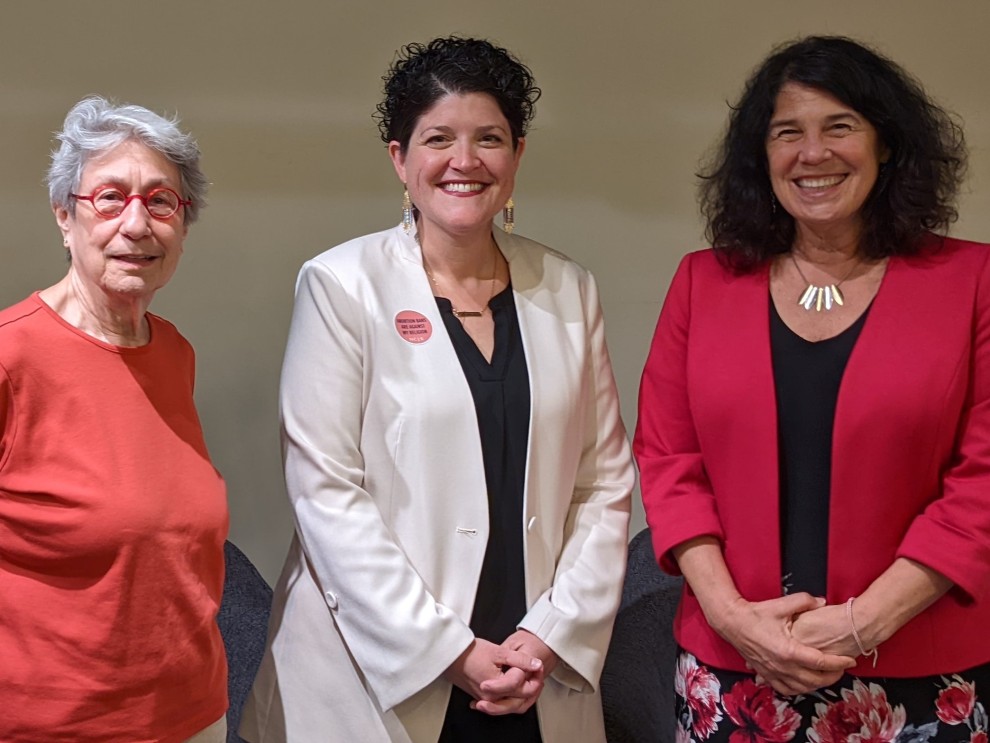 PHOTO: Panelists for the June 30 program “Overturning Roe v. Wade and the Jewish Response” were, from left: Portland poet and essayest Judith Arcana, who worked in a pre-Roe illegal abortion clinic; Rabbi Rachel Joseph of Congregation Beth Israel; and emergency physician and County Commissioner Sharon Meieran. Read about the panel below story on rabbis comments.

Rabbis speak out on Roe decision

"From the classical Jewish perspective, abortion is considered murder for non-Jews. This is explicit in Sanhedrin 57b and codified by Maimonides, Kings 9,4: 'A Noahide who murders a soul, even a fetus in its mother's womb, is killed over it.'The Minchas Chinuch 295 states that a non-Jewish doctor may not save a woman's life by aborting her fetus.

Non-Jews should be encouraged to follow the Divine Will for them as reflected in the Noahide laws. Hyping the tragic crime of rape to allow murder is unconscionable. One crime does not justify another.

Perhaps, if our society chooses to reject cruelty, and moves to foster the compassionate defense of our most vulnerable lives, the cavalier mass murderers that have come to plague us would also heal, and develop a healthy aversion to murder through the broader recognition of the sanctity of all human life, as endowed with imago Dei."

“Abortion bans are against my religion,” said Rabbi Rachel Joseph during opening remarks at the June 30 panel discussion “Overturning Roe v Wade and the Jewish Response.”
Also on the panel were Judith Arcana, a Portland poet and essayist who was a member of Chicago’s pre-Roe underground abortion service, and Dr. Sharon Meieran, a Multnomah County commissioner and emergency room physician. Hundreds of people attended online and in the auditorium at the Oregon Jewish Museum and Center for Holocaust Education. The program was co-sponsored by the Jewish Federation of Greater Portland and Congregation Beth Israel, where Rabbi Joseph serves as associate rabbi.
During the Q&A session, Rabbi Joseph elaborated on her opening statement.
“My religion, the God of my understanding, says abortion is OK and sometimes mandated,” she said. She added that over the past 50 years, “We have ceded religion to the evangelical Christians and the religious right … who do not speak for us.”
She serves on the boards of Planned Parenthood Columbia Willamette and Planned Parenthood Advocates of Oregon and is a member of the National Clergy Advisory Board for Americans United for Separation of Church and State.
She said it is important to be explicit on her views: “I am religious, and I believe in all aspects of reproductive freedom. I believe in abortion.”
Arcana, who appears in the new HBO documentary “The Janes,” provided firsthand historical perspective on living when abortion is illegal. She was one of about a half-dozen “Janes” who “learned the medical stuff” and performed low-cost and free illegal abortions in the late 1960s until a couple months after Roe v Wade made abortion legal in 1973.
“When abortion is not health care, it is homicide … it was in Illinois, and I’m betting it will be again,” said Arcana.
Dr. Meieran said the abortion issue is front and center with all her identities. Though she does not consider herself religious, she said that as a Jew, those who argue that abortion is a religious issue “are violating my religious freedom.”
As an ER doctor, she treats “people who have fallen through the cracks of the social system that is supposed to protect them. …I see the consequences for people who have not had reproductive health care.”
States where abortion is now illegal have threatened to prosecute doctors who perform abortions on those who travel to states where it is legal.
“This is the scariest time I have experienced,” Dr. Meieran said. “We are going to fight back.”
When asked how to fight back, Rabbi Joseph said “Voting is number one.” But she added it is important to engage communities in conversations for reproductive freedom that go beyond abortion to include “access to all we need to raise happy, healthy families.”
Arcana said that pre-Roe, she learned there are simple things we can do. Not everyone has to be a strategist. “Do the grunt work – sign up, show up and do simple things that are necessary.”
She also noted that just three years after Roe, the onslaught on abortion rights began. Congress passed the Hyde Amendment, which bars the use of federal funds to pay for abortion except to save the life of the woman or if the pregnancy arises from incest or rape. The relentless attack on the right to an abortion took 45 years.
“Now it has to be done in reverse,” said Arcana.
The panel was moderated by Reed College Professor Steven Wasserstrom.
OJMCHE has posted the recorded panel discussion on its website: ojmche.org/events.