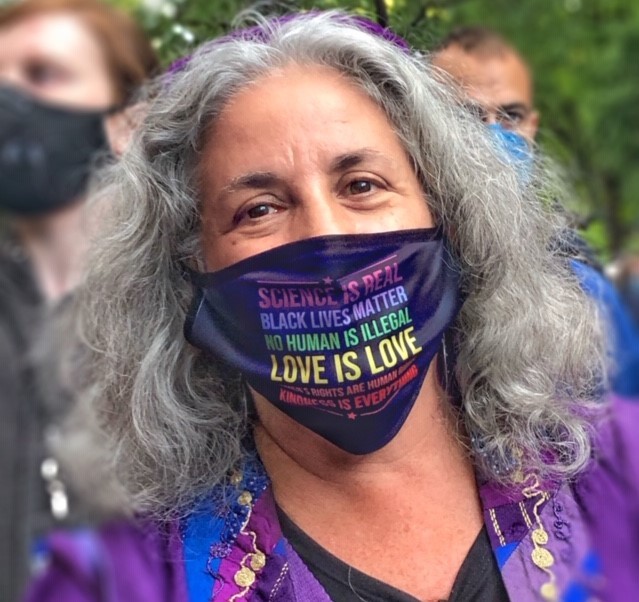 Rabbi Debra Kolodny to head east
After 10 years in Portland, Rabbi Debra Kolodny will relocate to Amherst, Mass., on June 4 with wife, Brio, and their dog, Cinnamon.
Rabbi Debra was a co-founder of Portland’s UnShul in 2015 and will continue to serve that congregation. In 2018, UnShul members opted to transition from an event- and activity-based model to a Renewal congregation soaked in ecstatic and contemplative prayer, mystical Jewish learning, psycho-spiritual healing and radical political engagement. Recent Zoom services have acclimated people to distanced but intimate services, so Rabbi Debra and the UnShul will continue together online, with High Holy Days in person when allowed. 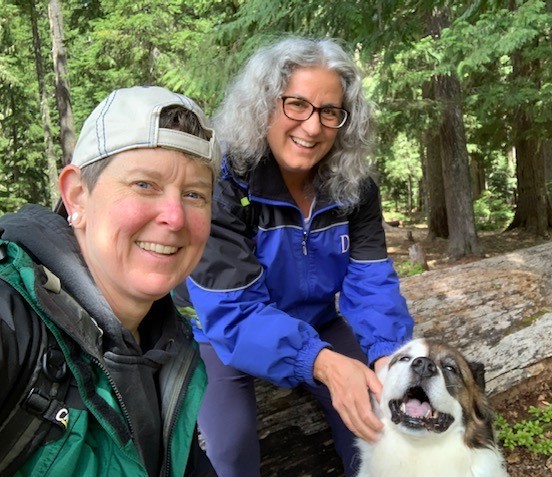 “After 10 years in the cross hairs between armed White nationalists and violent police, forest fires and a PNW culture that was never quite a match, I’m excited to relocate to a smaller area drenched in leftist politics, Jewish and queer communities, and amazing universities,” says Rabbi Debra.
Originally from New York and Washington, D.C., Rabbi Debra looks forward to returning to the East Coast. The rabbi’s brother and about 30 friends, including eight rabbis, live in western Massachusetts.
Though excited to explore new horizons, Rabbi Debra has some incredibly fond memories. At their first High Holy Days at P’nai Or in 2011, Rabbi Debra integrated part of the Occupy Wall Street manifesto into the Kol Nidre drash. This inspired a congregant to build a sukkah at the Occupy Portland encampment and ask Rabbi Debra to lead a teaching. For three years they served as executive director of Nehirim, a national organization of lesbian, gay, bisexual and transgender Jews. Before it closed in 2015, they produced a Queer Clergy for a Black Lives Matter conference with local BLM and Don’t Shoot Portland activists.
Over the past four and a half years, Rabbi Debra has attended hundreds and spoken at dozens of marches and forums against Trump policies and in support of immigrant rights and ending police violence. They also gave testimony to the state legislature and city council and got arrested to support refugee rights.
In addition to continuing to serve the UnShul, which is populated with serious Torah divers, social justice activists and LGBTQI+ folks, Rabbi Debra will also continue with activism, producing their musical Princess Prophet, and teaching and consulting locally and nationally.
To learn more about Portland's UnShul, email UnShulAdmin@asthespiritmovesus.com. 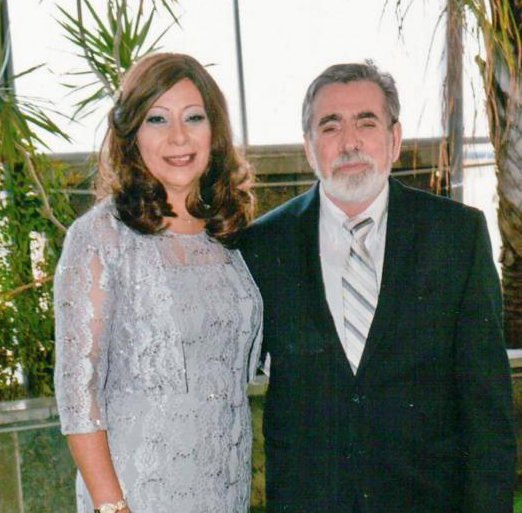 On Feb. 28, Congregation Beit Yosef Rabbi Shlomo and Dorit Truzman left Portland for Israel to make aliyah. The couple will continue as Rabbi and Rabbanit Emeritus from Israel for the Orthodox Sephardic congregation, which is located at 4200 SW Vermont St. on the edge of Portland’s Gabriel Park.
“Because of the virtual world we now live in, the Truzmans are instantly accessible, and they will remain close to the congregation,” says Beit Yosef President Benaya Laws. “They will remain active with our congregation … providing direction on policy and our customs.”
Rabbi Eliyahu and Rabbanit Malky Weisman, who have been members of the congregation, take the on-the-ground rabbinic lead related to supervising the kashrut, providing classes for Jewish education and determining immediate halachic issues.
The Truzmans came to Portland in 2003. They founded Congregation Beit Yosef in 2007 and have led the congregation since.
Rabbi Truzman grew up in Melilla in Spanish Morocco. He did his rabbinic studies in London, England, and served as the spiritual leader of one of the two Sephardic synagogues in Manchester, England. He held rabbinic posts in Hong Kong, Guatemala, Aruba, Canada and Arkansas before moving to Portland. The couple met when he served as a rabbi in Guatemala, where Dorit Truzman was born and raised.
“They are beloved and brought to Portland their rich Sephardic tradition infused with their characteristic Sephardic warmth,” says Laws. “Through their continued leadership, Congregation Beit Yosef is remaining alive and active in Portland.”
Beit Yosef is named in honor of Maran Yosef Karo (1488-1575), author of the last great codification of Jewish law, the Shulchan Aruch.
“Congregation Beit Yosef is so grateful that the Weismans are stepping into a rabbinical leadership role,” says Laws. In addition to supervising kashrut and leading classes, Rabbi Weisman will be the authority to determine immediate halachic issues.
Beit Yosef is returning to in-person Shabbat services and will hold services the first two days of Pesach, as well. Doors from the congregation’s building will open into an adjacent tent to combine indoor and outdoor open-air seating. People can register for services on the website www.beityosef.org.

More Transition News: Rose, Levy, Boettiger
Other Oregon congregations will also see changes in rabbinic leadership this year. Stories are planned on the following transitions.
• Rabbi Joshua Rose announced in January 2020 that he planned to conclude his role as Shaarie Torah’s rabbi in June of 2021. Rabbi Rose and his family will stay in Portland and plan to remain connected to the Shaarie Torah community. The board and rabbi search committee are interviewing candidates to fill the post.
• In 2014, Rabbi Gadi and Eve Levy moved to Portland to work for and within the Jewish community. Since 2018, the couple have served as rabbi and rabissa of Congregation Ahavath Achim, Portland’s 105-year-old Sephardic synagogue. Earlier this year the couple announced they will move in June to Deerfield, Ill., a suburb of Chicago, to lead L’Chaim Center, an outreach organization.
• Rabbi Joshua Boettiger has announced he will be leaving Temple Emek Shalom of Ashland in July. Rabbi Boettiger has accepted a post as the Jewish Chaplain at Bard College in upstate New York. He will also teach some Judaic studies classes at Bard. He also will serve (primarily remotely) as the Associate Rosh Yeshiva for the Center for Contemporary Mussar based in Philadelphia.