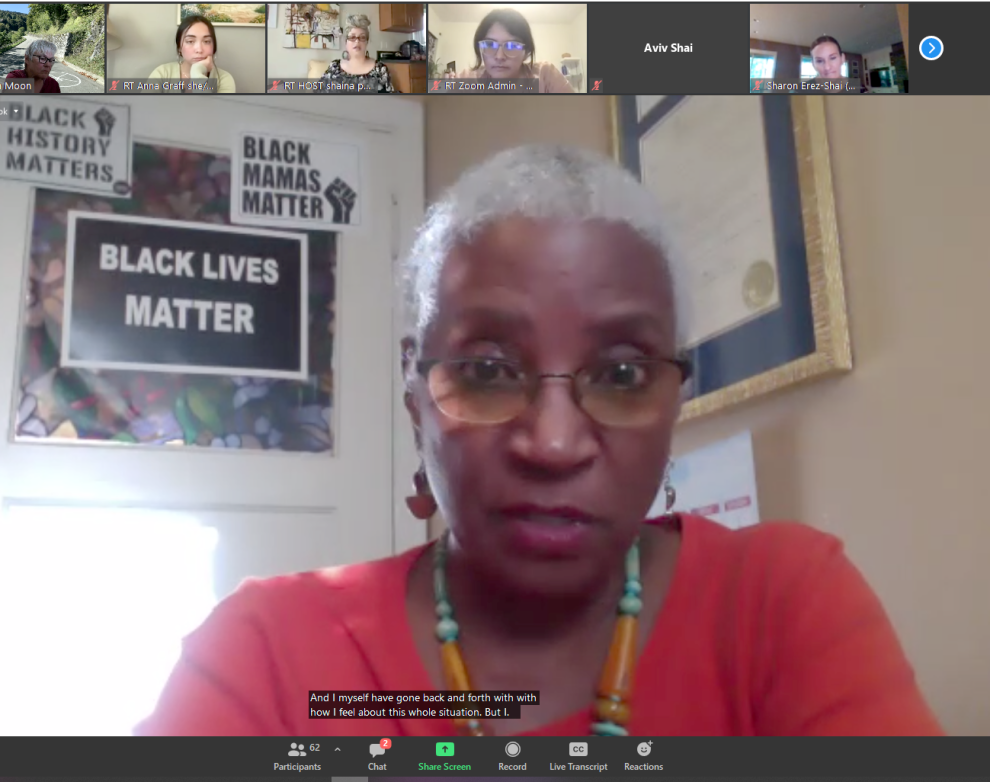 BY DEBORAH MOON
Portland-based Race Talks, which hosts difficult conversations to inform people and build relationships, presented “How David Became Goliath: Israel’s 100 Year War on Palestine” on June 17.
“When I heard the title … I was hesitant about participating,” said Sharon Erez-Shai, who was born in Tel Aviv and moved to Portland in 2016. “I understand by inviting me, you are willing to listen to the other side and keep an open mind.”
One of the five panelists, Ramzy Farouki pulled out during the program. In an email, which the moderator read during the program, he objected to both Erez-Shai’s participation as a former employee in the Israeli government and to the contextual history film from Vox shown at the start of the program. Farouki is the son of Palestinian refugees and the founder of the Center for the Study and Preservation of Palestine in Portland.
“It was not my intent to give a skewed point of view or to offend Ramzy,” said Race Talks Founder Donna Maxie, noting people have been fighting over that land for thousands of years. “Our goal is for people to learn.”
“I can’t feel anyone can walk away from this discussion and feel they have not had a positive presentation,” she added.
“Are we ever going to have a solution to this problem?” asked Maxie.
Maxie’s daughter Shaina Pomerantz, who is Black and Jewish, said she hosted the talk with “an open heart and open mind.” The panel also featured Asma Taha, Ph.D., Palestinian-American nurse practitioner at OHSU; Ned Rosch, cofounder of the anti-Israel Jewish Voice for Peace in Portland; and Bob Horenstein, director of community relations and public affairs at the Jewish Federation of Greater Portland.
The daughter of 1948 refugees from Yafa, Dr. Taha shared a personal story of her relationship with the land. She heard her grandparents’ stories of Yafa all her life. Now she goes to the West Bank and Gaza one to two times a year with a children’s health organization.
“After many decades, I will always identify myself as Palestinian and hope I will be able to go back one day,” she concluded.
Erez-Shai is an adjunct senior instructor in world languages and literatures at Portland State University. She also shared a personal story of her ties to the land. Her mother was born in 1912 in Tel Aviv and her father was a Holocaust refugee. The “oldest history book, the Bible” and archaeological findings connect her to the land.
“My roots connect me to the Hebrew nation,” said Erez-Shai.
She recognizes that Palestinians also feel a historic connection to the land and see themselves as a nation.
“When people see themselves as a nation, you can’t argue,” she said, adding “I believe in a two-state solution.”
She noted that Egypt and Jordan “did not permit the Palestinians to create a nation when they were in Gaza and the West Bank (1948-67).”
“I see the Palestinian people; I also want to be seen,” Erez-Shai added.
Rosch, who was raised in an observant Jewish family and strongly identified with Zionism, said he now “stands as a Jew in solidarity with Palestinians.”
“Nothing is normal in Gaza,” said Rosch, who spent two weeks there in 2104 teaching yoga in refugee camps. “Fourteen years of an illegal Israeli siege have ripped apart hopes.”
Rosch said he now sees what he once viewed as a triumphant return to an empty land as ethnic cleansing.
“If Israel is committing ethnic cleansing, they are incredibly bad at it,” responded Horenstein, noting the Palestinian population has increased much faster than the Jewish population.
Noting he is married to an Israeli woman of color, Horenstein said 50% of Israel’s Jewish population are people of color.
He said his father-in-law hired many Palestinians during the 1990s for his construction company which resulted in “the personal interactions necessary for there to be peace.”
Horenstein said both he and the Federation support a two-state solution, and Federation has funded several co-existence programs in Israel.
When the Jews accepted the 1947 United Nations plan to partition the land into two states, “all the Arab countries rejected it,” he said. “Had they not, the Palestinians could have been celebrating 73 years of independence.”
For more information on Race Talks, visit racetalkspdx.com/.