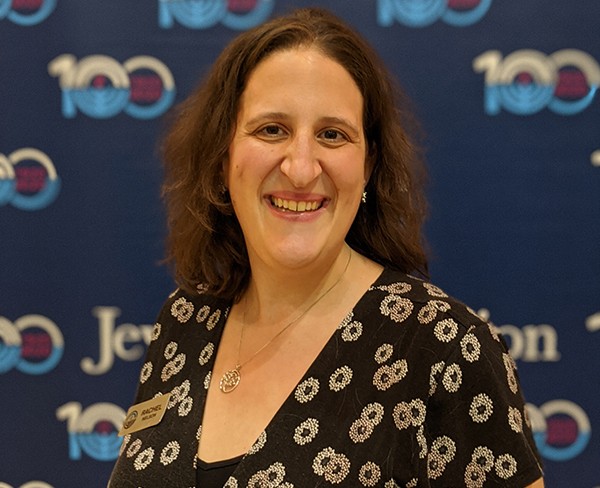 Rachel Nelson, director of intergroup outreach for the Jewish Federation of Greater Portland, is one of 30 people selected for the Israel Policy Forum’s 2020 cohort of Charles Bronfman IPF Atid Conveners. This group of young professional leaders will receive training on pragmatic policy and modeling informed discourse to make them sharper analysts and more confident champions of a sustainable two-state solution.

Now in its third year, the IPF Atid Charles Bronfman Conveners program empowers emerging Jewish community and policy leaders by equipping them with the resources to advance the Israel Policy Forum’s vision of a Jewish, democratic and secure Israel. In light of the COVID-19 pandemic, this year’s summit will take place virtually, with ongoing opportunities for conveners to engage with one another remotely.

“I am honored to have been accepting into this cohort,” says Rachel. “The access to the presenters and information will enable me to advocate more effectively for a two-state solution.”

“We are thrilled to have Rachel participate in the IPF cohort,” says Bob Horenstein, JFGP director of community relations and public affairs. “IPF, like the JCRC, believes that a two-state solution is still the best way to ensure that Israel will remain a Jewish AND democratic state, but it also gives primacy to maintaining Israel’s security within the context of any future resolution of the Israeli-Palestinian conflict.”

Rachel has been on the JFGP staff for seven years. She lived in Israel for four years in the mid-1990s with her family while she was in middle school and high school. She has been a passionate supporter of Israel both professionally and personally ever since. Rachel has a BA in family and human services from the University of Oregon, a BLit and MAEd with a focus in experiential education from American Jewish University.

“I am very lucky to be involved in all areas of the JCRC – Bob has been a great mentor,” she says.

The 2020 conveners program comes at a pivotal moment. The past 12 months have seen the mainstreaming of West Bank annexation in Israeli politics and American foreign policy, representing one of the gravest threats to the future implementation of a two-state solution. Meanwhile, the COVID-19 pandemic has compounded the uncertainty surrounding an already divisive election cycle in the United States. In this environment, IPF’s work mobilizing the next generation of Jewish community and policy leaders in support of two states is as pertinent as ever.

As with previous cohorts, this year’s conveners will meet with current and former senior government officials and top policy analysts from the United States and the region as well as American Jewish community leaders. They will also participate in professional and leadership development workshops.

On completion of the program’s signature summit, conveners will each develop their own projects. These initiatives bring the lessons conveners learned home, building support for a viable two-state solution and a more nuanced dialogue on the Israeli-Palestinian conflict in their respective communities.