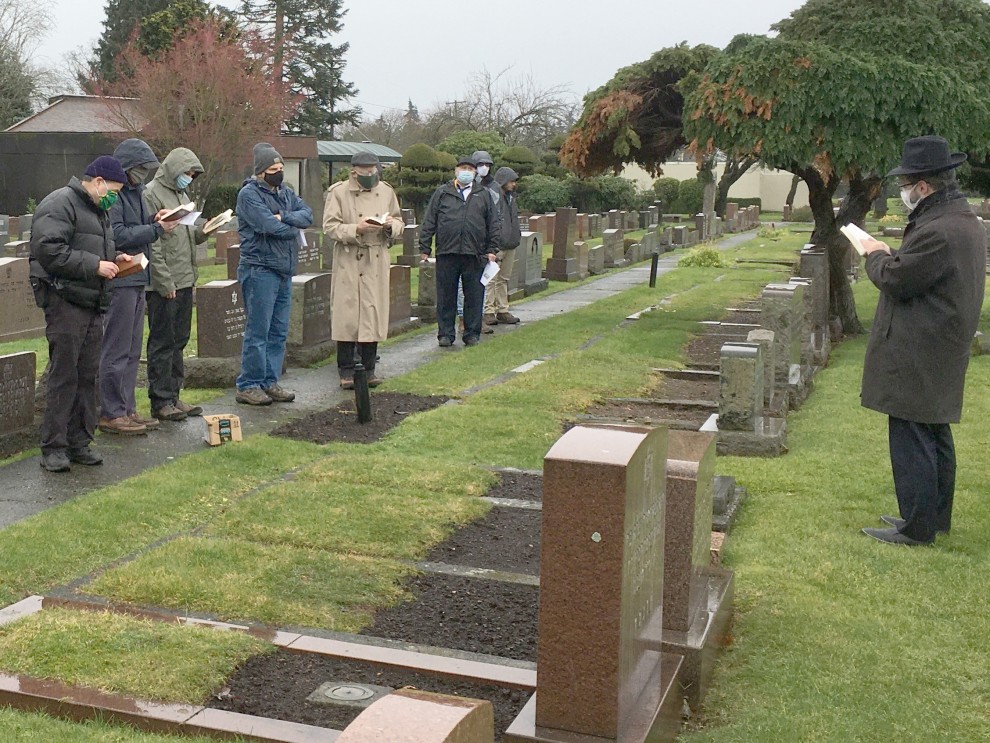 Through a long chain of Jewish connection, Abraham Mordechai Zaidel of Israel reached out for help locating the grave of his grandfather, a Holocaust survivor for whom he was named. His grandfather had come to Portland after the war and died here in 1960.
The family knew only that he had died in Portland. They didn’t realize there is more than one Jewish cemetery in the area, and they had tried several times without success to locate the grave.
The grandson, who lives in Beit Shemesh, was hoping to arrange for a Kaddish to be said at his grandfather’s grave on the occasion of his 60th yahrzeit, the 5th of Tevet.
After some digging (the grandfather spelled his name “Seidel”), I found an entry on the Jewish Online Worldwide Burial Registry, hosted by JewishGen.org, noting that Mr. Seidel was buried in Congregation Shaarie Torah’s Cemetery.
And so it was that on Dec. 20, 60 years after his passing, a minyan gathered at his gravesite to recite psalms, to say Kaddish and to recite a Kel Malei, the memorial prayer.
“We’ve come here together to commemorate, to share and to remember Abraham Mordechai Seidel on his 60th yahrzeit,” said Rabbi Tzvi Fischer of the Portland Kollel, who led the prayers. “We are connected, as are all Jews. No one is anonymous. Every one of us is a part of the soul of our nation, a part of our national community.
“Abraham Mordechai Seidel, Avraham Mordechai ben David, is someone to us. This is a chesed, a kindness to him, and to the family and also to us. We have a connection with him; it is a lasting change for him and for us.”
Mr. Seidel was born on March 3, 1905, in Tomaszów Lubelski, a small town in southeastern Poland. By the eve of World War II, its Jewish population was some 6,000 – about half of the town’s population. Among them were Abraham Seidel, his wife Gittel and their three children – an older son, Yaakov, then about 3 years old, and twin little boys, Israel and Gershon.
The Nazis bombed and invaded in early September 1939, and then the town was briefly occupied by the Red Army before returning to German control. When the Soviets withdrew, they allowed Jews in the city to follow them into Russia. Some 4,500 Jews fled with them, including Abraham’s brother, Lipa, along with their parents, other family members and Abraham’s son, Yaakov.
Gittel and the twins were murdered in the concentration camp of Belzec near Tomaszów. Somehow, Abraham survived.
Yaakov and other family members continued their flight, moving to Bukharia, Tajikistan, Kazakhstan and Siberia. In 1949, those surviving family members, including Yaakov and his uncle, made their way to Israel.
Yaakov died about four years ago, but his son contacted a number of people and groups in the Portland area trying to locate his grandfather’s grave. After the war, Yaakov and his father were able to exchange letters, but never saw each other again.
According to Abraham’s nephew, Hayyim Zeidel of Rishon Lezion, Yaakov served in the Israeli Army and then worked for the Israeli electric company for many years. He and his wife, Gila, lived in Haifa and had a daughter, four sons and more than three dozen grandchildren.
In 2004, Hayyim and Yaakov traveled together to Poland and Tomaszów, and for the past 11 years, Hayyim has been the chairman of the Tomaszów Lubelski Society. “We continue to keep the memory,” he said. (For more information about Tomaszów and the Shoah: https://tomashov.org.il/english/perpetuation.)
There are few details about Abraham Seidel’s life in Portland, or even how he happened to come to Portland. Both his cousin, Hayyim, and his grandson, Mordechai, said Yaakov did not like to speak of the past.
Local newspapers noted that Abraham became an American citizen in 1957, along with other Holocaust survivors who had settled in Portland. On his naturalization petition, he reported that he lived at 621 SW Hall Street, about a block away from what is now Shattuck Hall on the Portland State University Campus. He listed his occupation as custodian. At one point, he had a formal portrait taken at the Gladys Gilbert Studio in downtown Portland and sent it to his son in Israel.
The grandson, who goes by the name Mordechai, said he didn’t believe anyone had visited the grave since the burial. “It is very meaningful for us that, after so many years and many unsuccessful attempts, we have finally located my grandfather’s grave, which is so very far from us,” he said. “Thank you.”
Those helping to make the minyan were also deeply grateful.
“As Rabbi Fischer chanted … and one of us who is still in mourning recited the Kaddish, I think we were all lost in thought,” my husband, Rick Haselton, wrote afterward. “Thinking of Mr. Seidel, Avraham Mordechai ben David, z”l, of what his life, of which we know so little, must have been like. Of being at the end – and for so much of his life – a stranger in a strange land.”
“It was such a privilege to be there,” he added. “May his memory be a blessing.”

Sura Rubenstein, a South Portland native, is a former newspaper reporter and volunteer manager of the Congregation Kesser Israel Cemetery.