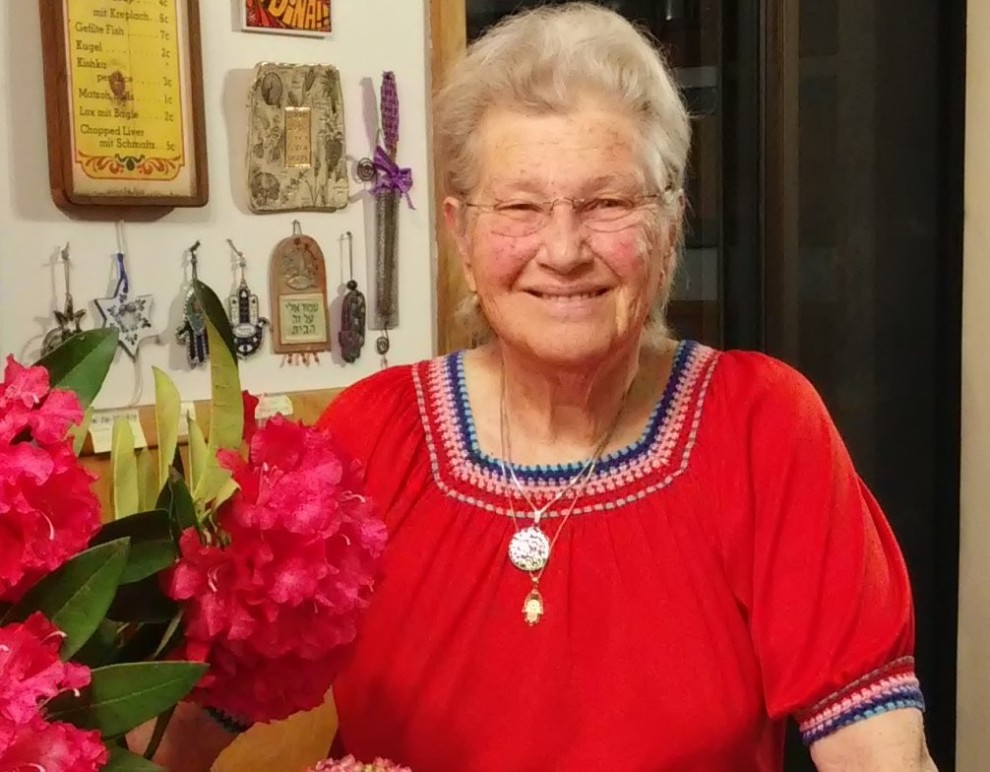 Jathan Janove is an author, columnist, executive coach and organization consultant. During this difficult time, Jathan has been interviewing people about their lives, values and priorities.

On a normal Passover, Dina Feuer’s seders (often over 100 people each night) require 15 pounds of apples just for the charoset. This year she purchased a single apple. The seders were online. As a first generation born American, Dina’s parents came from Europe and spoke Yiddish to her. She answered in English. For the last 46 years she has been in Portland and for 65 years married to her late husband, Yaac. Most of this time she worked full time building community and teaching Hebrew and Judaica at the Portland Jewish Academy, its predecessor Jewish Education Association, and Portland State University. She helped settle the State of Israel, served in the Israeli Army and she even helped found two synagogues.
What’s something in your life for which you are grateful?
I can’t begin to count the number of things I’m grateful for. I have lived a blessed life. If I had to pick one, it would be a chance occurrence that happened in Brooklyn, NY, when I was 11.
On the way to the dentist’s office, I passed a store window with a fascinating diorama featuring camping and scouting. Curious, I stopped. It was the socialist Zionist youth movement called Hashomer Haztier (HH) which had a big emphasis on scouting. This organization set the path for the rest of my life, including my career teaching Hebrew and Judaica, living in Israel (where my three sons were born) and living on a socialist Israeli kibbutz and a moshav, and my passion for the Jewish people and the state of Israel.
As if it were yesterday, I recall playing ping-pong, a game I’d previously known nothing about, at HH. The ping-pong table also served as the place where we kids counted out the money we raised in our blue and white boxes for the Jewish National Fund. This organization gave me a sense of purpose that so many kids lacked.
I remember how scared I initially was to jump through the New York subway doors and talk to total strangers about supporting a country that didn’t yet exist. To this day my closest friends include fellow members of HH.
Socialist kibbutzim have struggled to remain viable. How come?
Unfortunately, as beautiful as the concept is, I don’t think human nature is compatible with the essence of socialism. We’re wired to better ourselves and we tend to assess how well we’re doing in relation to others.
Initially the founding kibbutz community, not the parents, named the children. The focus was truly “from each according to his ability, to each according to his needs.” Today in Israel the only kibbutzim that have retained socialism are ironically the kibbutzim that own lucrative assets, businesses and corporations. I’m afraid the model has not prevailed.
What’s an embarrassing moment in your life you’re willing to share?
When I first came to Portland, Rabbi Stampfer and his wonderful wife, Goldie, hired me to cook for Soloman Schechter, the Jewish camp they founded. (I had been running the kitchens for the HH camp in Liberty, NY, since I was 16 years old.) One morning I overestimated the amount of eggs for French toast and was left with a huge bowl of unused eggs. This triggered my kibbutznik guilt for wasting food.
Imagine that your house catches fire. After saving your loved ones and pets, you have time to safely make a final dash. What would you grab?
This would be a problem. Not being built like Samson, I doubt I could carry the at least 150 photo albums, not to mention the family video collection and my late husband’s artwork. Rather than trying to make a painful selection choice, I’d probably just grab my purse, keys and credit cards.
What’s a treasured memory?
Shabbat is so important that religious Jews are called Shomer Shabbat which means Guardians of Shabbat. Our community centers on coming together for Shabbat and all the other holidays.
My grandson calls our community “The Shabbos Crowd.” We recognized that a form of prayer is appreciating your blessings. So at every Shabbat we go around the table and the children tell the blessings of their week. These are not “highlights” of their week, but rather the things that happened that they are thankful for. It’s an important distinction and makes people appreciate things when they happen and give thanks afterwards. Sometimes the blessings are simple. For example: the car started every day this week; we were healthy; I did well on a school project. Because the kids looked forward to proudly reciting their blessings to a big audience at the Shabbat table, they would collect them during the week and sometimes even bring a written list.
I weaved this practice into my classes. Each Friday, I asked students to share their blessings for the week. For example, if a child said, “I got a present from my parents,” I’d say, “What’s the blessing behind it?” Eventually, he or she would respond with “My parents love and care about me.”
I remember a little boy who often came to class poorly dressed in ill-fitting clothes. One day this boy shared his blessing. He said “my bracha is I got a pair of shoes that fit me.”
What do you find spiritual in life?
Judaism plays a fundamental role in my life and memories are important. We Jews are fortunate to have moral and ethical laws and so many holidays. There’s always a holiday coming up, including relatively newer ones like Jerusalem Day and Independence Day. The month in the Hebrew calendar with no holidays is called “bitter month.”
What’s the moral of the story of your life?
Focus on your blessings and act. You probably don’t have the power to make world peace. But you do have the power to make the world a better place.
As widely as you can (in your own family, friends, neighbors and immediate community), spread positivity, trust, kindness, compassion and caring. If everyone could do that, wow! What a wonderful place this could be.