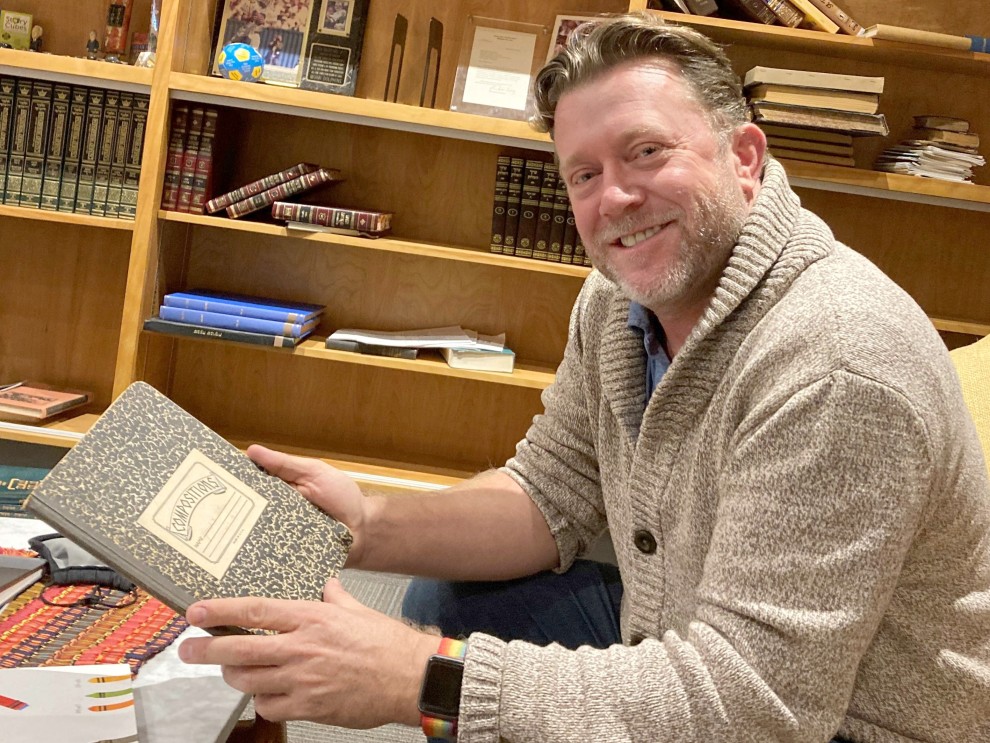 PHOTO: As the 10th rabbi of Congregation Shaarie Torah, Rabbi Gary Oren will balance tradition with innovation. While blending his library with the books of past rabbis, he uncovered this composition book from Rabbi Yonah Geller, z"l, who served CST from 1960 to 2007.

BY DEBORAH MOON
Four months after he assumed the pulpit at Congregation Shaarie Torah, Rabbi Gary Ezra Oren was formally installed as the rabbi of the Conservative congregation on Oct. 30.
It’s been a positive experience on both sides, and the rabbi and congregation are enthused by what the future holds.
“We view Rabbi Oren’s installation as more than the culmination of a very successful search and hiring process,” says Executive Director Jemi Kostiner Mansfield. “It also marks the embarkation onto the next chapter of Shaarie Torah’s story, a story steeped in the goodness of community, tradition and great kindness among all people. We couldn’t be more thrilled to have Rabbi Oren as our shul’s spiritual leader.”
Rabbi Oren concurs. “What I learned during the interview process has been affirmed. This is a community of welcoming and kind folks, who are open to Jewish learning and meaningful prayer experience.”
“People thank me for coming here,” he says, adding he is likewise grateful for the staff and people. Rather than an attitude of “What can you do for me?,” he says people want to know “What are we going to do together?”
Rabbi Oren says he wants to help the congregation “meet the real needs of what Jews need in the 21st century.” He says the congregation, which was founded as an Orthodox shul in 1905, has evolved over the century since then. Now affiliated with the Conservative movement, he says the congregation is framed by tradition but is willing to be creative.
Shaarie Torah Vice President Sara Staggs is especially impressed by the rabbi’s approach to bar and bat mitzvah celebrations. Boys become a bar mitzvah at age 13 and one day and girls become bat mitzvah at 12 years and one day.
“Rabbi Oren understands there are many ways to celebrate that,” says Staggs. “He is bringing that thought into Portland. He is really going to revolutionize the way bar and bat mitzvah is looked at and done in Portland.”
When he worked at a large Los Angeles synagogue, Rabbi Oren says “every family had to fit into a narrow box.” He believes that approach is why some young people walk away from Judaism after the ceremony is over.
“I’d rather create a really meaningful experience for kids and their families,” he says. “I like to sit with the family and ask, ‘How do your story and the Jewish story weave together?’”
“We have to be flexible,” says Rabbi Oren. “We live in society where everything can be curated.  … Some celebrations will look traditional or they may be in a park – there are lots of options.”
While the congregation’s youth learn the skills to become b’nai mitzvah in Shaarie Torah’s religious school, which is led by Dr. Sharon Pollin, Rabbi Oren wants to offer a program for all interested 6th and 7th graders in the local Jewish community.
By the end of the school year, he hopes to launch a monthly program on what it means to become a b’nai mitzvah – “Not the skills, but what does it mean to step into young adulthood?”
The disruption caused by the pandemic and the change demanded by COVID have perhaps accelerated changes.
“I don’t know if there is any going back,” he says. Video at services may be a permanent change. “I can’t imagine a time when we say to a grandparent who can’t travel, ‘sorry, you can’t see your grandson’s bar mitzvah.’”
However, COVID has slowed one change he wants to make. Rabbi Oren wants to set up a “Sacred Grounds” coffee cart outside of the sanctuary. It would serve fair trade coffee and tea in washable cups that people could bring into the sanctuary.
“People are worried about the carpet,” he says. “I worry about people’s hearts. You can replace carpet. We’ll have to get a cleaning service.”
Rabbi Oren has also been impressed with the openness and welcome of Portland’s Jewish community.
“All the Jewish goodwill for Shaarie Torah from lay and professional leaders wishing the place to do well is refreshing,” he says. “It is a legacy institution, but it is more than that. There is a sense of openness and goodness here.”
He points to Rachel’s Well Community Mikvah as another example of the community’s openness. “Portland is a fountain of goodwill. We have a community mikvah where the whole spectrum visits one place. It makes sense, but so many communities are not doing it.”