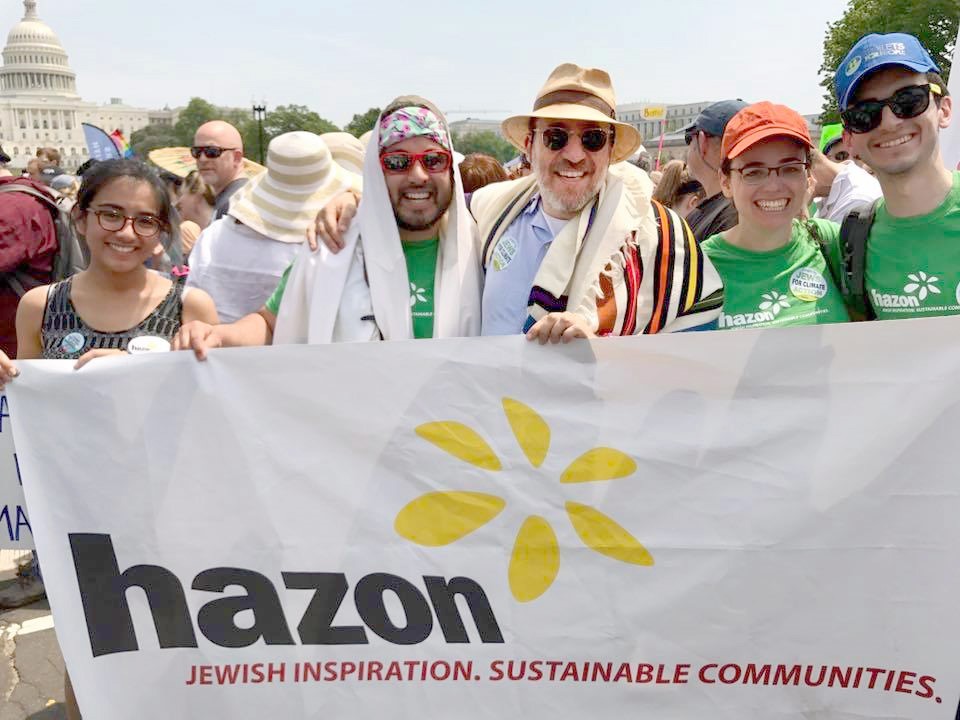 PHOTO: Nigel Savage, in striped tallit, led a Hazon group at a climate march in Washington, D.C., in 2019. He will talk about climate change at the Oct. 27 Solomon’s Legacy program.

BY DEBORAH MOON
Solomon’s Legacy will explore climate change from a legal perspective on Zoom at 11:45 am, Oct. 27.
“Climate Change and the Public Trust” will feature University of Oregon Professor Mary Wood and Nigel Savage, founder of Hazon, the Jewish Lab for Sustainability. Solomon’s Legacy is the Jewish Federation of Greater Portland’s affinity group of local Jewish attorneys, judges and law students.
Wood is a Philip H. Knight Professor of Law and the Faculty Director of the law school’s nationally acclaimed Environmental and Natural Resources Law Center. Savage led Hazon from 2000 to 2021, during which time it became the largest faith-based environmental organization in North America.
Professor Wood will focus on “the role of law and the courts in this climate emergency.” For example, she plans to explore a case filed in 2015 by 21 youth plaintiffs challenging the entire U.S. fossil fuel system in federal district court in Oregon. She also will draw on the legacy of great judicial figures in Oregon who have paved the way for judicial remedies in times of ecological crisis.
Savage stepped down from his post as Hazon CEO to spend the Shmita year in Israel. Commonly translated as the sabbatical year, Shmita is the seventh year of the seven-year agricultural cycle, when the Torah dictates the land of Israel be left fallow and debts be forgiven. Savage says the Shmita is a reminder that “We’re overconsuming our world.”
“It has never been more important for every Jewish community to start to take serious steps to address the climate crisis – and I’ll talk about that in my session,” says Savage. He also plans to share a Talmudic text about the commons (land and natural resources) to lead into a discussion about “the relationship between Jewish tradition and the world around us.”
The Solomon’s Legacy committee, chaired by Marshal Spector, chose to address climate change because, “There is much we can learn from our tradition as to how we can be stewards of our planet … Education and awareness can lead to action.”
“Being a steward is about doing in the present to help ensure a better, healthier future,” says Spector. He adds that Solomon’s Legacy shares “the wisdom of our sages” and information about “what is occurring in the legal arena” in order to “inspire action for us as Jews and lawyers.”
Solomon’s Legacy is named for the late, longtime Oregon U.S. District Court Judge Gus Solomon, the first Jewish federal judge for Oregon, and for the biblical King Solomon, who was renowned as a wise judge. Judge Solomon was well known for welcoming new Jewish lawyers to the community.
The first 10 to 15 minutes of the Oct. 27 Zoom program will give participants the opportunity to gather in small breakout rooms to network before the presentation begins at noon.
Register at jewishportland.org/solomons-legacy-event