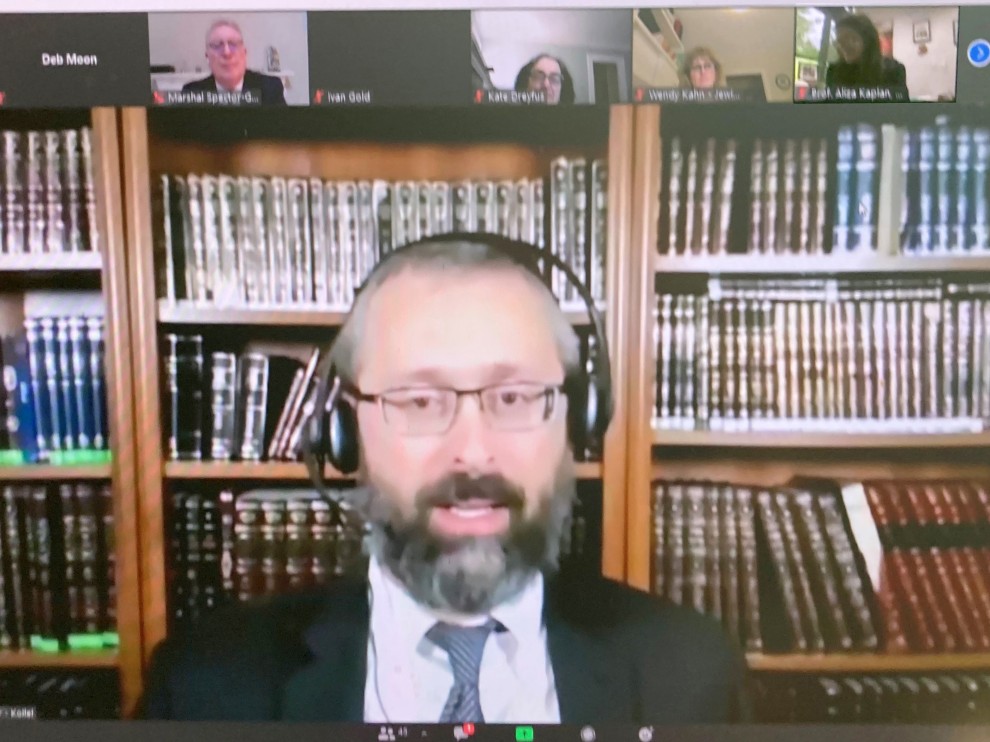 The focus on racial justice, fairness, privilege, humanity and empathy arising in our reality of COVID-19 and protests may be “a chance to … transform the way we think about prisoners and build a less expensive system about genuine justice,” said Professor Aliza Kaplan.
Professor Kaplan, director of Lewis & Clark Law School’s Criminal Justice Reform Clinic, and Rabbi Tzvi Fischer, head of the Portland Kollel, presented “Self-Evident & Sacred Truths: COVID-19, Race & Prisoners,” the first program of the revitalized Solomon’s Legacy. Attorney Marshal Spector chairs the renewed Jewish Federation of Greater Portland affinity group for lawyers, judges and law students. It provides legal and Jewish education and networking opportunities.
The name of the program arose from the change from “sacred” in Thomas Jefferson’s draft to “self-evident” in the final Declaration of Independence, explained Rabbi Fischer.
Professor Kaplan began the Sept. 9 Zoom session with a “Snapshot” of Oregon’s prison system and population. Oregon’s first prison was built in 1850, the second opened in 1985. Now 14 state prisons hold about 14,000 prisoners, 9.1% of whom are Black even though Blacks are only 1.9% of Oregon’s population. Other minorities are also disproportionatly represented in the prison population. Since the 1994 passage of Measure 11 that created mandatory sentences, the number of those incarcerated has more than doubled. The state spends $39,000 simply to house each prisoner per year; that doesn't even  cover mental health or addiction treatment.
“These numbers will stay the same unless we change or policies,” she said.
She considers the current dual crises that have inspired empathy and compassion as an opportunity for us to begin to humanize prisoners. “They are part of us. … not us and them.”
Rabbi Fischer noted that as Jews, “We look at every human being as sacred.” Since the Divine has not form, “What does it mean to be created in an image of God?” he asked. “We mirror the Divine in the potential for good, the ability to create, to do more.”
In the month of Elul when Jews are focused on being written into the book of life, he spoke of being written into the book of history. “Each and very one of us is making a difference in the world, maybe a good difference and sometimes the other way around. … We have all made mistakes, every one of us.”
“Let’s see the potential in every human being and cultivate those,” Rabbi Fischer concluded.
Professor Kaplan said she was especially struck by the idea of people being able to live to their potential. “We need to stop punishing people for the rest of their lives,” she said. “We are not setting them up inside or outside to succeed.”
Rabbi Fischer added, “Not giving someone the opportunity to grow really takes away their humanity. Give prisoners the opportunity to grow.”
For information on Solomon’s Legacy visit jewishportland.org/solomonslegacy.