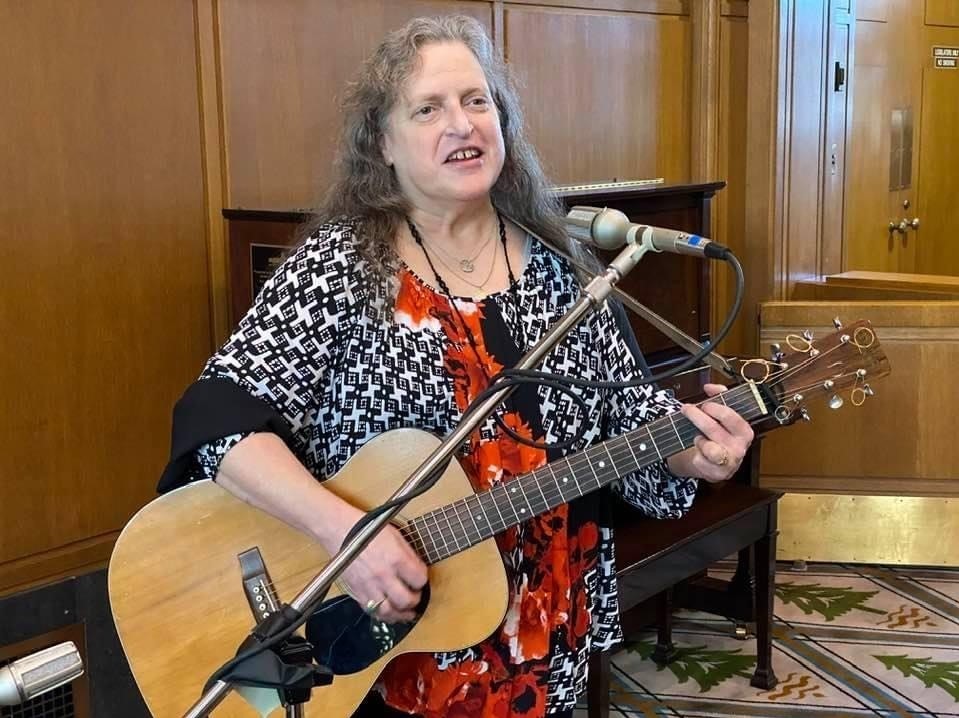 PHOTO: Amy Shapiro sang her updated version of “Oregon, My Oregon” for the Opening Ceremony in the House of Representatives Feb. 14, 2020, Oregon’s 161st birthday.

BY DEBORAH MOON
Thirty years ago, Amy Shapiro blanched when she had to teach her Portland Jewish Academy choir the lyrics “blood of martyrs” and “land of empire builders” when they were invited to sing the state song at the Capitol.
She returned last February to sing the new lyrics she wrote featuring mountains, forests and rivers. This year, House Concurrent Resolution 11 passed the Oregon House in April with a vote of 47-6 and passed 23-5 in the Oregon Senate. As a concurrent legislative resolution, it does not need to be signed by the governor, it just needs to be filed with the Secretary of State.
In testimony submitted for the measure, Amy wrote, “Outdated, misleading and offensive words glorifying oppression and murder are replaced with inspiring words glorifying Oregon’s natural beauty – majestic mountains, forests and rivers – as well as our love of freedom.”
The resolution modifies the lyrics, while keeping the same music of “Oregon, My Oregon” to reflect the “significant cultural, historical, economic and societal evolution in Oregon” since the state song was adopted in 1927. Amy changed fewer than a dozen words in the song.
For instance, she changed “blest by the blood of martyrs” to “blessed by the love of freedom.”
The verse beginning:
“Land of the Empire Builders,
Land of the Golden West;
Conquered and held by free men,”
Became:
“Land of Majestic Mountains
Land of the Great Northwest
Forests and rolling rivers.”
Amy was PJA’s music teacher for about 15 years in the 1980s and 90s. After she taught the choir the lyrics to sing at the Capitol, she didn’t sing the song again until 2016, and that was the first time she updated some lyrics. The Hillsboro Symphony Orchestra, which her husband, Jeffrey Olenick, plays in, asked her to sing the song during a performance featuring Oregon composers. She agreed, but only if she could change the lyrics.
Then Amy contacted her state legislators. An early measure died, but after Representative Sheri Schouten (D-Beaverton) invited her to sing at last year’s opening ceremonies, things started to happen. Rep. Schouten introduced Amy to Evelyn Kocher, who also objected to the song’s racist lyrics. Evelyn started a Facebook page to promote Amy’s version.
Last month, when Amy posted the news that the updated lyrics were adopted, one of the PJA students who had sung the song at the Capitol commented: “I can remember you talking about that when I was in fifth grade, 30 years ago. You have accomplished a long goal. Mazel Tov.”
Amy hopes that students around the state will now sing “Oregon, My Oregon” with pride.