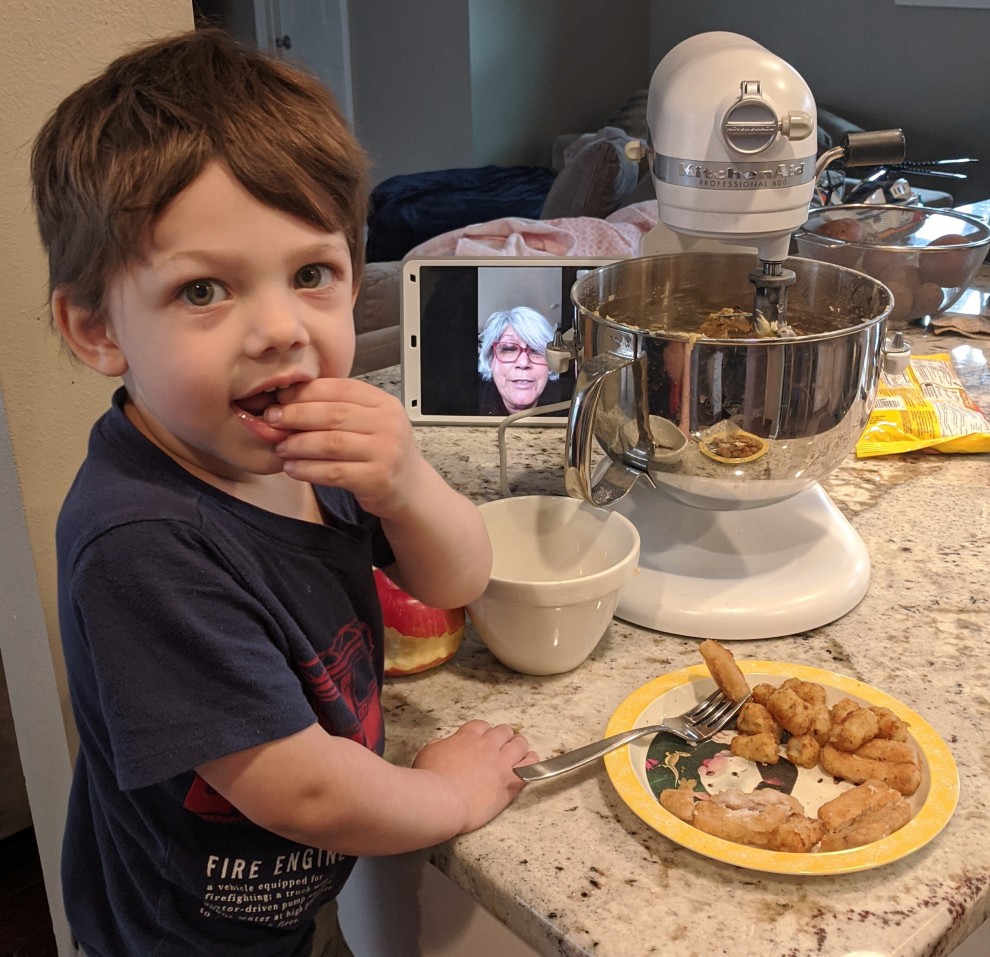 In the new reality imposed by the COVID-19 pandemic, many parents have turned to virtual connection options to keep their children connected with grandparents.
Lindsay von Colditz and her family are ahead of the curve, and they are happy to share what they have learned about using virtual connections. Lindsay says her son, Zev, now 3½, has been Skyping with his father, Nathan, for nearly three years; Nathan travels for work and is often away from home Monday through Thursday. Since both of Lindsay’s parents are gone, she has put a high priority on ensuring Zev connects with Nathan’s parents.
“My son and his grandma talk most days of the week and have for probably six-plus months,” says Lindsay. “I’m grateful we had a culture around virtual connection for our family before the physical distancing started, to help with the social connection.”
Zev’s grandmother, Shelley von Colditz, lives in Astoria, and his grandfather lives in Arizona. Zev now Skypes with both on a regular basis. Lindsay says the whole family follows Zev’s lead on what he wants to do on the calls.
“I have one grandchild close (geographically),” says Shelley. “He has gotten to know me. We have established mutual areas of interest.”
During a visit to Astoria, Zev saw the Astoria ferry “Tourist No. 2,” which was built in 1924 and is now docked at Pier 39 pending restoration. Now he talks to Shelley about the ferry nearly every day, asking why it’s not moving, why they don’t have the money to fix it.
The two read books together and go on “walks” together, with Zev sitting in a stroller and pointing the iPad at things he wants to talk about.
“They often build with MagnaTiles together and talk about what he’s worked on,” says Lindsay. “Zev will sometimes be working on an art project, and she engages with that. She has joined us when we’ve made challah, sometimes when we are prepping a meal since Zev loves to bake and engage in the kitchen. We have found when she becomes a part of whatever he is already doing, the calls are the most successful.”
The family are members of Congregation Neveh Shalom, where Lindsay serves as a co-chair of Shoreshim (young families), Nathan serves on the Finance Committee and Zev is a student at Foundation School.
Recently, Shelley had to tell Zev she would not be able to come to Portland for Passover as they had planned, but that she would join the family seder virtually. “It’s fine for him as long as he can see me and hear me,” says Shelley.
“It’s no different from being there,” says Shelley. “I would do the same things with him if I was there.”
So when the pandemic began, “This was normal for us.”
Lindsay notes the only thing that has changed with the virtual connection is “We have prioritized with grandma and grandpa to do more to support their isolation.” Since Shelley lives alone, Lindsay says “making sure she is engaged daily is important.”
With the “Stay Home, Save Lives order,” Zev needs to be engaged, too.
Shelley suggests grandparents get involved with whatever the child is doing.
“As long as you go along and get involved, it keeps him going,” she says, noting sometimes they will spend 2 or more hours together virtually.
“I highly encourage this anytime, whether there is a pandemic or not,” says Shelley. “It really keeps you connected with your grandkids.”

Tips to connect with Bubbes and Zaydes

• Choose one platform (such as Skype, Zoom, FaceTime, Facebook Messinger or Facebook Messinger Kids). If you have siblings, ask everyone to use the same platform so grandparents only have to learn one technology.
• Learn how to use the chosen platform, so you can help grandparents troubleshoot.
• Use a device that does not have games or TV on it, so your child isn’t tempted to flip to a different activity instead of talking to grandma.
• Let your child lead the interaction.