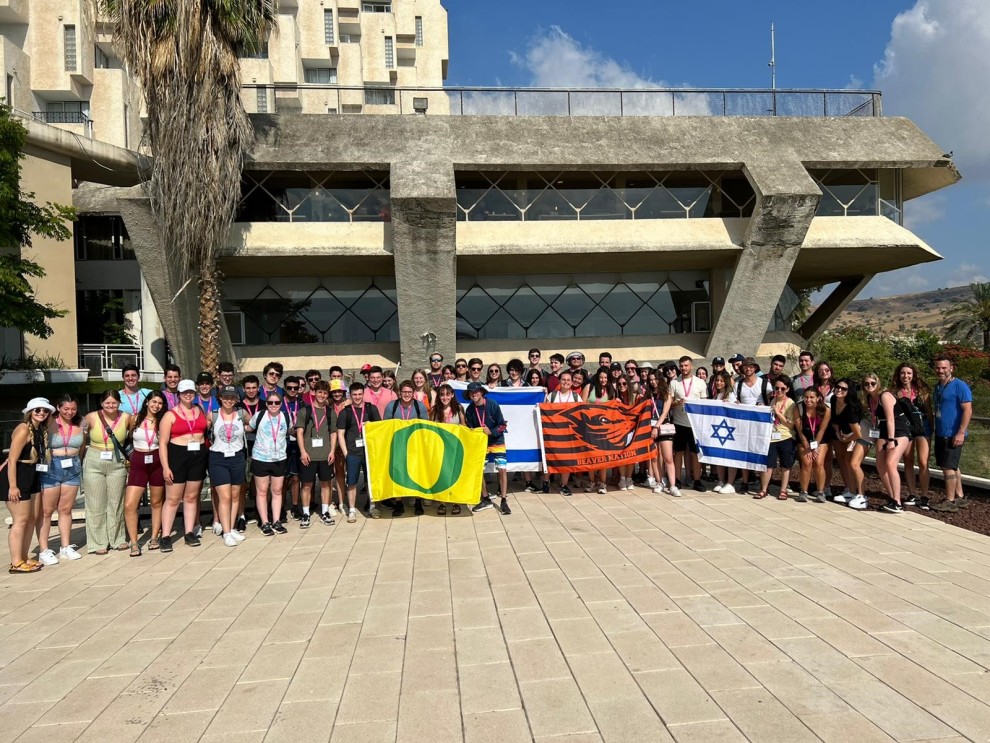 PHOTO: Students from the University of Oregon and Oregon State University show their pride at Tiberias, Israel, while on a Birthright Israel trip with Oregon Hillel.

BY DEBORAH MOON
Following a two-year, Covid-related hiatus of Birthright trips, Oregon Hillel returned to Israel June 19-29 with its largest ever group of students.
“The entire trip was a culturally enriching experience, from having Shabbat in the city of Jerusalem, to touching the Western Wall for the first time, and connecting with IDF soldiers about our similarities and differences from being Jewish and life in Israel and in the States,” says Daniel Moss, a University of Oregon student on his first visit to Israel.
Birthright Israel this year relaunched its free trips to Israel for young Jewish adults from the Diaspora. Since 1999, about 800,000 young adults ages 18-26 from 68 countries have participated in Birthright trips.
Fifty students – 33 from the University of Oregon and 17 from Oregon State University – signed up for this summer’s free 10-day trip. From 2012 to 2019, Oregon Hillel took two groups of students to Israel on the Birthright trips each year; previously the largest trip was 32. This year, two students dropped out the day before departure due to positive Covid tests, but 48 Oregon students were able to enjoy what is often called a life-changing experience.
The Oregon trip was staffed by Oregon Hillel Executive Director Andy Gitelson, Director of Engagement Kaya Rubinstein and two alumni. Gitelson credited Rubenstein with recruiting so many students. Several IDF soldiers on leave joined the trip to give students the chance to form connections with Israelis their own age.
Gitelson says the trip was programmatically similar to pre-Covid trips, but he noticed a change in tempo. Previous trips were heavily programmed from early in the morning till late in the day. “It was a noticeable shift in approach by Birthright to really create more space for wellness … It was nice to have a little bit more air to breathe so to speak.”
It is also essential for students to realize that what is meaningful to one might not be meaningful to others. “You need to create the space for everyone’s experience to be there, and I think that dynamic really played out well,” Gitelson says.
“A memorable experience for me was when we hiked up Masada at 4 am,” says Rebecca Shore of Portland. “Masada was definitely the moment for me. Hiking to the top with all of my new friends and standing at the top and watching the sunrise over the sea was truly a beautiful moment for me and where I felt the most at peace and content. I looked around and saw all these people that I didn’t know existed 10 days ago, and I thought to myself ‘wow, I’m going to miss this.’”
UO student Bradley Buchbinder, who had visited Israel with his high school class when he was a sophomore, also found Masada moving.
“The sunrise hike to Masada on our last day was really memorable for me,” he says. “Also, the visit to the Western wall … was really impactful. … I wasn’t sure if it would have the same impact as the first time, but it was just like I had never been.”
Jerusalem also was a highlight for both Moss and Audrey Minch, an OSU student from Portland.
“Touching the Western Wall was really impactful, and I feel it was the pinnacle so far of my Judaic life,” says Moss.
Both enjoyed the energy and party atmosphere of the Mahane Yehuda Market after Shabbat ended.
“We got there as soon as things were opening back up, and the market was packed with people just hanging out and partying,” says Minch.
Moss adds, “It was really crazy how you could literally feel the energy and the positivity. Everybody was really, really happy and positive and everybody was smiling.”
Returning to the market the next day, Moss was amazed how different it was. “More shops open, more tchotchke items being sold – I bought a hamsa for my grandma.”
Minch, now 21, had been in Israel previously on a NFTY high school trip when she was 17. She says this trip gave her a deeper understanding.
“We were able to talk about the Israeli-Palestine conflict with more maturity than we were able to in high school, and we were also able to understand the different cultures better,” says Minch. “It definitely reconfirmed the thought that we the Jewish people need the state of Israel.”
Also on her second trip, Shore says, “Birthright 100 percent changed my connection to Israel and to my Jewish faith. … Being with so many Jewish students my age and being able to share our experiences growing up Jewish was so meaningful and gave me insight on how much I truly do value my culture and religion.”
Buchbinder agrees. “I do feel a stronger connection to Israel even though it was my second time,” he says. “It kind of solidified that I felt connected to the country. Because both times were such short trips, it made me want to go back again … for a longer period of time.”
The lasting connection extends to the friends the students made, both with each other and the Israelis who joined them.
“Immediately, I felt so connected to the people and staff on my bus; we all became the best of friends, and I will always hold them close throughout the years, especially since we shared so many special memories and experiences together,” says Shore.
Minch echoes that sentiment: “I didn’t expect how close everyone on my bus would get and just how many memories (we) would make together. … There were six Israeli soldiers on our bus, and I’m still in contact with a lot of them. We have a Snapchat group.”
Oregon Hillel’s next Birthright trip will be Dec. 18-29. Sign up at freeisraeltrip.org/oregon. For more information, contact kaya@oregonhillel.org.
For more information on Birthright, visit birthrightisrael.com.