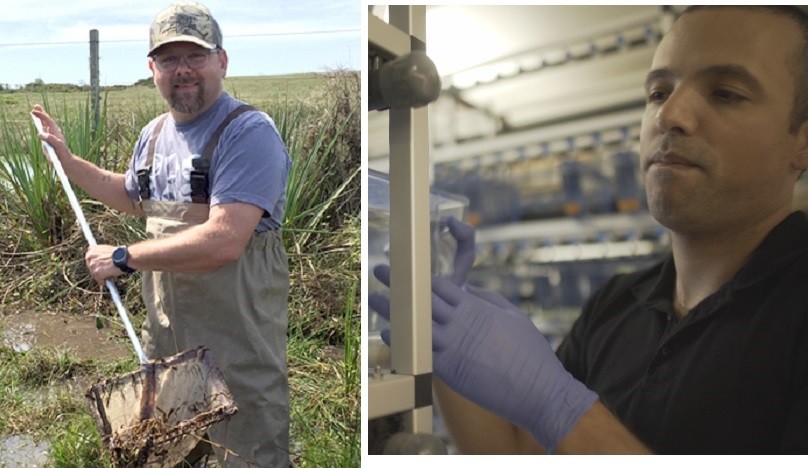 Portland and Israeli researchers have joined forces for a study of embryo dormancy and aging in killifish that could have applications in the fields of human aging and spread of cancer.
Portland State University Professor of Biology Jason Podrabsky, Ph.D., and Hebrew University Assistant Professor of Genetics Itamar Harel, Ph.D., were awarded a National Science Foundation grant last year to study the role of vitamin D synthesis and signaling on embryo development/dormancy and aging. The researchers are studying annual killifish, which have short life spans and whose embryos can become dormant in dry conditions.
“We are asking basic science questions,” says Dr. Harel from his lab The Silberman Institute at Hebrew University. “However, our findings could identify principles in embryonic development or aging that are conserved throughout the animal kingdom (including humans). It that case, our research could be applied for manipulating similar biological processes in humans, as well.”
Both researchers study annual killifish that live in seasonal ponds. When the ponds dry up, the adult fish die, but the embryos survive in the dry mud. They can survive without water for years.
“They can stop their development and remain dormant as embryos for years – this is what I study,” says Dr. Podrabsky. “Second, they are one of the fastest-aging vertebrate species on Earth – some species go through the entire process of growing old and aging in a handful of weeks – this is what Itamar studies. We are combining forces to study both processes.”
Harel lived in the United States for five years while doing his postdoc research at Stanford. He has been studying aging in killifish in Africa. The two researchers had been following each other’s work, and Harel reached out to Podrabsky to initiate the collaboration.
“Jason is a pioneer in diapause research and was a natural collaborator for this project,” says Harel.
As Podrabsky explains on pdx.edu/podrabsky-lab/what-is-a-killifish, “Diapausing embryos experience a profound arrest of cellular metabolism, growth and proliferation. Understanding how these feats are accomplished could help to understand how to slow or arrest development of human cancers.”
Vitamin D controls whether the embryos of these fish enter into dormancy during development. The researchers use modern genome editing techniques (CRISPR/Cas9) to knock out the function of genes that produce vitamin D to see if it affects the fish’s ability to enter dormancy or changes the speed of aging.
“Once we learned more about the mechanisms that regulate diapauses, it became clear that these same mechanisms also affect aging, so it is a very complementary collaboration,” says Podrabsky.
“Because vitamin D signaling is conserved between fish and humans, this project could help us to better understand aging in humans, and could help us to develop technologies to make human tissues (and maybe even whole humans) dormant,” Podrabsky adds.
COVID has significantly impacted the researchers’ ability to do field work and to establish and strengthen the collaborative project between the scientists and their labs.
“We would normally travel to South America and/or Africa each year to collect embryos and fish from the field, but all travel has been paused,” says Podrabsky. “There is also a significant amount of money in the grant to pay for student exchanges (two-three months at a time) between my lab and Itamar’s lab to foster cross training. I am hopeful that these trips will be possible as early as late this year or early in 2022.”
The study is due to run until about fall 2024.
Podrabsky also serves as interim vice president, research & graduate studies at PSU. In that role, he oversees PSU’s visiting scholar program to bring an Israeli scholar to campus for a yearlong visiting professor appointment in a PSU department related to their area of study. The program was created as part of the Harold & Arlene Schnitzer Family Fund of the Oregon Jewish Community Foundation’s 2018 donation to PSU’s Judaic Studies Program.
“It is just a coincidence that I also have a collaboration with Itamar,” Podrabsky says. “I really enjoy working with the folks associated with the visiting scholar program, and it is a great opportunity for international collaboration.”
In 2019, Professor Stanley Rotman was the first visiting scholar. Rotman did research with Professor John Lipor of the electrical and computer engineering department, presented multiple seminars and mentored graduate students.
“Basically, we’re pausing the program due to COVID and until we can safely host Assaf Shmerling, our second scholar,” says Podrabsky.