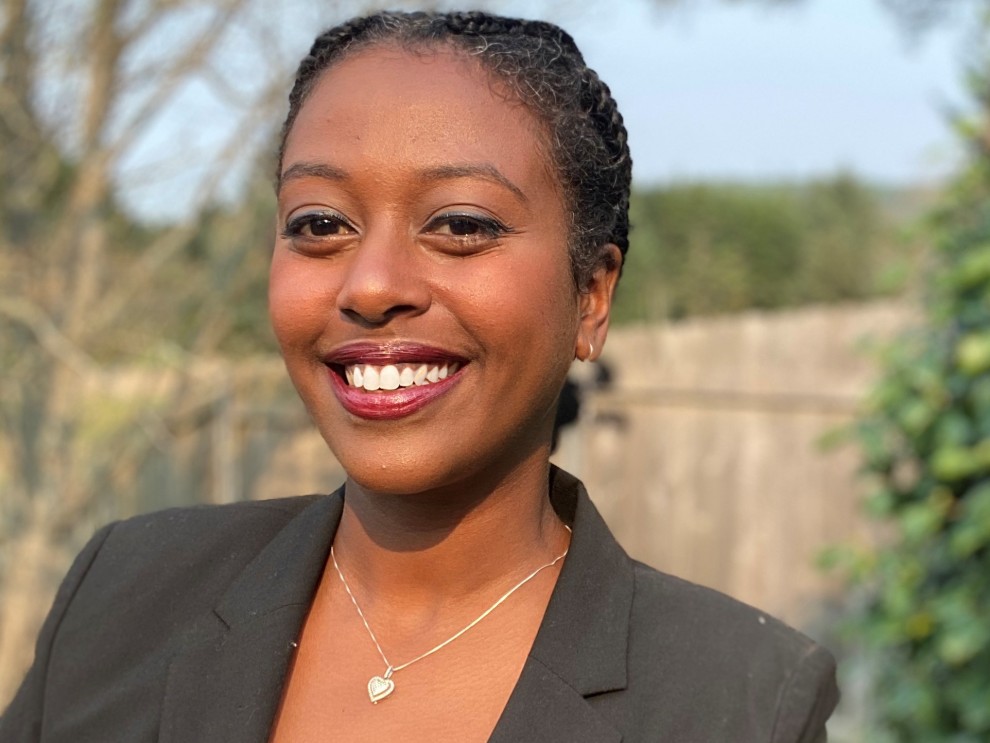 BY DEBORAH MOON
TischPDX has received a grant from The Jews of Color Initiative to host a Sigd celebratory and educational event in Portland, led by a member of the TischPDX cohort (see box below). Sigd is an ancient Ethiopian Jewish holiday observed 50 days after Yom Kippur.
“Oftentimes, in Jewish settings, I find myself having to correct people with: ‘Not all Jews do that’ when it comes to conversations around holiday customs and rituals,” says Metasabiya Habteyes, the event creator. “I want my community to look beyond Ashkenazi norms and experience the greater tapestry of our Jewish existence and be confident.”
Metasabiya (Mee-taa-saa-biya) “Meti” was born in Israel. Her mother made Aliyah from Addis Ababa, Ethiopia, to Israel in 1988 and met Meti’s father in ulpan, a Hebrew learning center for new olim (immigrants). Her paternal grandfather was arrested by the Ethiopian government for covertly working with Israel to liberate Ethiopian Jews; he spent several months as a political prisoner until American Jewish organizations took up his cause. Meti moved to Portland about five years ago and says she loves the community she found here.
Co-founder Eleyna Fugman says TischPDX appeals to young people who want to learn more about their Judaism but do not feel comfortable in more formal organizations. Eleyna founded the group with fellow east side Portlanders Rabbi Ariel Stone and Kalyn Culler Cohen.The group’s third cohort, which includes Meti, will graduate in December.
“TischPDX is thrilled to be able to work toward our mission of bolstering the leadership of young and marginalized Jews in Portland through facilitating connections and collaborations like this one with our fellow Metasabiya Habteyes and the Jews of Color Initiative,” says Eleyna.
Meti says that Sigd is about coming together as a community for a “communal reflection” and “bonding over the dream to one day be in Jerusalem. For Ethiopian Israelis, it’s more of a celebration of having the dream of our ancestors realized.”
Meti didn’t participate in a Sigd event until she was serving in the Israel Defense Forces.
“I was a military journalist and was sent out on an assignment to cover one of the first IDF Sigd celebrations in Jerusalem,” she says. “During my army service, there were only two other Ethiopians in my whole unit, so I was shocked to see so many other Ethiopian soldiers and even high-ranking officers serve in the IDF. I felt like I was on an island for so long, but here we were all together, celebrating together and more than that, we were being celebrated for the first time in my life. I was holding back tears of joy and pride throughout the whole event. I was soaking up everyone’s stories, and I’ve celebrated Sigd every year since then.”
Meti says leaders of the older generations, who are more familiar with Sigd, are passing on the tradition in innovative ways that speak to a larger audience and younger Ethiopian generations.
She points to the popularity of Sigdiada, an Ethiopian art festival that launched in 2012 in Tel Aviv.
“I think that our generation (of Ethiopian-
Israelis) and the ones coming after us should add new customs to our existing traditions around this holiday like tikkun olam and direct social impact,” says Meti.
For her Nov. 3 program, Meti plans to share a slide show about Sigd, how it’s celebrated and some of her personal connections to the holiday. The evening will continue with dancing, an art project for kids and food (with to-go containers available for those who don’t feel comfortable eating together).
In Portland, Meti has continued the journalism career she began in the IDF. She is the director of public affairs at KBOO Community Radio. She also co-hosts “The Gap,” a talk show on KBOO, where she and Althea Billings amplify local action, activists and organizations. In December, she will launch a podcast about organizing through a Jewish lens, combating anti-Semitism with interviews from political and grassroots leaders. It will also be a space to have nuanced and respectful conversations about Israel/Palestine.