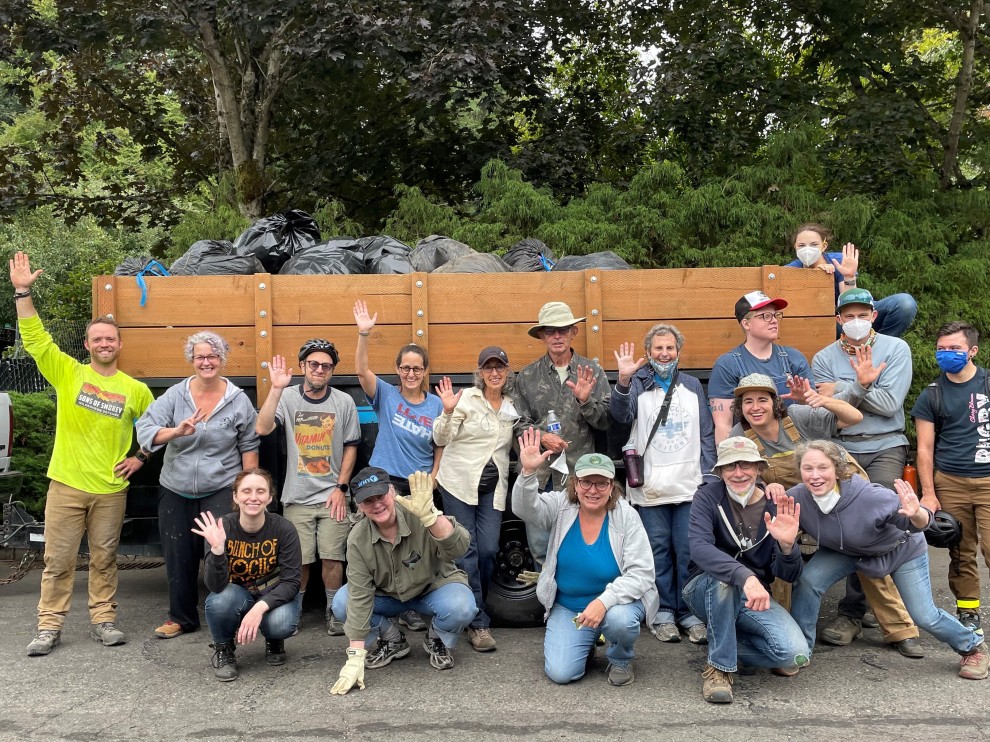 Congregation Shir Tikvah collected the most trash of all the communities in 30 states and 18 countries that signed up to participate in this year’s environmentally conscious Reverse Tashlich sponsored by Tikkun HaYam, repairthesea.org.
More than 2,000 people in 170 Jewish communities around the world reversed the tradition of tashlich, in which breadcrumbs or pebbles are cast into flowing water to symbolically cast off the sins of the previous year. In this ceremony, people remove human “sins” (marine debris) from the water in a collaborative waterfront cleanup.
The annual project, held the Sunday between Rosh Hashanah and Yom Kippur, had a 240% increase over last year.
Shir Tikvah’s crew, organized by Robbie Lambert, cleared 2,360 pounds of trash from the Johnson Creek Floodplain near the Springwater Corridor. The cleanup project went beyond trash pickup, though, and forged connections between the congregation and the homeless campers in the area.
“I am such a water person – put me around water, and I’m a happy person,” says Robbie, who lives on a floating home on Sauvie Island. “I didn’t realize we would get involved in houseless issues.”
When Robbie volunteered to lead Shir Tikvah’s Reverse Tashlich team, she envisioned cleaning up the beaches on Sauvie Island. But when she learned the nonprofit SOLVE had scheduled a beach cleanup there a day earlier, she contacted SOLVE and asked them for other ideas.
SOLVE suggested four sites along Johnson Creek; when Robbie scouted them, she found one that was in serious need of cleanup. Robbie spoke to the residents of the nearby homeless encampment on the Johnson Creek Floodplain, and they were delighted with her request to haul away the trash. She says that when the camp sets out garbage hoping it will be picked up, more often passersby dump more trash.
On cleanup day, “We chatted and played with their dogs. We got to know the people.”
“We have to meet people – then they become a person,” adds Robbie, a retiree who used to volunteer as a GED tutor working with homeless youth at Outside In.
The group was able to haul away more than a ton of garbage thanks to another connection Robbie made. FindingPDX.com, run by volunteers Chris Bean and Dave Kephart, brought their trailer to haul away everything Shir Tikvah collected.
After winning $500 for their efforts, Shir Tikvah is planning to donate to FindingPDX to help with future cleanups. Robbie is working with Chris to schedule future cleanups for the Shir Tivkah crew.
Shir Tikvah alsoparticipated in a collection drive to gather supplies for the houseless. Shir Tivkah member Sonia Marie Leikam and Abbie Schwalb, both part of the Free Hot Soup network, invited people to drop clean supplies useful for camping at Leikam Brewing on Oct. 23.
Robbie is delighted to have both cleanup and aid for the houseless as part of her congregation’s repertoire.
You can see more in a video spotlight from Tikkun HaYam at youtube.com/watch?v=i3AoR0yqPXM.