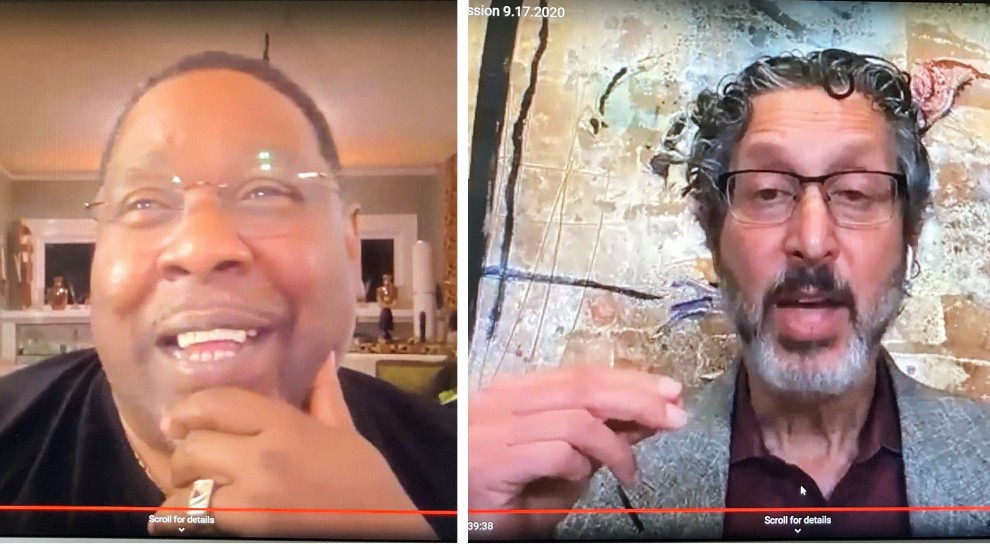 When United in Spirit launched early this year, the Jewish and Black organizers could not have known how essential and relevant the programming would be – nor how difficult it would be to present.
COVID forced the postponement or the move to a virtual landscape of the programs just as social justice issues and protests against police brutality against Black people ignited the desire to rediscover the civil rights collaboration between the Black and Jewish communities.
In mid-September, about 570 members of both communities explored their “Shared Legacies.” Participants could screen the documentary “Shared Legacies: The African American-Jewish Civil Rights Alliance” at their leisure Sept. 13-15 and then join a Sept. 16 panel discussion featuring the film’s producer Dr. Shari Rogers and the Rev. Dr. Gerald Durley, a veteran of the Civil Rights movement who appeared in the film, and Portlanders Rabbi Michael Cahana and NAACP President E.D. Mondaine. The discussion was moderated by Judy Margles and Bob Horenstein.
“These are exciting times,” said Dr. Rogers. “The world cares about this (racial injustice) right now, and we have the opportunity to use this for good.”
Rabbi Cahana agreed. “White supremacy is dying. It is going to be loud in its dying. … Hatred cannot stand up to friendship.”
The partnership chronicled in the film was based on the shared legacy of oppression that Blacks experienced through slavery, segregation and racism and Jews experienced from the expulsion from Israel 2,000 years ago culminating in the Holocaust.
Rabbi Cahana said that with the Holocaust only a couple decades earlier, that shared history of oppression served as a strong basis for the partnership in the Civil Rights era. Yet as Jews as a group (the Rabbi emphasized not all Jews are white) were accepted into white society, that foundation eroded.
He said the basis of Jewish support of the Black community must now be “based on compassion, understanding, on seeing the world through another person’s eyes. It comes through personal encounters.”
Bob Horenstein added that the “basis for our community’s continuing this important work” rests in the Jewish teaching “Justice, Justice you shall pursue.”
Pastor Mondaine said his community is a powerful, resilient people. “However, we need the wind beneath our wings. We can’t just do this by ourselves. We need the help of those with access and prestige.”
Just 10 days before the far-right Proud Boys were scheduled to hold yet another rally in Portland, Pastor Mondaine recalled a previous visit by the group. He said Portland Rabbi Debra Kolodny invited the NAACP to join her congregation for a Shabbat picnic next to the protests.
“We talked about unity, and they talked about division,” said the pastor. “We have to be unapologetic and extremely deliberate in how we stand together.”
Rabbi Cahana noted, “People try to divide us, but you can’t divide brothers, you can’t divide sisters.”
United in Spirit was scheduled to conclude in October with a joint mission to Civil Rights sites in the American South. The pandemic forced its postponement until next October. After the Shared Legacies program, interest in participation has surged. So perhaps next fall’s Civil Rights mission will be not just a figurative, but also a literal return to the unity the two communities enjoyed half a century ago.

Sponsored by: The Jewish Community Relations Council of JFGP, Portland Chapter of the NAACP, Oregon Jewish Museum and Center for Holocaust Education, and Dialogues Unlimited