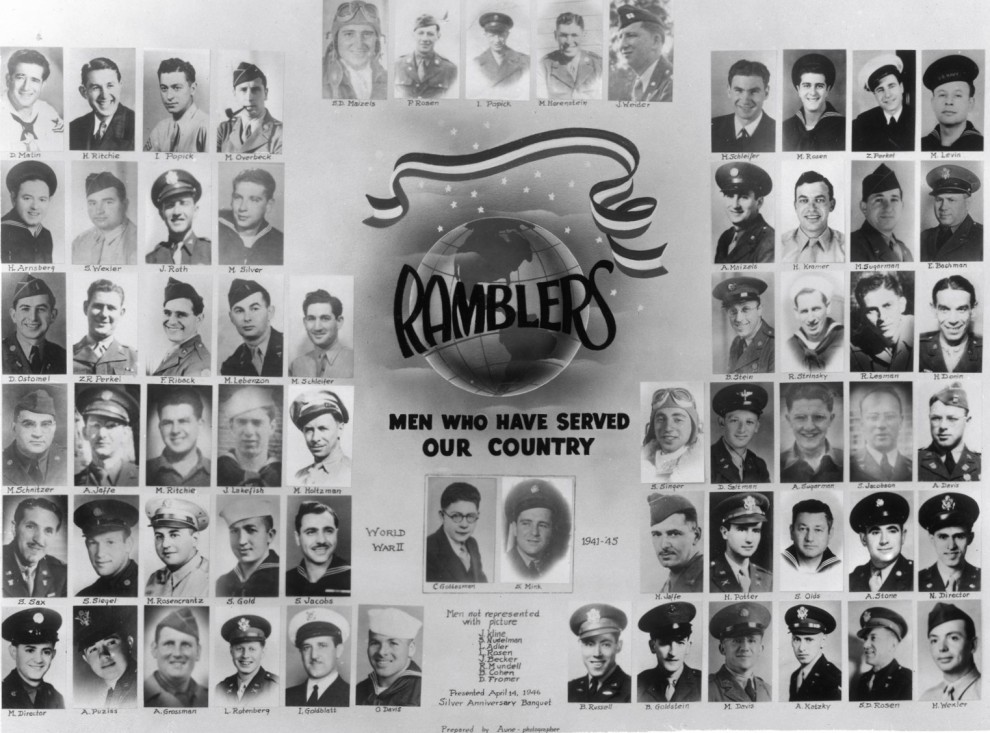 From Colonial time to the present, Jews have been a continual and dependable presence in the defense of the United States of America. In 1654, Asher Levy, one of the original 23 Jewish settlers in New Amsterdam, demanded and secured for himself and fellow Jews the right to stand guard at the stockade.
This Veterans Day we reflect on the participation of Oregon Jews who served in the United States armed forces and share stories from the archives of the Oregon Jewish Museum and Center for Holocaust Education. 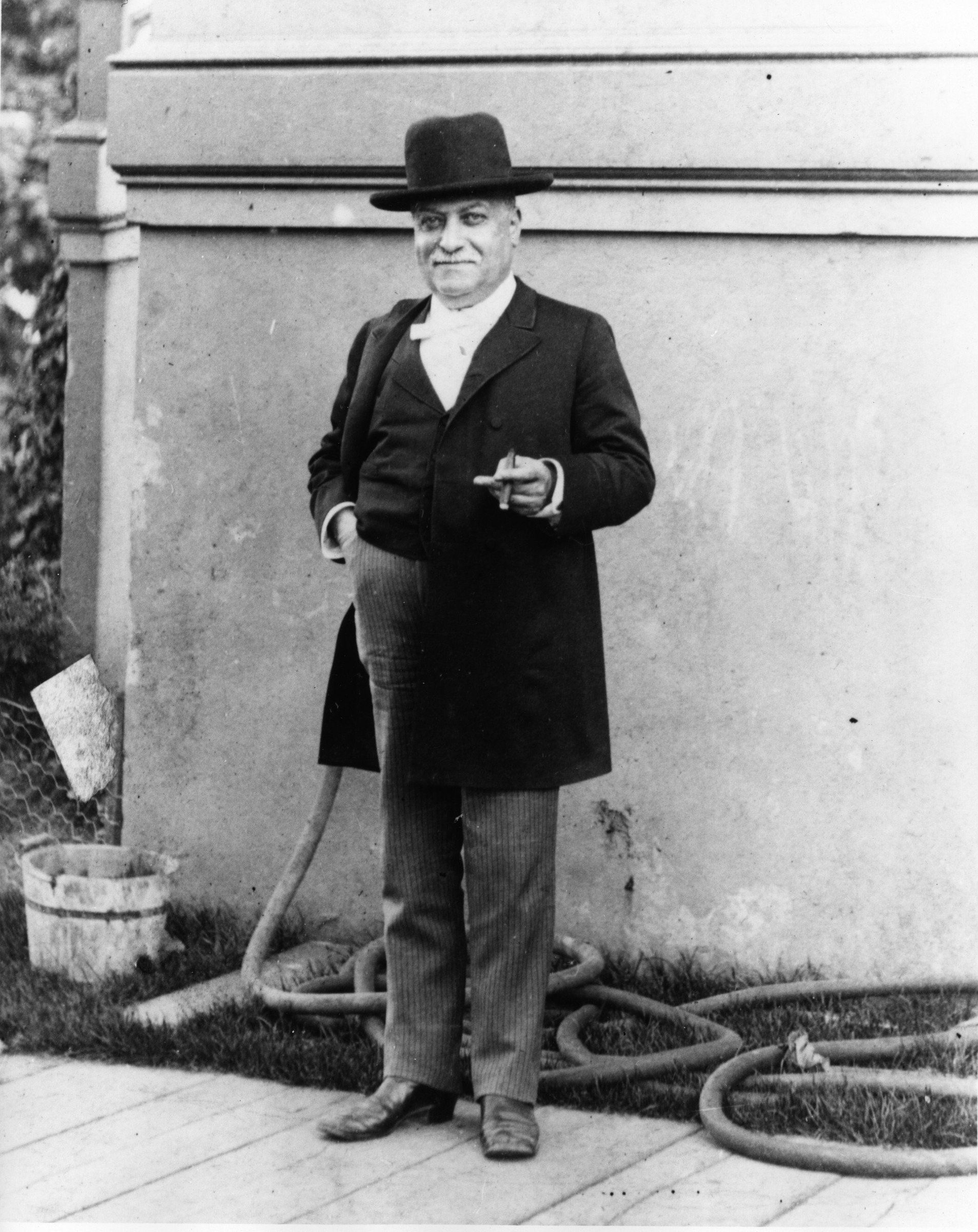 INDIAN WARS
Bernard Goldsmith, a German émigré who became Portland’s first Jewish mayor in 1869, was among a number of Jews who fought in the Indian Wars in Southern Oregon and Northern California in 1855 and 1856 – service considered a civic duty during the early days of settlement.

ON THE FRONT LINES
Between Dec. 16, 1944, and Jan. 28, 1945, a number of local Jewish servicemen fought in the Battle of the Bulge, the largest and most devastating conflict in the European Theater during the Second World War. For six long weeks, with temperatures below zero and snowdrifts waist high, American forces fought successfully to push back elite Nazi forces on the German/Belgian border. 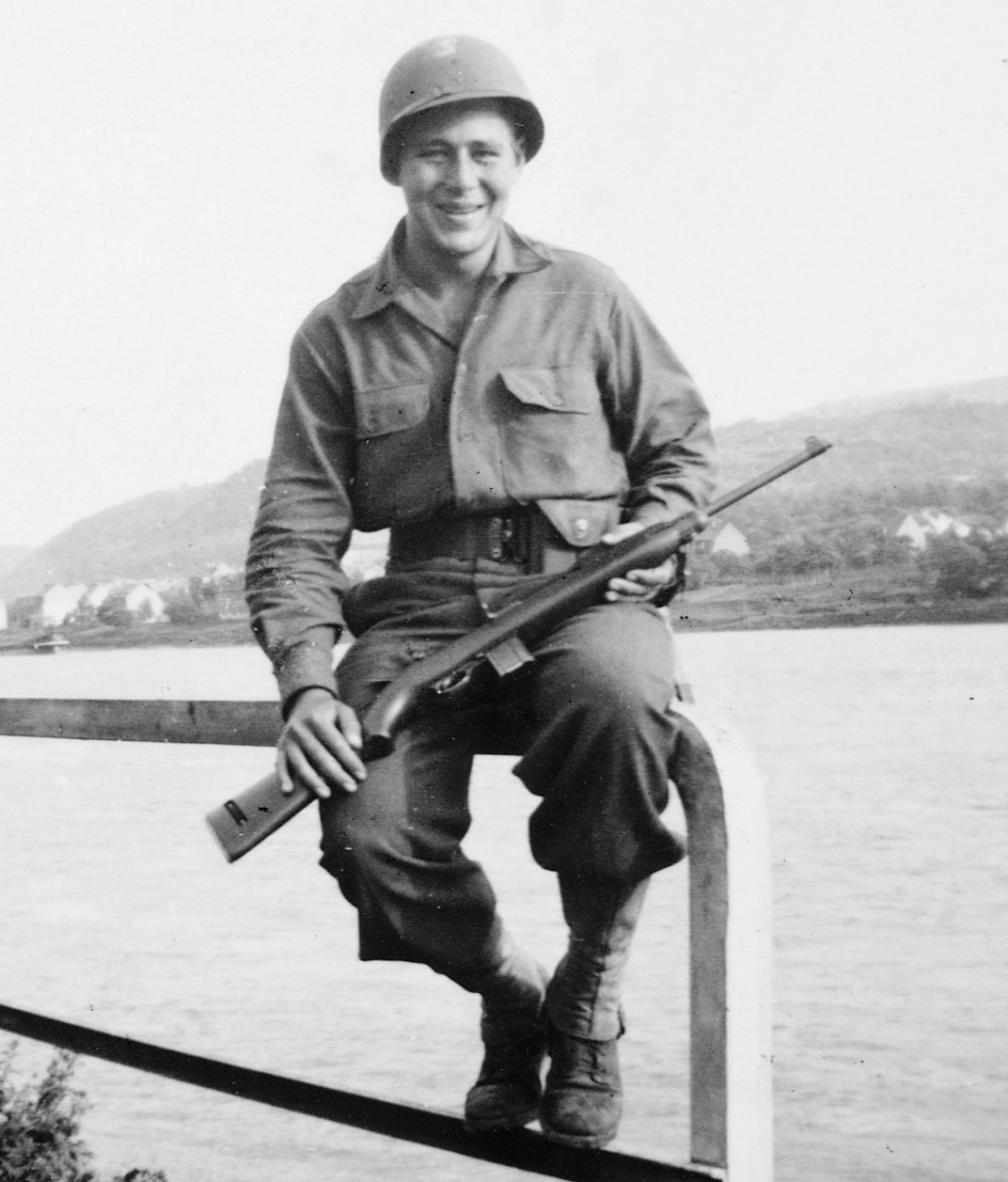 Machine gunner Paul Meyer took part in Operation Nordwind, the southern part of the battle. Injured by German 88 mm. shell fragments on a snow-covered hill, he was carried out on a stretcher and eventually taken to a hospital in England.
LETTERS HOME
Letters in the museum archives describe extremely adverse conditions, revealing loneliness but also wit and humor. On June 25, 1944, Arthur (Curly) Grossman wrote from “somewhere in the Pacific”:
“My heart really goes out to you, when I think of you having to ride to work in those stuffy crowded busses, or having to worry about gas coupons, shoe stamps, income tax, war bond drives, and going home and sleeping with your wife, especially when she has cold feet. All this hurts me, when I think of all the advantages I have, free eats, free clothing, 2 pairs of shoes, 18 toilets, no bills, no taxes, travelling expenses on the government, insurance paid for, money to my family, free doctors, and many other advantages. I used to work inside fifty weeks to get two weeks outside; now I work fifty weeks out, to get two weeks in.”
Ben Stein wrote from Italy on Nov. 1, 1944:
“Well, I’m fine although quite homesick. Rain and mud up to here. I got a letter from Jack Bader; he’s in France and doing OK. My cousin Bernard Ruvel was wounded over here in Italy and was in Portland on a furlough. I have a hunch that my kid brother, Irv, is possibly slated for overseas soon. I’m listening to Mildred Baily over the air. Gee, the way she sings makes me feel like I’m sitting at home. Please write soon.”
Harry Potter was stationed in Hawaii when his oldest daughter was born. On Aug. 2, 1944, he wrote:
“My wife and I are now the very proud parents of a new baby girl, Susan Willie. I’m sorry I can’t let you in on the details – I haven’t heard them myself yet ... I got that news on July 22; if you note the date on this letter, you’ll see why my morale is a bit low now.” The first time Harry saw his daughter was 17 months after her birth.
From New Guinea, Sy Wexler acknowledges that army life isn’t as exciting as he imagined:
“Just a line to let you know that I’m still alive, although of late, I’ve been wondering if such is really the case. I thought that by now I’d have something interesting to offer you, but I’m sure you wouldn’t want to be bored to death with the monotony of this life. For a while I had a sweet job sitting on my rear and acting as librarian. Then I had a nice setup sealing envelopes for a couple of hours each day … now I’m back to where I started, digging bigger and better wells than ever before. May get to dig some latrines yet. I finally met a Rambler in the person of Stan Nudelman. The historic event occurred at a Rosh Hashanah service. He’s lost a lot of weight, but is much better for it and he looks like a 16 year old.”
It took us some digging. but the clue to Stan Nudelman’s weight loss comes out in his letter a few weeks later:
“Here it is another Thanksgiving Day and even tho’ we are 'Somewhere in New Guinea' we had the real turkey with all the trimmings. The army really tries to give GI Joe his holiday dinners. All in all, it was swell, but it didn’t take the place of my wife’s cooking.” 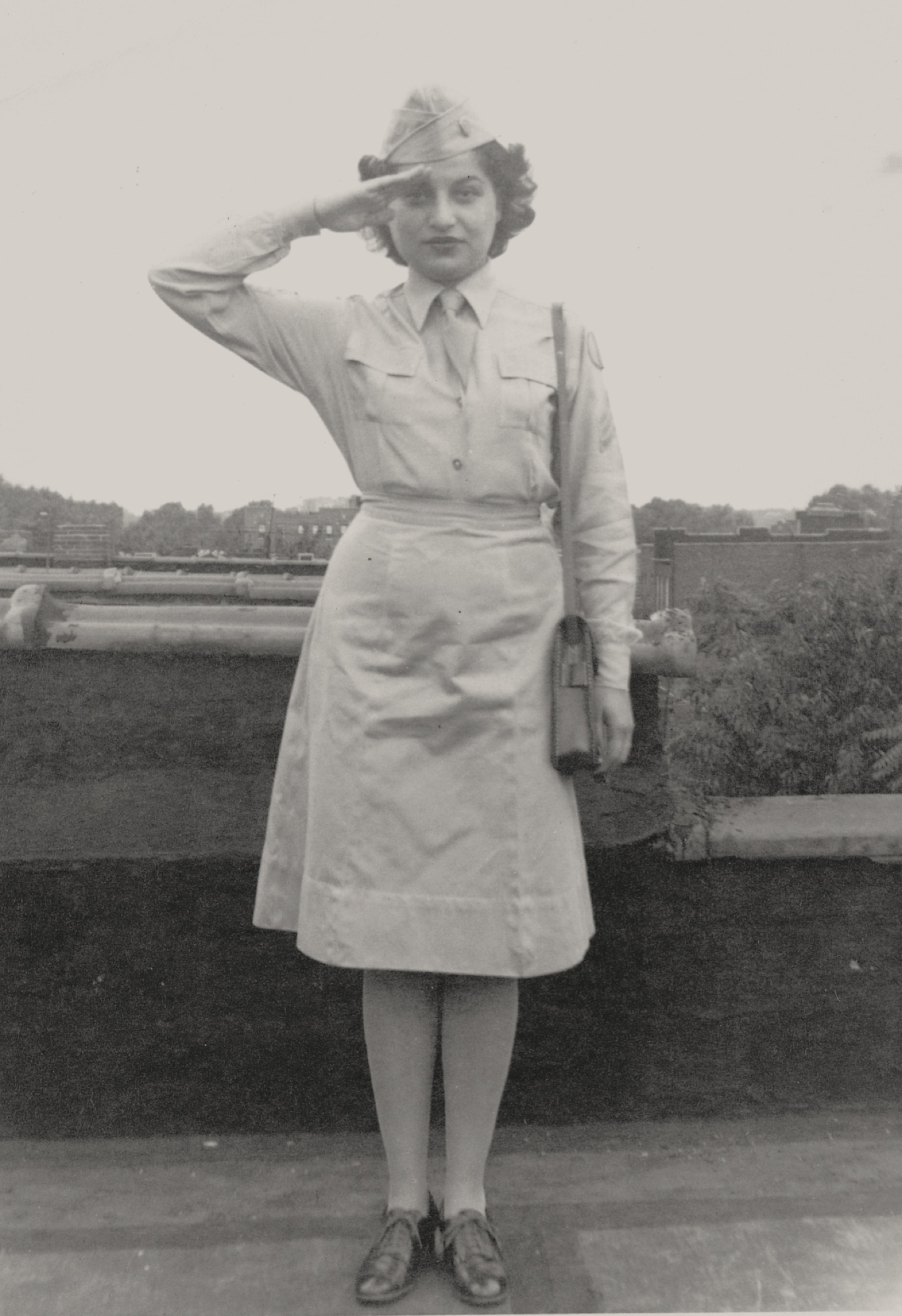 Both officially and unofficially, women have served in the American military since the American Revolution 244 years ago. In the Revolutionary War and Civil War, women often fought disguised as men. The Navy, the Marines and the Coast Guard finally accepted women during the First World War while the Army only admitted women to serve in the Nurses Corps. Several thousand women also served as drivers, secretaries, clerks and telephone operators, but they worked under civilian contract and were not officially in the Army.
When the Second World War broke out, women were desperately needed by the Army to fill important administrative jobs in order to release men for combat. All branches of the armed forces conducted massive publicity campaigns urging women to volunteer. In addition, the Army and Navy Nurse Corps heavily recruited civilians to meet their own expanding needs.
Scant information exists about Oregon Jewish women who served before the Second World War, but we can well imagine that women worked on behalf of the war effort in whatever ways they could. Buck Sergeant Esther Schneberg stands among the first group of women to serve in the Second World War. Although many servicemen recall receiving home hospitality for Shabbat and holiday dinners, Schneberg, a WAAC stationed in Fort Benning, Ga., recalls that she never met any of the Jewish families in town. “The Jewish men were invited to their homes, but never the Jewish women. Apparently there was a lack of Jewish men for their daughters.” 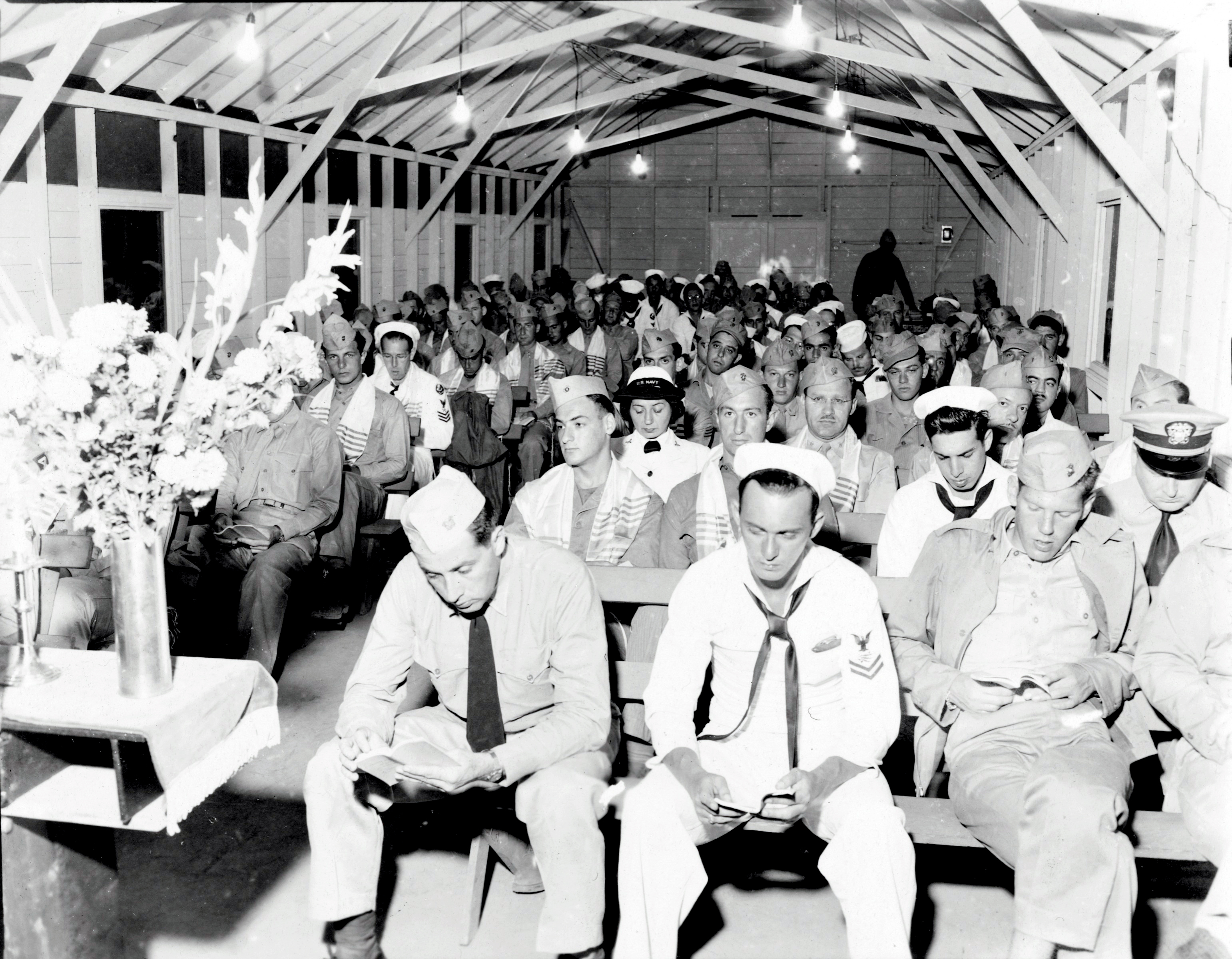 KEEPING THE FAITH
Serving in the military and observing a Jewish life – keeping kosher, attending Shabbat services, celebrating Jewish holidays – was not always possible. Nonetheless, many Jewish military personnel held onto their faith as best they could.

Members of Oregon’s Jewish community have continued to serve around the globe since the Second World War in similarly routine day-to-day operations interspersed with heroic moments.

Judy Margles is the director of the Oregon Jewish Museum and Center for Holocaust Education. ojmche.org

(ALL PHOTOS COURTESY OF THE OJMCHE)