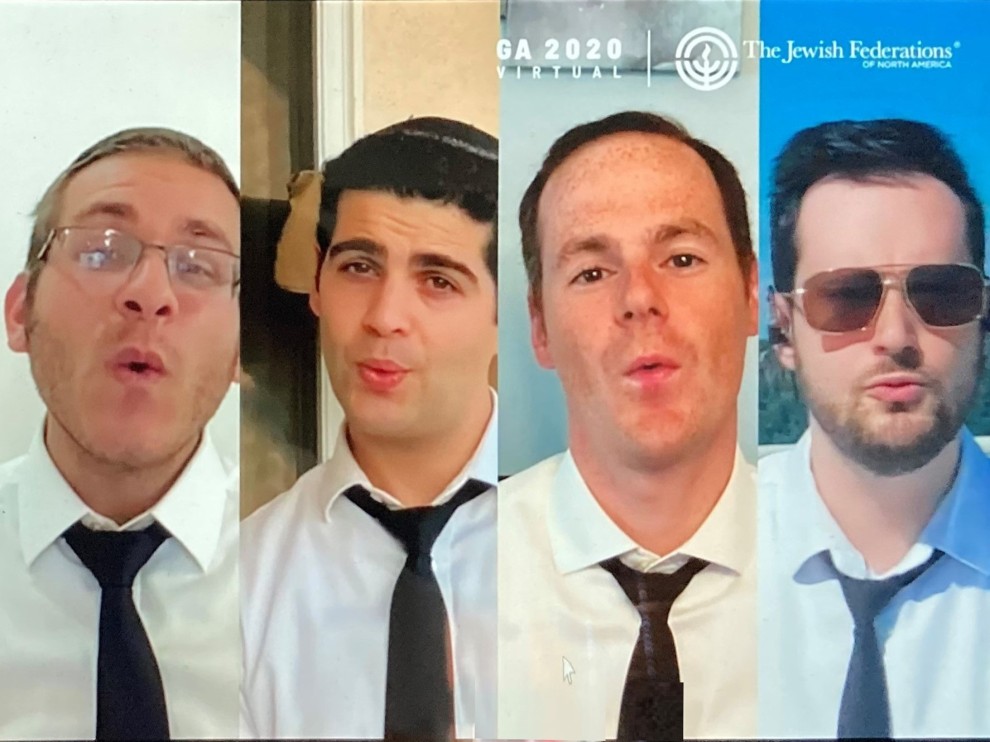 PHOTO: The Maccabeats opened the Jewish Federations of North America’s first-ever virtual General Assembly with a musical medley. Since this year’s GA theme was “Come Together,” the Maccabeats contribution included the Beatles song of that name mashed up with a Beatles-inspired Israeli classic, “Lu Yehi.”

This year’s Jewish Federations of North America General Assembly drew more than 10,000 participants, including about 60 from the Portland area, for the virtual conference Oct. 25-27.

The three-day experience was filled with workshops, artistic performances, thoughtful conversations, FedLab and two special plenaries: Jewish Together and Federation Together.
All 146 federations came together to recognize the collective work of the federation system over the past year and inspire participants for the important and challenging days that lie ahead.
In addition to the federation professionals and lay leaders who usually attend GAs, this year’s free virtual event drew professionals from other Jewish organizations and many more community members than ever before, as one could drop in on sessions/topics of interest.
Without the ability to convene a large group in person, the entire program was held online with free registration. During a post-event Zoom debrief for Portland participants, several of the lay leaders and non-federation professionals said they found some of the sessions very helpful.
“It was available to so many when people don’t have to pay for travel, meals, wardrobe…,” said Priscilla Kostiner, who has been a Jewish professional and active volunteer for many years. While she enjoyed this year’s welcoming format, she said she missed “chatting with people in the hallways.”
B’nai B’rith Camp Executive Director Michelle Koplan said she learned from sessions on topics such as mental health, leadership in crisis, and philanthropy and response to poverty.
JFGP President and CEO Marc Blattner wondered if the added value of this year’s virtual GA might prompt JFNA to livestream next year’s program, even if it is possible to hold it in person in Chicago.
“It was great to go,” said Julie Diamond, president and CEO of the Oregon Jewish Community Foundation. But she added it doesn’t make sense financially for OJCF staff to go when the GA is in person.
Sessions from this year’s GA are available online for anyone who wants to check out the programs. Visit generalassembly.org/what-you-missed.php.