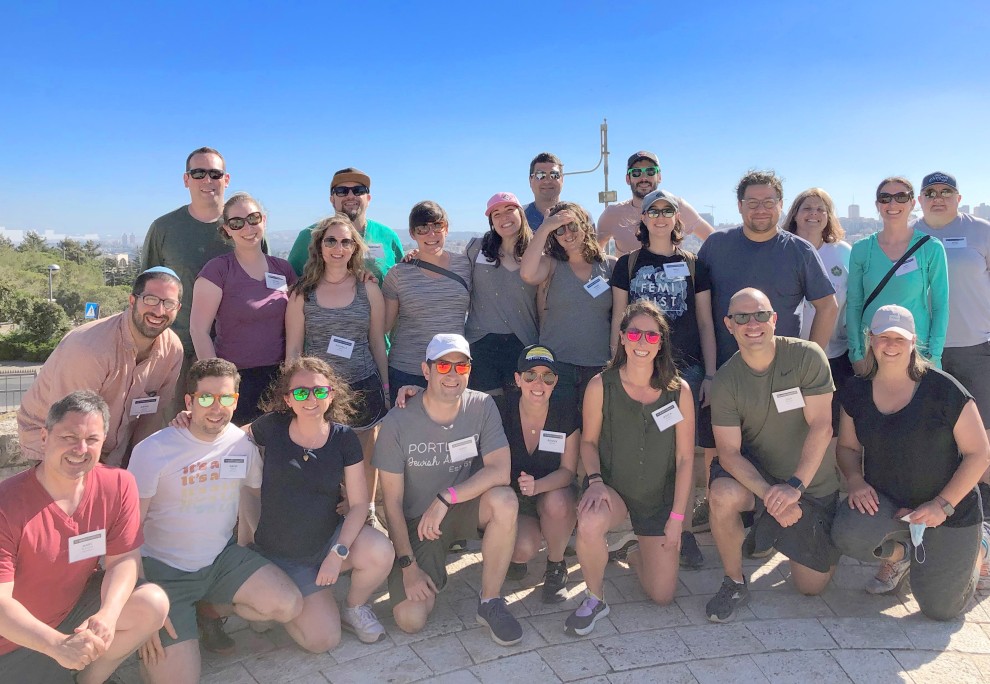 PHOTO: Portland’s Wexner Heritage Fellows and several of their spouses pose for a group photo at Hebrew University on Mt. Scopus overlooking the Old City of Jerusalem during their July visit to Israel as part of their two-year leadership program.

The Portland class of the Wexner Heritage Program had an extra lesson added to their study of Judaism and leadership – patience.
Originally planned to start in 2020, Covid forced the start of the program to be delayed until August 2021. Now in the middle of their two-year program, the Portlanders headed to Israel for a weeklong Summer Institute. A few of the participants had another lesson in patience when their stay in Israel was extended by two days due to two flight delays/cancellations for their return trip.
“We were able to learn firsthand from the stakeholders in some of Israel’s thorniest issues, and that was priceless,” says Christie Moore of participating in the WHP Israel Institute with her Portland cohort and other lay leaders from around the country.
“It was really an intensive learning trip, where we confronted many of the contradictions of Israel today,” says Portland Wexner Fellow Noah Barish, who lived in Israel as a college student and has visited as a tourist. “The Wexner Heritage Program Israel trip was unlike any of those prior experiences.”

The Wexner Foundation has more than 30 years of experience developing excellence in Jewish professionals and volunteer leaders in North America. The mission of the Wexner Heritage Program is to expand the vision of Jewish volunteer leaders, deepen their Jewish knowledge and confidence, and inspire them to exercise transformative leadership in the Jewish community.
“Our program was not about sightseeing,” says Jewish Federation President and CEO Marc Blattner. “It was focused on better understanding ‘Israel today’ – dynamics within the country, and, most importantly, ways as leaders we can effectuate change for the benefit of the global Jewish people.”
Wexner Fellow Josh Frankel was accompanied by his wife, Amy.
“Amy and I left Israel with more questions than we arrived, and I believe that indicates a successful journey,” says Frankel. “We also nurtured and developed incredible friendships with Jews from Portland and across the country.”
He says the amazing journey offered a lens into the beauty of the land and people of Israel. “Simultaneously the trip gave insight into the complex challenges facing Judaism, the Jewish people and Israel today,” he adds. “We interacted with Israeli and Palestinian leaders providing a balanced viewpoint of the ongoing conflict.”
The group heard from Mohammad Darawshe, a leading expert on Arab-Jewish relations, about the difficulty in moving toward an actual "shared society" for Arab and Jewish citizens of Israel. They also toured the West Bank/Judea and Samaria with Brig. General Rami Abudram, the chief of staff of the IDF's Central Command.
With that tour, “we saw how painfully the land divides and is divided,” says Barish. But he adds they also experienced “Israel’s loving relationship with the land during an idyllic farm dinner focused on shmita (the sabbatical year) with ‘seed to table. chef and restaurateur Hedai Ofaim.”
Barish was also impressed with the social entrepreneurs including those who provide secular educational content for haredi (ultra-orthodox) communities and expand career options for historically marginalized Israeli students.
“At the end, I think our group left with a much richer appreciation for Israel’s beautiful and challenging complexity,” he says.
Moore agrees: “I wish more American Jews had the opportunity to get to know the complex miracle that is Israel in the way that our group just did – our job now is to bring this perspective and optimism back to the community.”
“I came home really optimistic about and energized toward improving relationships between Israel and American Jews,” says Moore.
More than 2,000 leaders from 34 North American cities have participated in the Wexner Heritage Program.
The local initiative is made possible by the generosity of the Jewish Federation of Greater Portland with additional support from local donors, local Wexner Heritage alumni and the Oregon Jewish Community Foundation. This is the first time since 1996 that the Portland community has participated in the Wexner Heritage Program.
Blattner shared a few highlights of the trip in his weekly email, which you can read at
jewishportland.org/marcs-remarks/learning-with-and-from-leaders-july-15-2022.