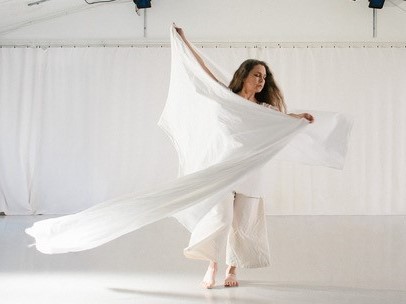 PHOTO: Jennifer Gwirtz in "Kol b'Isha" (photo by Chelsea Petrakis) is one of two performance pieces funded by the The Women’s Giving Circle of the Jewish Federation of Greater Portland for the 2021-22 program year.

The Women’s Giving Circle of the Jewish Federation of Greater Portland granted $26,000 to nine organizations to fund programs and initiatives that focus on women and girls, justice and Jewish continuity (see list below). (Women and girls refers to all cisgender women and girls, transgender women and girls, and non-binary people who are comfortable in female-centered spaces.)
The circle’s 2021-2022 grant-making cycle was its fourth year of grant giving. In its first three years, the giving circle awarded 18 grants totaling $60,465, which included a single grant of $18,000 last year to the Jewish Greater Portland Together COVID-19 Relief Fund after the pandemic struck.
Women’s Giving Circle is chaired by Felicia Rosenthal and Jessica Zutz Hilbert and is staffed by JFGP Campaign and Women’s Philanthropy Director Wendy Kahn, who also participates in the Giving Circle.
“We feel like our entire Giving Circle navigated the uncertainty around the year with poise, grace and a whole lot of fun,” says Jess.
The 17 women met virtually several times to review, discuss and fund a diverse array of grants for upcoming programming. They navigated the changing landscape of the past year, which continued to evolve between February, when proposals were submitted, and May, when deliberations and decisions were made. Felicia and Jess both say the women were impressed with the thoughtfulness around COVID protocols that each of the programs proposed to be ready for either in-person or virtual programming depending on conditions at the time of the program.
“We were blown away by all the stories shared with us during our conversations with grant applicants as to how they ever so creatively pivoted to function throughout the pandemic,” says Felicia. She adds that applicants had also put a great deal of thought “into the type of programming that will most benefit their participants as we all make our way out of social distancing limitations and back into group happenings.”
As it did its first two years, the circle funded the Oregon Hillel Women’s Retreat. This year, Hillel held a virtual retreat but hopes to have the retreat onsite at BB Camp this coming year. Other programs funded for 2021-22 are designed to bring people together in a post-COVID world.
“I believe everyone is focused on community building, re-emerging and reconnecting,” says Wendy.
The circle also provided funds for two performance pieces.
“We funded the performance pieces because of the ‘woman’s narrative,’ ” says Wendy. “Each program had a strong female representation and brings women’s voices into the public arena utilizing different artistic mediums. We are thrilled to be able to be part of these artistic endeavors.”
The nine programs all seem likely to occur as limitations ease and as we become re-acquainted with in-person experiences.
“We are probably most proud that these grant proposals that we received are from the community, by the community and for the community,” says Jess. “We know our dollars are going to be super impactful in getting these projects off the ground, and we are sincerely looking forward to watching that happen.”

WOMEN’S GIVING CIRCLE GRANTS
Hand2Mouth $1,000
Provide seed money. Program still in development.
Support to develop “Girls in Trouble: The Musical.” This evening-length theatrical project is based around Alicia Jo Rabins’ indie-folk song cycle, Girls in Trouble, a series of songs about stories of women in the Torah.
The Alberta Shul $3,600
General support for planning innovative and creative events for eastside, underserved young adult Jews with a social justice lens.
Oregon NCSY $2,500
Big Sister, Little Sister program at Camp Kesher with a focus on connecting and reconnecting post-pandemic/in-person and rebuilding community.
Chabad Jewish Center Hillsboro $3,600
Support for Jewish Women’s Weekly Club & Rosh Hodesh, which is the only source of Jewish connection in this geographical area of greater Portland.
Congregation Shir Tikvah $2,000
General support sponsor of “Kol b’ Isha,” performance of an original work by dancer Jennifer Gwirtz. The piece is a meditation on the older female voice, visibility and silences through a dance-based exploration of Jewish female modesty practices.
TischPDX $5,000
General support for Jewish Leadership Incubator program that trains and empowers younger Jews (approx. ages 22-44) who feel marginalized from the Jewish community to re-envision themselves as leaders in our community.
The Oregon Hillel Foundation $ 5,000
Fund annual Women’s Retreat with the University of Oregon, Oregon State University and PDX Hillel Campuses.
Mittleman Jewish Community Center $1,500
Initiate a program called “From Antiquity to Today: Are we our mothers’ daughters?” for the Russian community.
Congregation Neveh Shalom $1,800
Launch Women, Wisdom & Whiskey. A new program modeled on the successful “Dad’s Night Out.” The focus will be to partner with female clergy throughout Greater Portland to for a monthly one-hour social and learning opportunity that will be open community-wide.