Please submit your life-cycle news. Many people have clicked on this link hoping for news in this era of social distancing. So share your good news so people can kvell with you. Submit information for births, b'nai mitzvah, engagements, weddings and anniversaries to editor@jewishportland.org. To see obituaries, click obituaries. 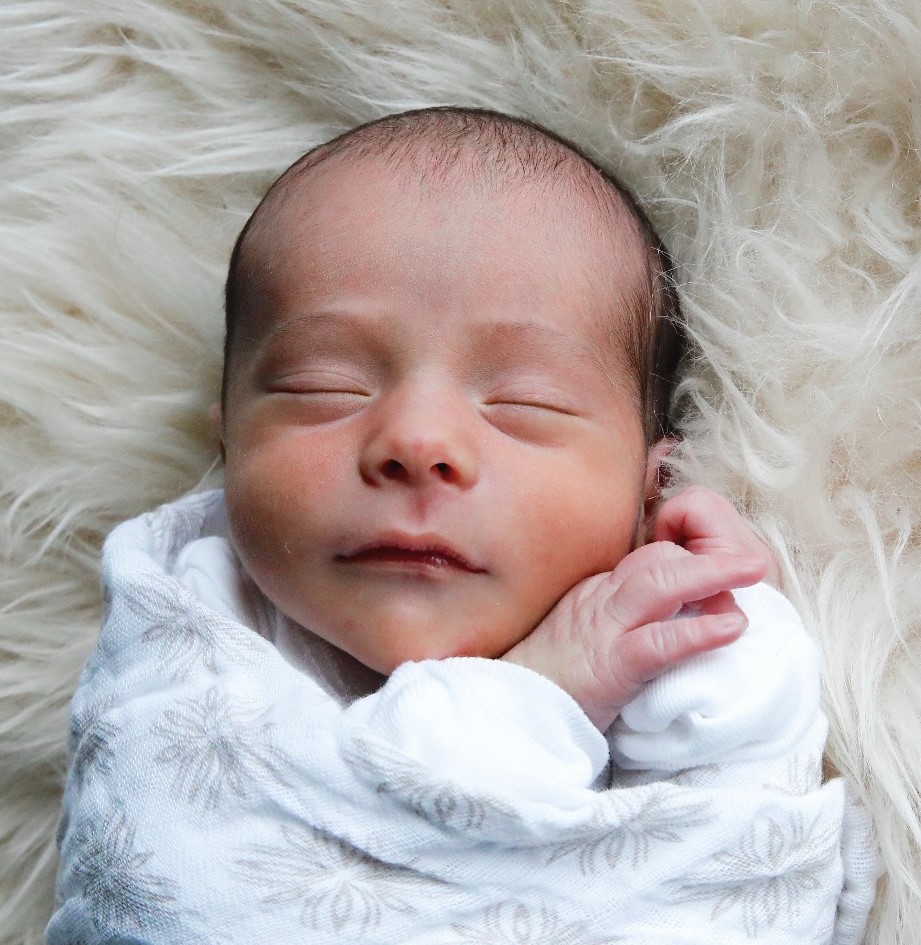 His grandparents are Diane and Richard Frank of Mobile, Ala.

Zac's brit milah took place at Debbie's home in Portland this past weekend and was led by her dear friend of 25 years Rabbi Elizabeth Dunsker of Congregation Kol Ami in Vancouver, Wash.

GABRIEL & BENNET WEINER
Congregation Neveh Shalom members Marla and Bob Weiner announce the birth of twin grandbabies, Gabriel and Bennett, born on Jan. 16, 2021. The parents are Matt and Mairin Weiner, the big sisters are Natalie and Sarah, and the big brother is Ryan. Other grandparents are Mike and Pam McCarthy of Livermore, Ca.

Gerel Blauer celebrated her 90th birthday Jan. 30, 2021. Her daughters, Janis, Shoshana, Shemaya and Karen, joined her for brunch in her well-ventilated “salon,” which she created in her garage to permit her to host family during COVID restrictions. 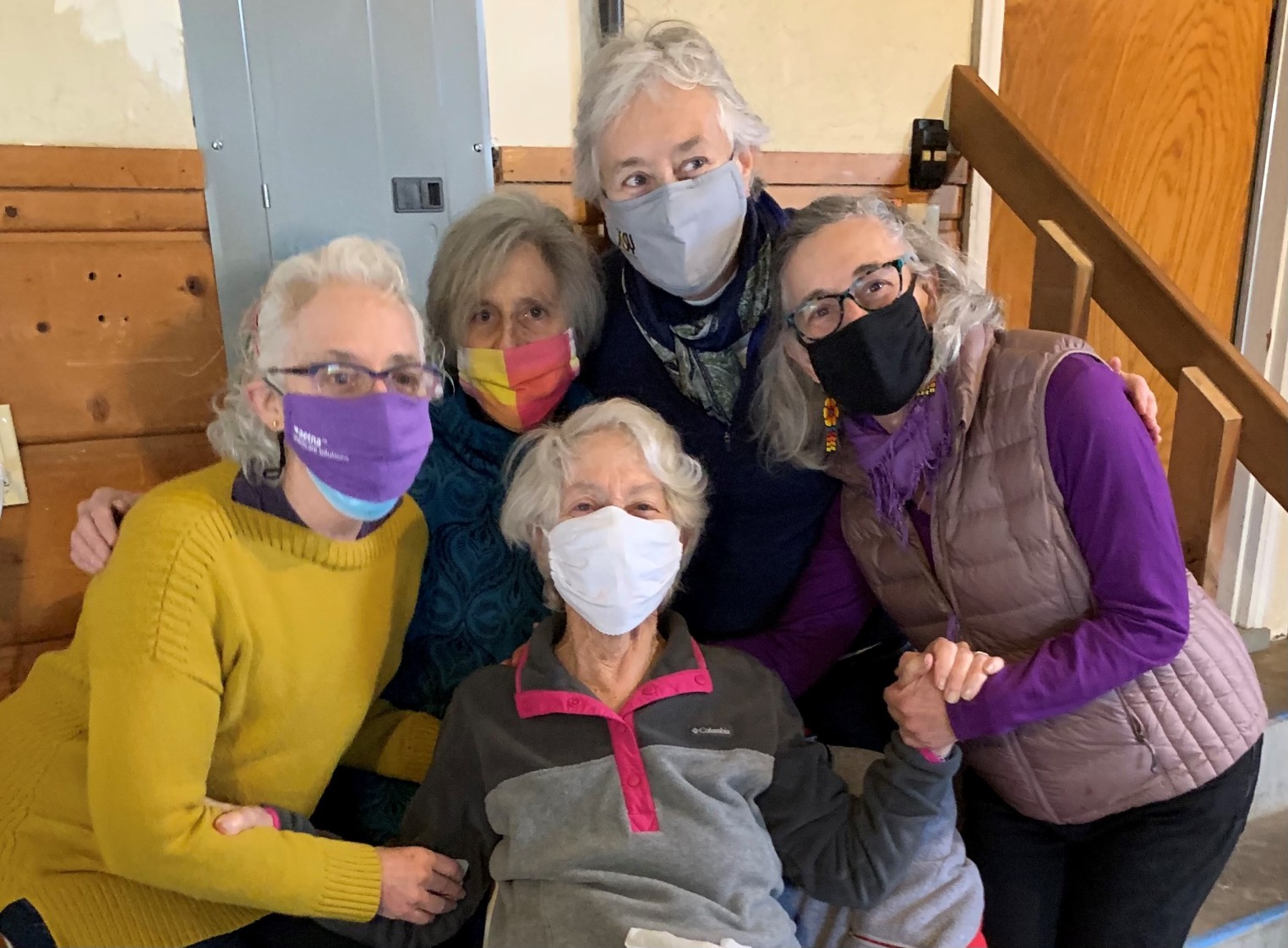 “It’s only a number,” says Gerel of turning 90.
Gerel is an avid gardener and played tennis from her teens until she broke her ankle about two years ago. Though she says her ankle is fine now, she has not returned to the courts since the Irvington Tennis Club she belongs to has been closed during the pandemic; and she admits she would need to be sure her balance is still up for the quick turns of tennis.
She still lives in her home of 58 years, which she shared with her husband, Henry, until his death in 2012. She still cares for the garden at Cedar Sinai Park that bears his name. For about 15 years, she cared for Robison Home’s eight gardens, until they were removed during construction of CSP’s four new households.
Gerel attributes her longevity to being active and getting out in nature. “I’ve been a gardener for many, many years. I do hard gardening – I dig.”
She attended B’nai B’rith Camp as a child. For most of her life, she has been active at Congregation Beth Israel, including taking an active role in the Temple Sisterhood. She has also been active at the Mittleman Jewish Community Center and Portland Jewish Academy. She served a term on the Robison board. She also volunteers in the archives for the Oregon Jewish Museum and Center for Holocaust Education (before COVID closed the building for much of the last year). She also spent 40 years as a tour guide for the Urban Tour Group, whic provides tours for schools designed to share the history, culture, architecture, and resources of Portland,
“I am a relic of Portland,” says Gerel. Yom Huledet Sameach, Gerel, until 120! 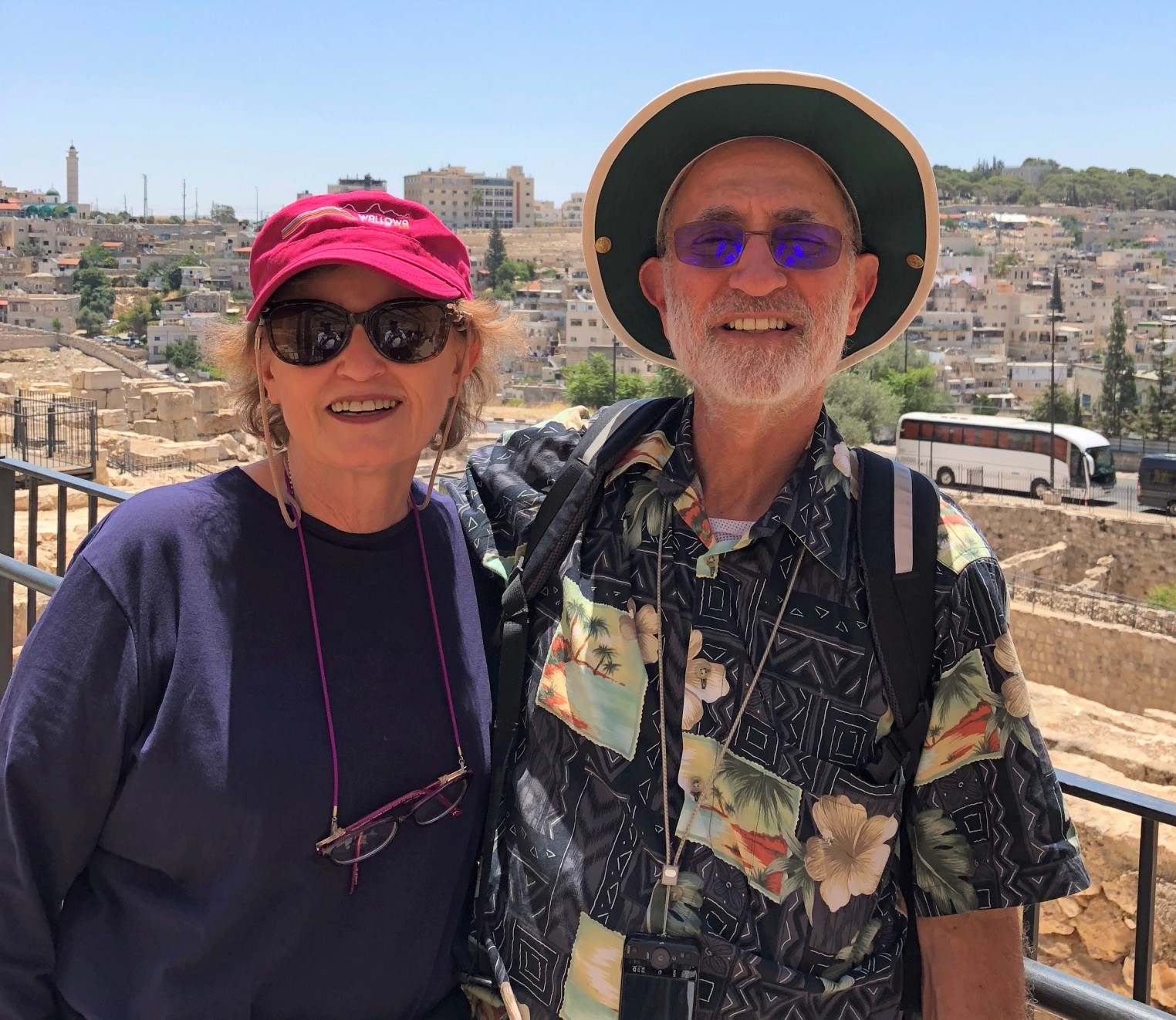 PHOTO: Donna and Charles Kuttner just outside Jerusalem’s Jaffa Gate during a 2018 visit to Israel. Photo courtesy of the Kuttner Family.

On Donna and Charles Kuttner's first date, she wasn’t impressed.
That may have had something to do with her migraine, but a second date two weeks later made all the difference. “We talked and talked,” Donna recalls, and the two Texas natives discovered similar tastes in movies and books – both even had a copy of Winnie Ille Pu, the Latin translation of A.A. Milne’s children’s classic.
A little over a year later, on Jan. 22, 1971, they married near Galveston, Texas, during a short break in Charles’ medical school schedule. In the five decades since, they’ve had three additional weddings (Reform, Conservative and Orthodox) as Donna completed her conversion to Judaism, and as the couple grew increasingly more observant.
Their religious journeys paralleled their geographic wanderings. They lived in San Francisco while Charles completed his residency in psychiatry, and there joined a Conservative synagogue. In 1976, when they moved to rural Linn County in Oregon, they joined Beit Am, the Mid-Willamette Jewish Community in Corvallis. And then in 1985, they joined Congregation Kesser Israel, though they didn’t move to Portland until 2001.
Charles, a psychiatrist for some 45 years, now works at Fanno Creek Clinic. Donna, who was a music teacher when they met, earned two additional master’s degrees and a Ph.D. in public health from Oregon State University.
For both of them, their journey together has deepened their appreciation of the concept of bashert, or “soulmate.”  They appreciate each other for their commonalities and their differences, for the journeys they’ve shared together, and the paths they have yet to explore.
“Fifty years is a long time,” Donna reflects.  “The only way you can make that work is to accept and respect the person for who they are, and who they will be as they change over time.”
Both Donna and Charles were married, briefly, to others before they met. “You don’t always pick the right answer the first time,” Donna says with a smile.
Their family includes daughter, Arwen, a Jewish day school teacher: her husband, Uri Ruttenberg; and granddaughter, Naomi, 14, in Englewood, N.J. Charles’ son, Jason, a clinical supervisor for a firm providing mental health services to adolescent dependents of military families, and his wife, Carrie, live in Honolulu, and Jason’s daughter, Io, 27, is working at a winery in Charlottesville, Va. 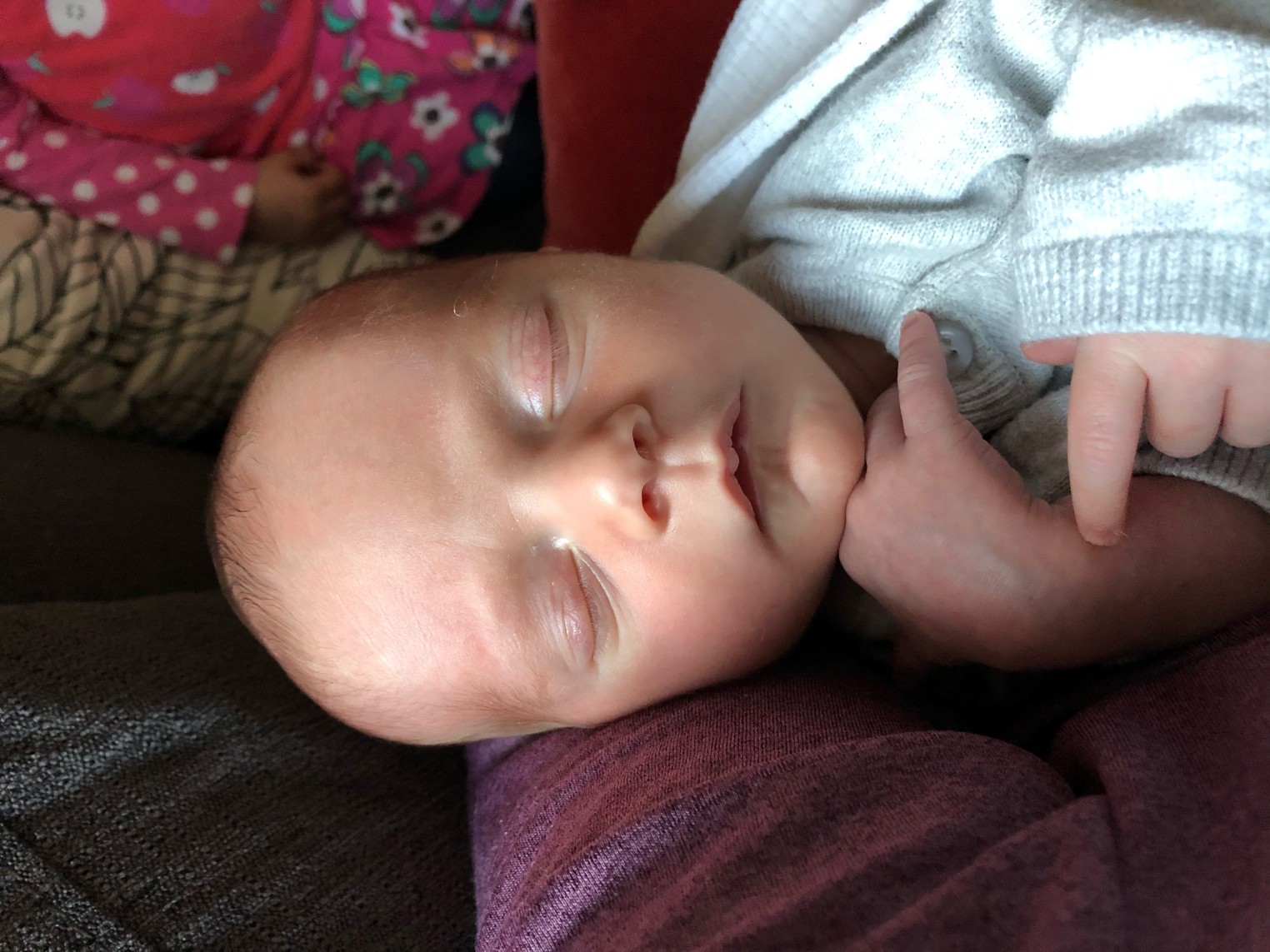 YONAH RAFAEL SOHN
Yonah Rafael Sohn was born Nov. 12. He is welcomed by his parents, Amy and Adam Sohn, and two proud older sisters, Talia and Eliora. Yonah is named after his great grandmother. A Zoom bris was held where family and friends from near and far were able to welcome him. The family are members of Congregation Kesser Israel. 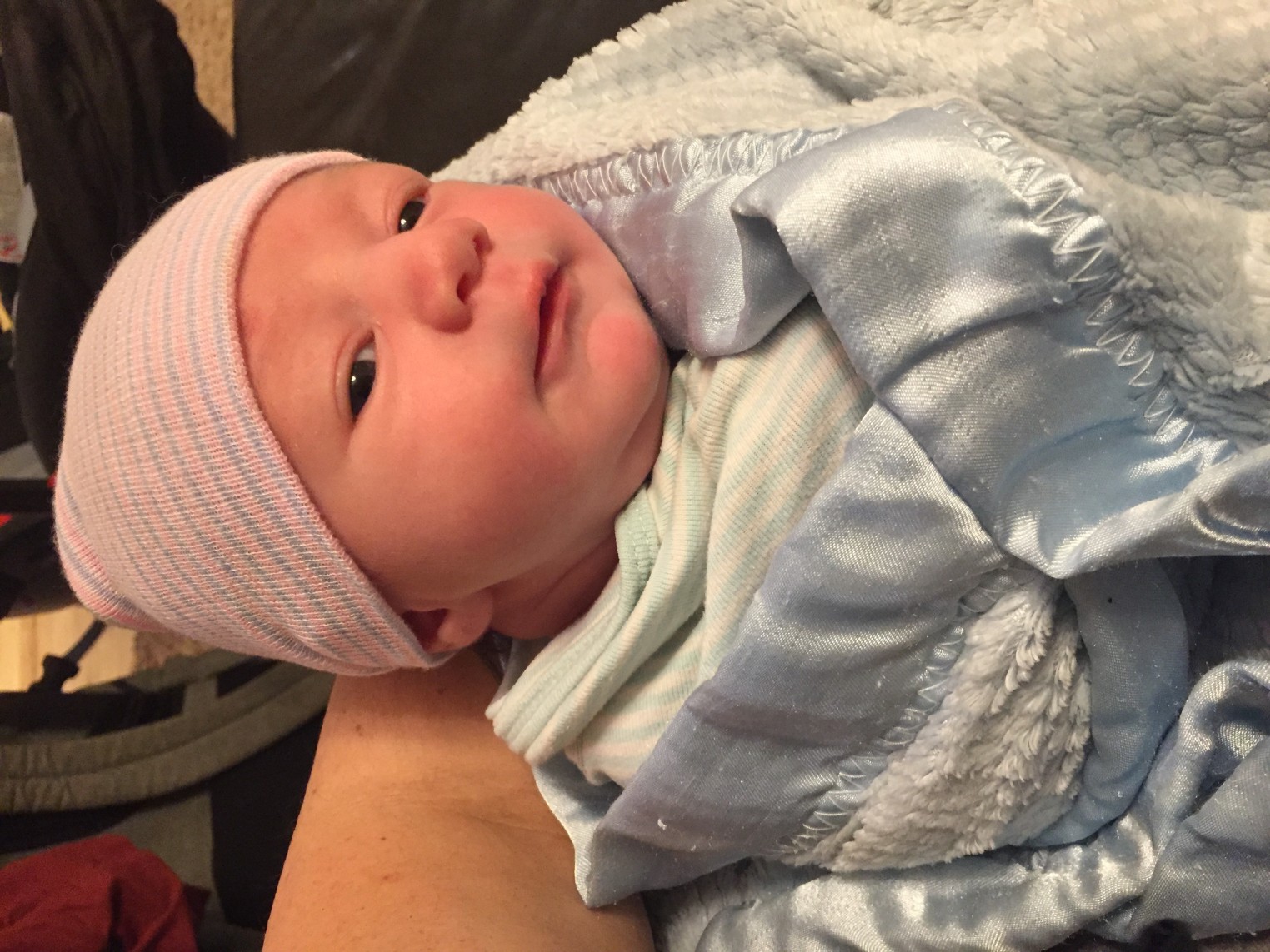 YAHEL LAWS
Yahel Laws was born Nov. 30 to Jared and Shani Laws. The bris was on Monday, Dec. 7, at the family home in Southwest Portland. Yahal joins brothers, Lavi, almost 2; Yahav, almost 4; and Moshe, almost 12. The Laws are members of Beit Yosef and Kesser Israel. Yahel was born on the third yahrzeit of Shani’s grandmother, Devorah Rozenblum. Devorah,  who survived Auschwitz, had been the only member of her family to survive the Holocaust.

ZACHARY LESCH-NINA SIMONS
Zachary Lesch and Nina Simons were married on Oct. 26, 2020, at the Oregon coast.
Zachary is the son of Harold and Jackie Lesch and grandson of Gloria Bacharach, all members of Congregation Neveh Shalom.  Nina is the daughter of Hilga Simons of Colorado and the late Paul Simons. The newlyweds live in Southwest Portland. Zach is the owner/operator of The French Toast Connection in downtown Portland.  Nina works for Lake Oswego High School.
A post-COVID reception will be planned.

Engagement
MIRIAM LAMBERT-MATYS WEISER
Congregation Kesser Israel wishes mazel tov to Miriam Lambert on her engagement to Matys Weiser.
Miriam Lambert, age 42, is a member of Congregation Kesser Israel. She was born and raised in Eugene, and has lived  in Portland since 2007. She is a medical physicist employed by Kaiser Permanente.
Matys Weiser, age 54, a member of the Hasidic community in the Catskills, New York. He immigrated from Poland in the mid-1990s and is an entrepreneur.
The couple plan to marry in the spring of 2021, in New York, provided the pandemic restrictions have lifted by then. If a large ceremony isn’t possible, they may do a small family ceremony in Portland instead and delay the large reception until it’s safe to gather again.
Following the wedding, the couple plans to live in Portland, with frequent visits to Matys’s family in New York for the chaggim and vacations.

Wedding
JONATHAN & TOSHA ESTERMAN
Mazal Tov to Yonasan Aryeh (Jonathan Esterman) and Tirzah Miriam (Tosha Esterman) on finishing their conversion with the Milwaukee Beis Din and on their wedding that took place on 4 Elul 5780, August 24, 2020, in Portland.
Tosha works as an educator at Maayan Torah Day School and Yoni writes about Judaism and Semiotics at YidBrik, podcasts about Kabbalah on Kabbalah Pod and makes Kabbalistic jewelry for sale on Etsy. Both of them also have their own coaching practice, Aytz Chaim Life Coaching.
The chuppah ceremony was officiated by Rabbi Ken Brodkin of Congregation Kesser Israel. While the Estermans would have loved to have a larger wedding for the community, the current COVID-19 restrictions required a more creative approach. They invited up to 25 for attendance in person with face masks and social distancing for a backyard ceremony with picnic-style meal. Everyone else, including attendees in New York and Israel, dialed in via Zoom.
The Estermans moved into the community more than three years ago and have made the Jewish Portland community their home. This ceremony symbolized a completion of settling in for them, and they are excited to continue to connect in this community and continue to grow.
For those that were unable to attend the wedding in person or online, the ceremony was recorded and can be viewed at https://yidbrik.com/wedding.
Births

MARTEL
Congregation Beth Israel wished Mazel Tov to Gary and Sheryl Martel on the birth of their granddaughter, Natalie Florence Martel, to Benjamin and Rachel Martel on April 7.

WEISS
Congregation Beth Israel wished Mazel Tov to Marcia and Stuart Weiss on the birth of their grandson, Arthur Joseph DePasse, on April 28.

MOSHE HARTFORD
Moshe Yitzhak Hartford was born May 5, 2020, to Adam and Seanne Hartford. He was welcomed home by big sister Elianna. The family belong to Congregation Kesser Israel. A Zoom bris was held May 12.

ZISSEL BIALO
Zissel was born May 20 to Rabbi Dov and Chani Bialo of Chabad at Reed and Chabad ofo Southesst Portland. She was the first grandchild to be named after Chani’s dear Bubbe.

BLOOM-ABU
Mazel Tov to Melissa Bloom (Aloha, Ore.) and Oren Abu (Kiyrat Malakhi, Israel) on their wedding on May 12, Lag B’Omer. Guests were able to join in virtually from all over the world for their backyard celebration.
Melissa owns Yo Zone frozen yogurt in Beaverton, and Oren hopes to go back to work as a mechanical technician for Intel.
The chuppah ceremony was officiated by Rabbi Menachem Rivkin of Chabad of Hillsboro and Rabbi Chayim Mishulovin from Everything Jewish.  Rabbi Motti Wilhelm of Chabad of SW Portland and Rabbi Shneur Wilhelm of Maimonides Jewish Day School also participated.
Melissa and Oren had planned to have their chuppah in Israel.  When the pandemic broke out they realized, “We do not know what tomorrow brings, and we want to bring joy to our friends and family.”  The decided that to wed on Lag B’Omer (the earliest date one can have a Jewish wedding after Pesach).
Within three weeks they turned their back yard into a beautiful site for the wedding.  Their sukkah was painted white to make the chuppah; table and chairs from the closed Yo Zone were arranged to seat guests 6 feet apart; and Melissa used her extensive event-planning decor.  There were a few things bought online including Oren’s suit and Melissa’s wedding dress.
Following the Zoom wedding (with more than 200 people) Melissa and Oren went to the driveway where more than 20 cars came by to shower them with Mazel Tov. After a quick bite to eat, the newlyweds joined Chabad of Oregon's  Lag B’Omer car parade.
“It was everything and more that we could have dreamed and hoped for being a Zoom wedding. ... We have no regrets and loved that we brought joy to so many that day and will have an amazing story to tell our children one day.”
Mazel tov to Melissa’s parents Michael and Jaimee Bloom, siblings Liza and Beth Milliner, Scott and Amy Bloom, Jeramie Bloom and Andrew Thorry (Portland); to Oren’s family Zmira and Mier Abu, siblings Oriana and Angelo, Shay and Eniav, Alon, Shira and Sharon, Shlomit and Esaf, and Tzil (Jerusalem, Petah Tiqva, Kiyrat Malakhi, Israel); as well as their 14 nieces and nephews.