Our 75-hour solidarity mission has come to a close and soon we will depart Israel for Portland. Beyond the learning and meeting with government officials, we had the chance to hear directly from the people. This to me was the most meaningful and inspiring part of the trip. We visited a moshav in Timorim in the south of the country. We drove through a beautiful set of homes and then walked down a long cul de sac. What we saw was shocking (see photos). A beautiful home 20 miles from Gaza that had been destroyed by a missile.​ 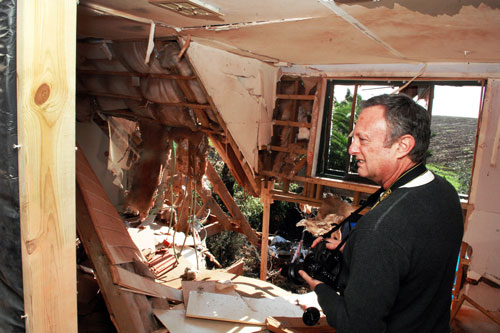 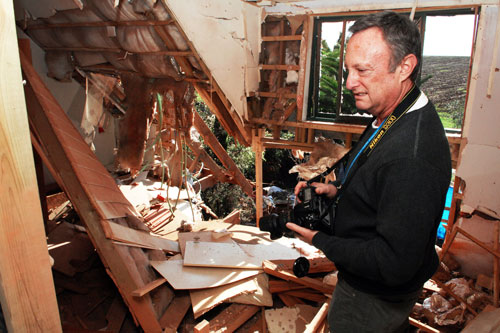 We met Molly, the woman who spent 18 years building this beautiful home with her husband, and three children ages 13, 11 and 9. She described that 2 ½ weeks ago at 11:00 p.m. the warning siren went off. Her children were already sleeping in the “safe room” (they had been doing that for many nights), yet Molly and her husband had to race from their second floor bedroom to the “safe room” -- understanding they had maybe 30 seconds to get there (their home is further from Gaza). And then, BOOM! -- the missile went through their roof and right into their bedroom where they were seconds before. Fortunately, everyone was safe.

Molly was remarkable. First, she described how supportive others in the moshav have been to her family. But, at the same time, Molly told us she had to go back to work (she practices homeopathic medicine) -- both for her family’s financial stability and to support others who are experiencing stress and trauma. She wants to be strong -- primarily for her children, but it is not easy. Her children have been dramatically impacted and now suffer from post-traumatic symptoms including hyperactivity and sleeping challenges. Her closing words, “In the end, it is just a house and we will rebuild. But I wish it was only that easy.”

Our group traveled to Beersheva to visit the American Jewish Joint Distribution Committee's Center for Independent Living (CIL). The CIL is a community based multi-service center which provides information, activities, and support to enable people with disabilities to live as part of the general community. In some ways, think of the CIL as a JCC run by and for people with disabilities.

Beersheva, I did not realize, was hit with the largest number of missiles during the conflict. But how are those with disabilities supported throughout? We met the Director of the CIL, a remarkable woman named Dalia, who shared that once the rockets began to fly she opened a “command center” in her personal apartment with 24 employees working together day and night. They would make sure that their 3,000 disabled clients (Jews and local Bedouins) had food, proper medications, and even assisted in moving beds, if needed, into “safe rooms.”  Those with hearing impairments who cannot hear the sirens were provided with automated “buzzer” systems that work in “real time.” Each day, all 3,000 people were called for a “check in” and to see if they were okay (at some points, calls were made while the sirens were going off).

We also met with representatives from the Israel Trauma Coalition (founded in 2001 following the second intifada). The ITC is a coordinating body between multiple social service organizations focused on supporting individuals, teams, and local communities. They have created “resilience centers” throughout the south as a way to help those suffering with trauma.

As I have said multiple times, the trauma grows later. In fact, there are currently four times the numbers of people seeking counseling now than during the conflict itself. With this increase comes burnout among teams of social workers.

The passion and commitment never ceases to amaze me. Moreover, the resilience of people during times of distress is truly remarkable. But not everyone has the inner strength to move forward, and that is where our Jewish communal efforts and financial support truly make a difference.

Our final program included hearing from Amir, a fighter jet navigator in the Israel Air Force who was involved in multiple sorties during the conflict. Here was a handsome young man sharing how decisions are made about specific targets and the challenge to do what he does.

Amir was called to duty to join his squadron (he works in a small marketing company that has three other reserve pilots and during the conflict they had to close down their firm since each was called to duty). While flying, the goal is to have zero collateral damage. What we learned is that before firing any missiles, each target is reviewed by a lawyer to make sure it does not break international law. Then, coordinates are set. As the plane approaches the target, there is a one minute countdown. During that period the target is continuously monitored to make sure no innocent civilians are in harm’s way (this is even after leaflets are dropped earlier and phone calls are made to alert people). On multiple occasions, Amir told us that targets were aborted with only seconds prior to pulling the trigger.

Amir explained that of the 1500 targets, there were no missed shots. That is incredible. Yet Amir did share his sadness for the 16 innocent civilians in Gaza who were killed during the conflict. He said, “Every flight you think about the target you are to take out. Yet, you always worry about collateral damage and the potential impact on innocent people. It is a difficult moral dilemma. Yet, as Israelis, we are proud of how we conduct ourselves.”

This message was reinforced when we met with leaders from Kibbutz Eshbal, an organization the Jewish Federation of Greater Portland has funded for the past six years. Educators from the kibbutz were called in by the Israel Defense Force to work with soldiers during the conflict who were preparing for a possible ground invasion (that did not happen). Ready for battle while watching rockets fly into Israel (and impacting their own family and friends), it was understandable for soldiers to feel anger, hatred and perhaps even wanting revenge. However, the IDF’s priority is to defend Israel. Therefore, conversations with the soldiers centered on moral values and making the “right” decisions.

This was a mission like none other. The roller coaster of emotions was something I never expected. They ranged from anger (learning what is being taught to children on Palestinian TV), empathy (families impacted during and after the conflict), to pride (Israel’s moral values during the military operation). And, now that it is over and I am about to board my plane home, I recognize the continuous challenges impacting Israel and her people – and the importance of our support.

Shabbat shalom and happy Chanukah to you and your family. Please make the most of the myriad of Chanukah festivities throughout the community.