Should I stay or should I go now?
If I go, there will be trouble
And if I stay it will be double

On Sunday and Monday of this past week I was privileged to be in Paris for 47 hours representing Portland’s Jewish community on a Jewish Federations of North America (JFNA) Solidarity Mission along with 48 other community leaders from 18 communities across America. It was truly an inspiring and, at times, sobering experience.

The Jews in France are anxious! They are unsure of their future in the country. Many have left for places like Israel, England, Canada, and the United States. Others are contemplating. The majority will stay. But, the Jewish community in France is slowly shrinking while the Muslim community is already 10 times larger and growing rapidly. Anti-Semitism is all around and the Jewish community is scared. And recent events continue to exasperate the feelings in the community. Should they stay or should they go?

My two days there were quite informative and emotional, hence the longer-than-usual email. Let me share what I experienced to help you better understand the current situation and the future of Jewish France.

Our mission started at the magnificent 140-year old La Victoire Synagogue, also known as the Great Synagogue of Paris, where we were welcomed by the president of the congregation, M. Jacques Canet (family was majority owner of Lacoste/Izod and Yves Saint Laurent design houses) and Rabbi Moshe Sebbag.

What followed was a briefing by Tali Ochayon, Chief Executive Deputy of SPCJ (protection service for the French Jewish Community.) She is tasked with coordinating the longstanding security protection, emergency preparation, and coordinated response for the network of Jewish institutions in France. Currently, following the Charlie Hebdo and Hyper Cacher supermarket killings, multiple armed French soldiers are stationed (in many cases, the soldiers literally live at the institution, including in Jewish day schools) at every Jewish institution (but not every Jewish business where issues continue to arise). The French government currently covers the cost for these soldiers – but for how long? What will happen when they leave? Past security was certainly not at this level (primarily volunteers trained on the basics of attentiveness and procedures), so the community is raising funds to provide enhanced security for the future.

From the synagogue, we went to a Jewish Agency sponsored Israel Program and Aliyah Fair. There is a long and successful history of shlichim (ambassadors from Israel) deployment, Jewish and Zionist education, and involvement with security planning assistance. One remarkable program which was developed years ago in partnership with the Jewish Agency and French benefactors brings every French Jewish teen to Israel during the summer following their 10th grade year.

In the past, Jewish Agency fairs showcasing Israel programs and educational opportunities for young people attracted roughly 1,000 people. They estimated that close to 3,500 young people (ages 18-30) were in attendance during the day we visited, which included those wishing to open files and start the process of making aliyah. 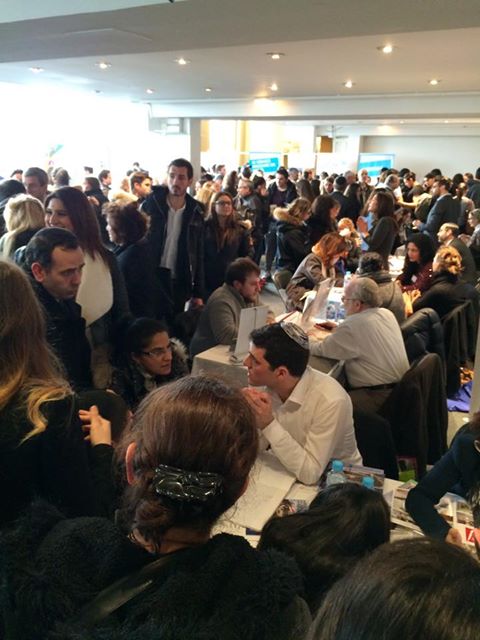 All of this is made possible by core allocations to the Jewish Agency from Jewish Federations nationwide, including our own. We should be proud.

Following the extremes of a somber security briefing and an exciting Israel Fair we made our way to the Hyper Cacher supermarket, the site of the January 9th murders. The supermarket is on the first floor of a residential building at the corner of two busy commercial streets. The store is closed with three armed soldiers standing just inside a police erected barrier. At the base of the barrier are hundreds of flowers, candles, signs and an Israeli flag. 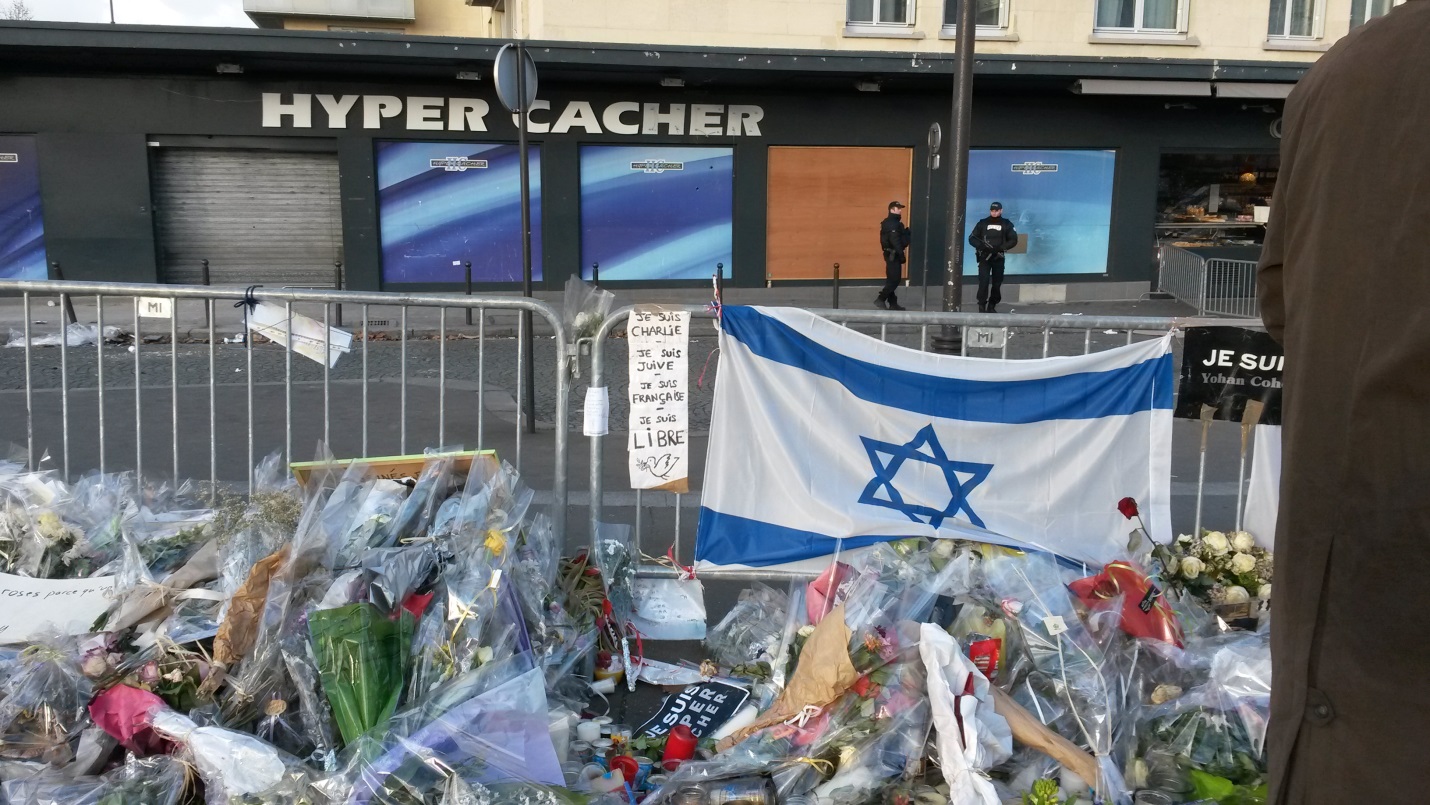 Unfortunately, we have experienced this before. The Dolphinarium discotheque.  Sbarros.  Mike’s Café. The AMIA building in Argentina. We have experienced too many places where innocent Jewish lives were cut short by senseless hatred, yet becomes holy when we stand together and bear witness. In the cold, on the street, with cars, buses and people rushing by, we held a Yizkor service and said Kaddish. And then proudly, we sang of hope. We sang Hatikvah.

Our first evening ended with a panel discussion with leaders from the four main Jewish organizations (the French Jewish community is highly organized and functional) on the “State of French Jewry.” These organizations oversee the coordination of over 700 Jewish institutions throughout the country. The lead organizations include:

The following day we met with leading government officials, including the US Ambassador to France and Monaco, Jane Hartley, and the Israel Ambassador to France, Yossi Gal. Each gave their own assessment of the situation – anti-Semitism continues to rear its ugly head and the Jewish community is concerned for its future. But, the French government continues to do its utmost to protect the Jewish community.

It is important to note that multiple problems are facing France – a failing economy, 20% unemployment among people ages 20-35, and the departure from France of graduates from the top tier universities. Add to that, a growing radicalized Muslim community and heightened anti-Semitism and anti-Israel sentiments in France and across Europe.

Our program included a visit the Lucien de Hirsch School, the oldest Jewish day school in Europe. Over 1,000 students attend the school currently.  Nine armed French soldiers live there.  Over 30,000 children attend Jewish day school, equal to the number of Jewish students in public and in Catholic schools. Parents are struggling with where to send their children because of concerns of anti-Semitism both inside and outside of schools.

We had the chance to meet with Philippe Val, who for 17 years was the managing Editor and Editor-in-Chief of Charlie Hebdo. He was devastated by the recent events.

Our final program included an emotional farewell dinner where we heard firsthand the chilling testimony of Sandy Charabi, one of the hostages at Hyper Cacher Supermarket, and Alexandre Cerravalle, a Paris policeman and Sandy’s boyfriend, who helped save her as she texted him from inside the store. I am unsure how she will ever get beyond her experience.

So, where do we go from here? Richard Bernstein from Miami, a participant on the mission, shared the following observations:

1. In thinking about the French Jewish community, keep in mind seven numbers:

2. The community has financial resources, is well organized and very much rooted in France. They are proud French citizens, however, the notion of citizenship in France (laïcité) doesn’t easily allow for the concept of “hyphenated" identities as we have in America (i.e. Jewish-American, African-American, etc.). This results in an “otherness” of being a Jew that is nuanced and hard for us to fully grasp. The difference between being a “Jewish-Frenchman” and being a “French Jew” is significant.

3.  The French Government, for the time being, is responding appropriately for the protection of this “citizen group” (the French Jews). The presence of soldiers in full military posture in the doorways of the JCC, the day school and the synagogue is both reassuring and frightening. Especially for children. But the real problem is that it is not sustainable. No government official we spoke with (French, Israeli or American) could give an answer to how long the extra security protection would be provided or how will it be determined when it will be withdrawn.

What were their main messages for us to take home?

First, and we heard this repeatedly, how can the internet be regulated? It is the easiest way to spread hatred. Every official called for a ban on hate speech on the internet. Is that possible? As one government official said, “we cannot wait for the speed of justice when compared to the speed of the internet.”

Second, making sure security arrangements are in place once the armed soldiers are removed. Will the community be prepared and have the funding necessary? To date, Jewish Federations from across North America have provided close to $1 million for this purpose to go along with funds raised by the local community.

And, finally, they are looking at what I refer to as an “intra-aliyah.” Can the Jewish community help those Jews living in the suburbs and smaller communities around the country in primarily Muslim areas move to Jewish neighborhoods? Funds are being raised to assist families with housing, etc., yet the main concerns for families is whether they can find appropriate employment in those new areas. They want to move, but will they be able to? This is something to watch.

We cannot be silent.  Je suis Juif.  I am Jewish.  I was proud to be there representing Portland. Senior representatives from the French, Israeli and United States governments heard our concerns and understood why we were there – to stand in solidarity with our French mishpocha.  Let's stand together!

Shabbat shalom to the French Jewish community and to all of you.

PS – Here are links to additional materials that may be of interest to you.

Background on Jewish organizations in France