Campaign 2015 continues its exciting pace. We have raised $2,507,843 in just 80 days. THANK YOU! And now we are in the final month of the calendar where many of you will make your charitable donations for the year. Please join so many in our community as we strive to reach our $4 million goal in total fundraising by visiting www.jewishportland.org/donate.

Shabbat Shalom from Jerusalem! When you receive this, the sun will have set and I will be joining Portlanders Ellen Lippman and Steve “Rosy” Rosenberg for Shabbat dinner. These remarks are longer than usual, but I hope you will read.

I am here with two community members – not just touring Israel, but seeking to listen and learn more about the “real” Israel. Our itinerary is focused on visits to programs funded by the Jewish Federation of Greater Portland, funded by your generosity, including seeing the continuing efforts (and, yes, they are continuing) following this past summer’s conflict with Gaza.

In our first 24 hours we had the opportunity to visit Sderot, and the Hof Ashkelon and Shaar HaNegev regions, the areas closest to Gaza. We visited the Shaar HaNegev High School where 1200 children attend this magnificent school focused on science and technology. Every building is reinforced, and there are shelters all over the campus so school does not get interrupted if/when rockets fall. It is a safe space. Signs are posted throughout stating – when the sirens go off – stay where you are – everything will be okay. Not the typical sign seen in our local schools.

We met with several of the students. When asked about their experiences this past summer they shared – “terrifying, but you get used to it…your safe room and shelters just become a regular part of your life….we are not going to allow them to change our lives” There was defiance, mixed in with normality. These were 16 year olds – can you imagine living with that mindset?

We visited Sderot. This area was hard hit and a major target. In fact, at the police station they have a large collection of exploded rockets from Gaza.

Maybe I am naïve, but I really had no clue just how large and heavy these rockets were. You could also see how unsophisticated they were – especially when compared to an exploded rocket from the Iron Dome system (on left). 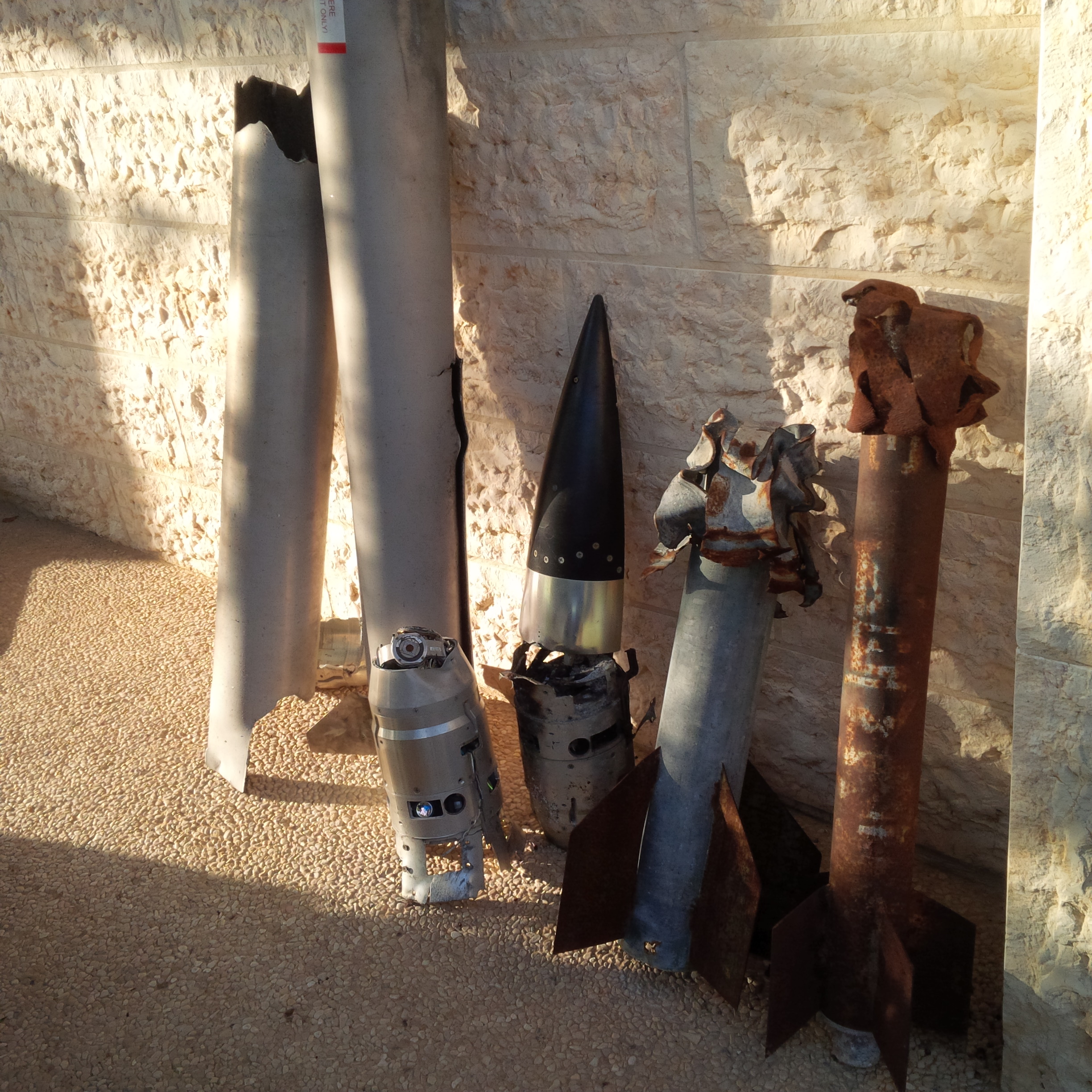 We learned more about the ongoing work of the Israel Trauma Coalition, a national program that our community funds. Interestingly, the number of clients is currently growing. Why? – The war was several months ago. Post-traumatic stress is now being felt by more and more people. As one person shared, “it is easier for people to go from a ‘regular situation to an emergency’ than to transition from an ‘emergency back to normal.’” The elderly are the most resilient – they have been through it all before. But the trauma in children, and moreover in their parents, is pervasive.

We visited the Hof Ashkelon Regional Council offices. We met the Chair of the Regional Council (a genuine war hero from the Yom Kippur War, one of Israel’s leading advocates for nature preservation with a program to save the honeybee population in Israel) and also toured the “control center” used during the recent war. You may recall, several years ago, the Jewish Federation funded a renovation of a bomb shelter at the council headquarters for the region to use during times of conflict. 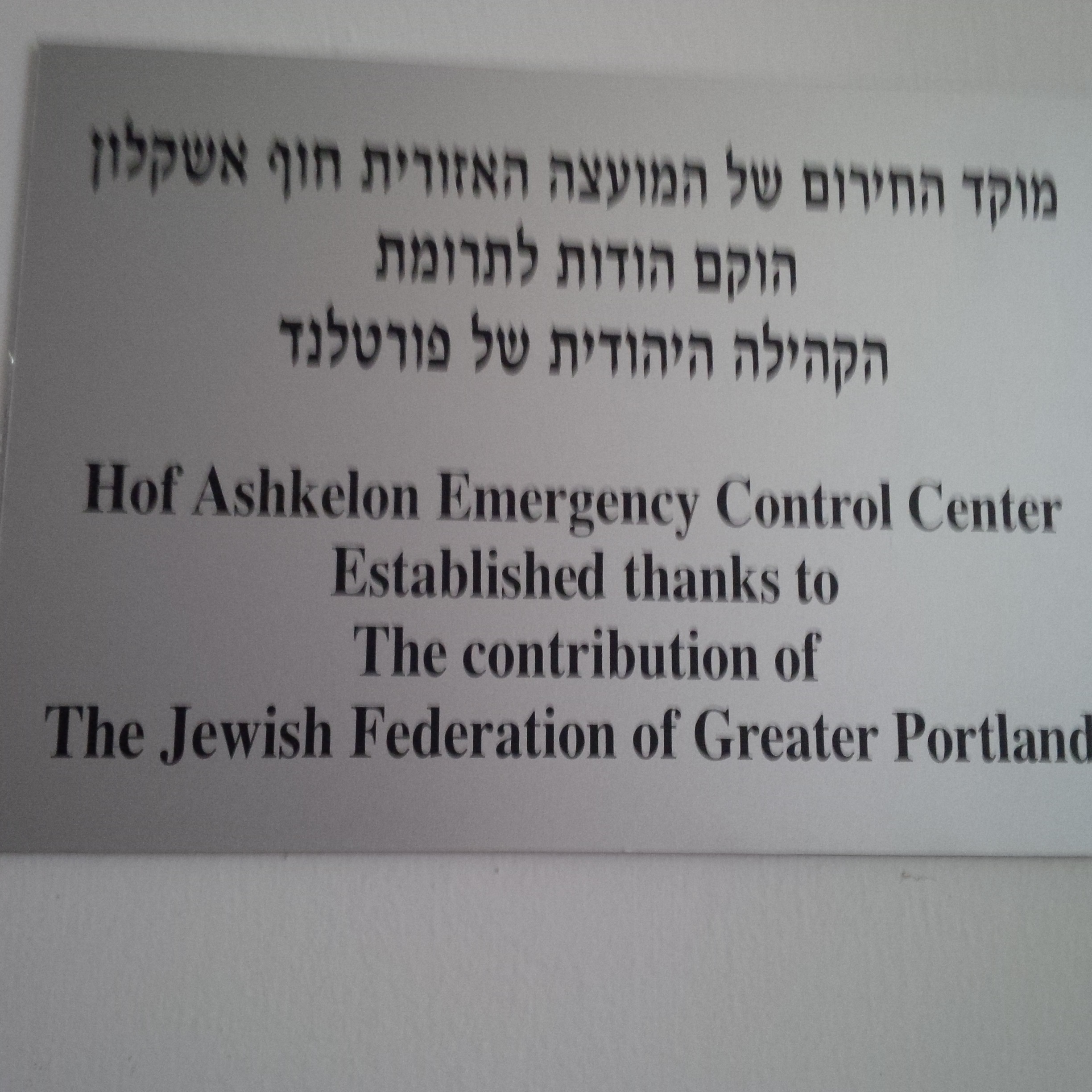 It is simplistic and amazing – each “department” (i.e. social services, transportation, communications, etc.) for the region has its own area with bulletin boards, computers, printers, and contact information for each moshav, kibbutz, and village. 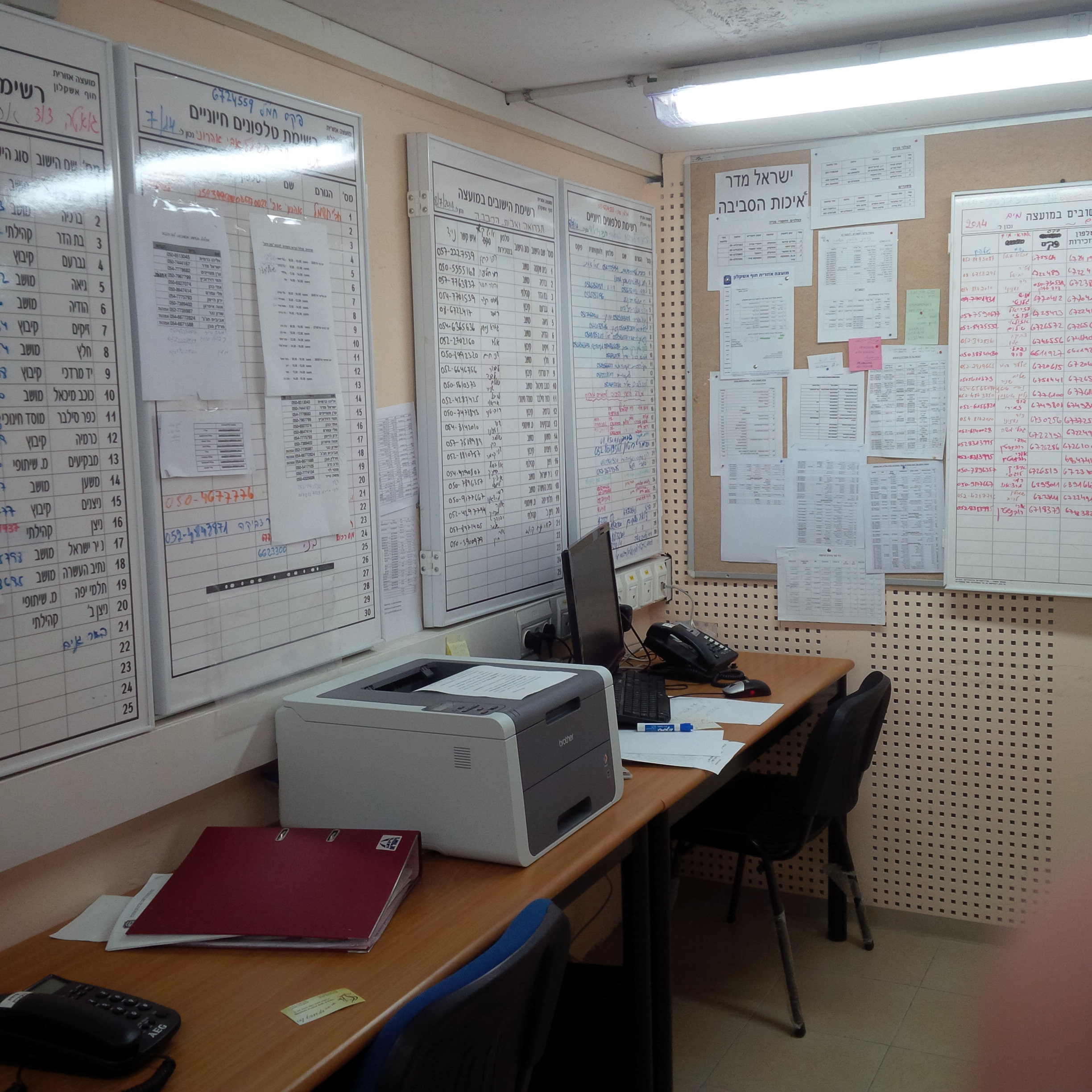 The region is so grateful for our generosity, and the control center is the model for communities across the country.

We ended our day at Moshav Netiv Ha-Asara. This moshav (cooperative community), literally less than 1 mile from Gaza, was founded by 70 families in 1982 who were evacuated from Sinai as part of the peace agreement with Egypt.

On this moshav, everyone seems to have “souvenir” rockets from Gaza, In fact a house on the moshav was destroyed by a rocket (the family is currently living in a yurt next to the construction of their new home). Following the bombing, the next door neighbor decided to take a stand. She needed an outlet to control her emotions and anxiety. On the large concrete security wall protecting the moshav, she created a “Path for Peace”, an art mosaic built on the wall. 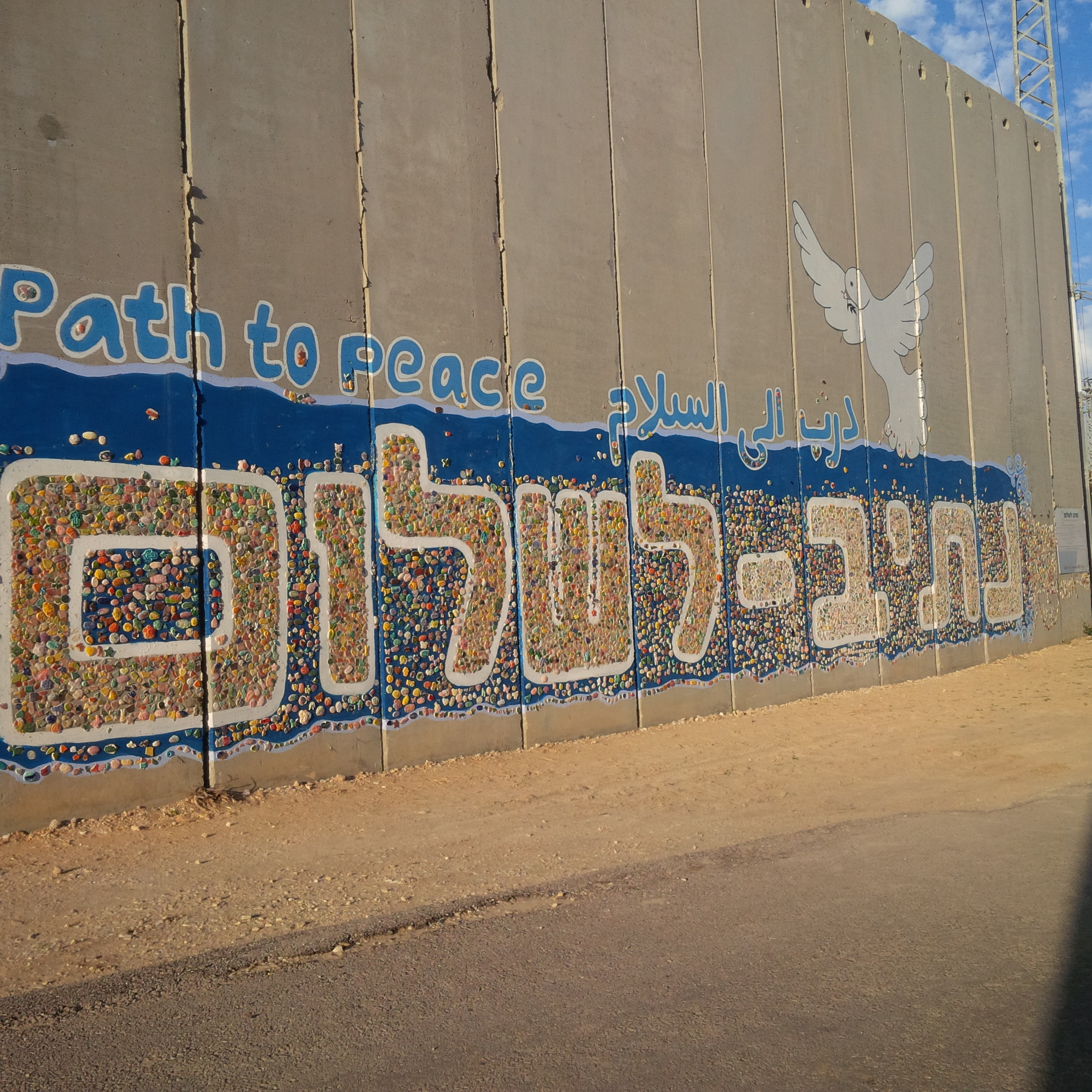 It is beautiful. It sends a powerful message. And we took part in adding our own tile to make our own statement.

We ended our first day in Israel at the home of Pnina, Amnon and Ilan. 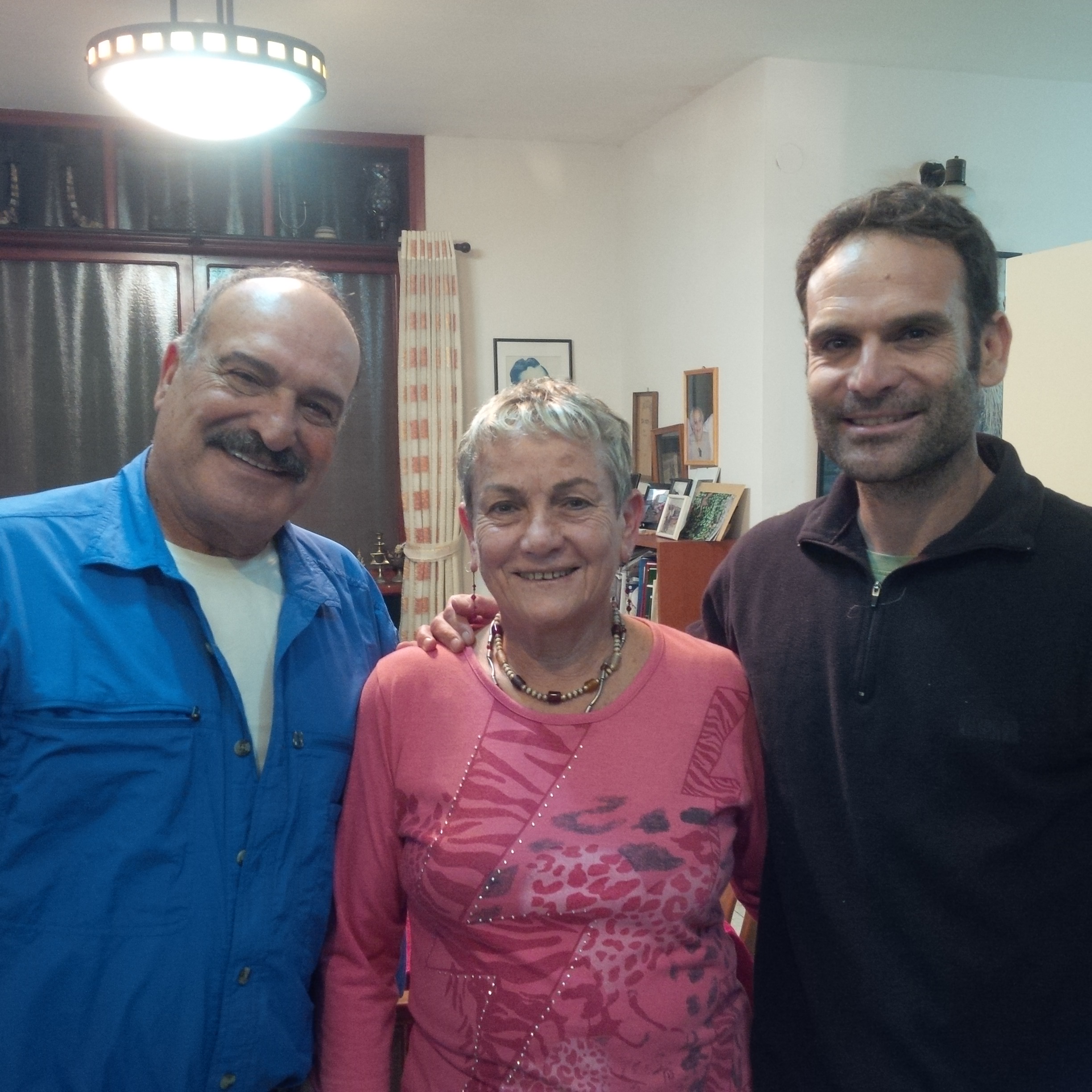 So much of what makes these visits special are the people-to-people connections. We were invited to their home for a lovely dinner – but more importantly, a conversation. (As an aside, the family grows 200 million seeds a year that they export to help grow peppers and watermelons around the world.) We talked about everything from their time living in the Sinai to the summer war and the current political landscape in Israel.

Everyone we meet seemingly has two things on their minds – the upcoming elections and the sentiments following this past summer’s Operation Protective Edge. They seem to be intertwined. What parties will receive the most votes? Who will be the next Prime Minister? What will a future coalition look like? Is the election about external or internal security? What about domestic issues throughout the country? And how will any peace process with the Palestinians move forward? Lots of questions – and no real answers until the elections in March 2015.

Before Shabbat, and during our trip up to Jerusalem, we stopped at the Har Nof synagogue to pay our respects to the four men murdered. Upon approaching the synagogue, one could visibly see four bullet holes in the front windows. Once inside, we were greeted by congregants who shared their own personal experiences of that morning. How scary – and their own personal trauma continues. They explained that the scene could have been even worse since the incident took place during the early minyan and not the larger minyan taking place only a few minutes later. We also saw a bullet hole in the front curtain and into the door of the Aron Kodesh (Ark where the Torah scrolls are located). Fortunately, the Ark’s doors are wood covered metal (the metal doors are like a fireproof safe to protect the Torah scrolls) and thus the bullet did not continue through. A horrific tragedy that will not be forgotten. But the gentlemen there all said that the calm of Shabbat helps.

Have a Shabbat Shalom. I look forward to, among many things, visiting the Hand to Hand School and having dinner with Charlie Schiffman before returning home.