Wednesday night, the Jewish Federation and our community welcomed Jeffrey Goldberg, the new Editor-in-Chief of The Atlantic, to our annual Gala event. This year's Gala, chaired by Sharon Stern, and her children Anna and Eric Kodesch and Jonathan Singer (who was masterful in leading a dialogue with Mr. Goldberg), was an enormous success with 400 people in attendance. 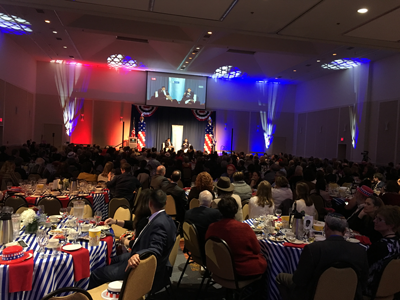 Jeffrey Goldberg was a wonderful speaker. He provided his insights on the upcoming election, which he called a “hinge moment” in American history. Not only is our country focused on the election, but countries around the world are fixated on our process. Mr. Goldberg explained that our allies and smaller countries (who may complain about our behavior but willingly ask for help) have always seen America as the “global guarantor of stability” and are questioning what will be following the election.

Mr. Goldberg talked about internal strife in America and how we no longer agree on a common “American story.” We have many challenges as a country: “Is America about the localists or the globalists?”…Do we continue to stand with free countries around the world and fight fascism and terrorism?... How do we adapt to changing industries where it is less about “upper body strength” and more about intellectual capabilities? The leading candidates have to answer these questions and many more following the election.

Mr. Goldberg’s expertise is in foreign affairs. He shared his thoughts about Israel and the growing disconnect between American Jews and Israel. Mr. Goldberg discussed how Israel has “forgotten how to tell its story, especially in a way American Jews want to hear that story.” He feels we understand each other less and less. American Jews need to better understand the actual reality of life in Israel -- while Israelis needs to better understand what we mean by Jewish values. The older generation intuitively understood the need and role of the State of Israel, but many have done a poor job of articulating that to their children and grandchildren.

On a side note, I had the opportunity to chat with Mr. Goldberg before his talk. He shared how much he appreciates the efforts in smaller Jewish communities to strengthen Jewish life. We should be very proud of our community, and the participation on Wednesday night shows how vibrant Jewish Portland is.

Now, 35 days into our 100 Days of Impact, I am pleased to announce that our campaign currently stands at $2.1 million! This is the fastest pace in our history, but we still have a long ways to go to reach our $5 million goal. Please take the time to make your commitment to our community’s campaign and meet the needs of our children, seniors, and families – here in Greater Portland and around the world.