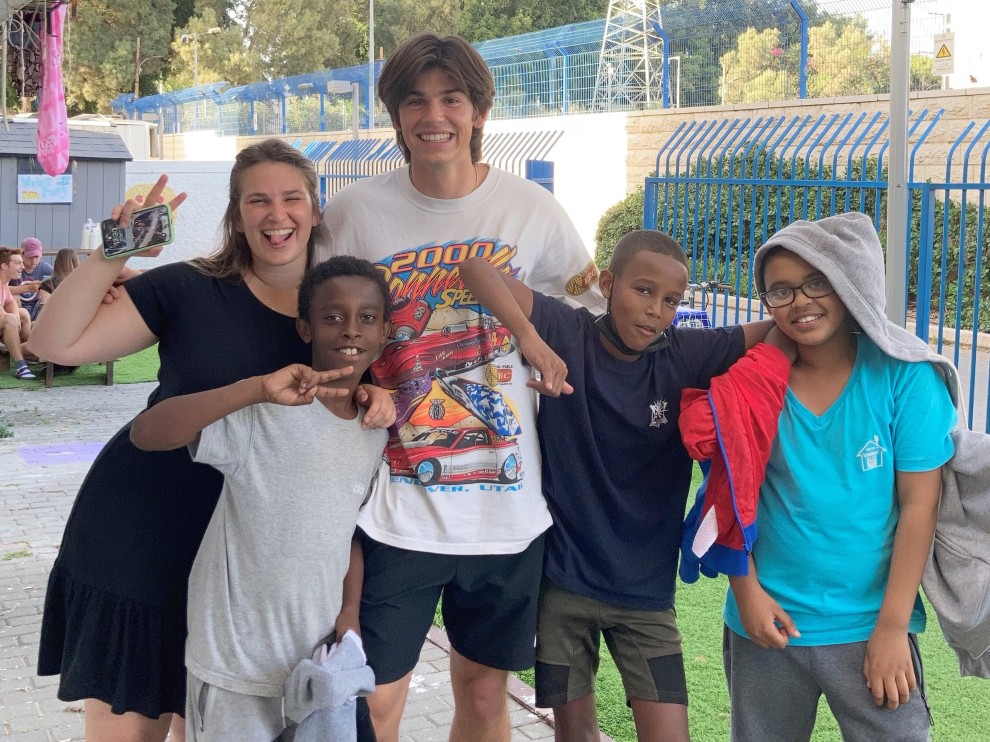 PHOTO: Oregonian Josh Foster spent five months volunteering at this day care center in Yafo, Israel, while on the Young Judaea Year Course. Here Josh and Israeli counselor Ophir are shown with three youth he worked closely with, Adisu, Adisu and Adam. “This day was really special, because we celebrated an America Day led by me and another girl on Year Course,” says Josh. “We played games like pin the tail on the donkey, cornhole and basketball, did face painting, and made peanut butter and jelly sandwiches.”

Catlin Gabel 2020 graduate Josh Foster didn’t plan to take a gap year before entering Occidental College. But when COVID kiboshed a normal college freshman year, he decided to spend the year in Israel on the Young Judaea Year Course.
“It’s been the best year of my life,” says Josh, who returned to Portland May 19.
He spent five months in Tel Aviv doing community service and four months near Jerusalem studying at Kiryat Moriah. He also had lots of time to experience Israel both on Year Course adventures and informally.
“One of the things that separates Year Course from other gap year programs in Israel is the
fact that we live with a group of Tzofim (Israeli Scouts) who are our age and are doing a year of service before serving in the IDF,” says Josh. “Having that connection with Israeli teens really helped me feel like an ‘insider’ in Israel. They are super friendly and very informative.”
Josh spent one Shabbat with a Scout and his family in Ra’anana. He also went on a camping trip near the Dead Sea one weekend with a couple of the Scouts and some friends.
“If you’re considering a gap year, want to try something different, make some lifelong connections, learn more about yourself and have an immeasurable amount of fun, Young Judaea Year Course is for you,” Josh says.
Josh wasn’t the only teenager who went in search of a gap year last spring. The pandemic that closed many college campuses drove many first-year students to defer their admission for a year. Twenty percent of Harvard first-year students opted to defer, more than double the usual rate; Penn State saw a 300% increase in freshman choosing to take a gap year. This year’s Young Judaea program was especially large, with 130 kids from the United States, England, Scotland and Holland who spent nine months in Israel.
Josh’s uncle, David Hershberg, told him about his experience on Year Course when he was 19 and suggested Josh check it out.
After a 14-day quarantine on arriving in Israel, Josh began volunteering at a day care center in Yafo, which has a huge Ethiopian and Arab presence. He made food for the kids, did art projects and helped them with math. But his favorite activity was teaching the kids English while they taught him Hebrew.
Josh was a member of Congregation Shaarie Torah in high school and served on the chapter and Regional Boards for Pinwheel USY from his freshman to junior year of high school. Being in a majority Jewish country after growing up in Portland felt “powerful,” yet he still felt at home.
“The amount of Jewish diversity in Israel (both cultural/ethnic and level of religiousness) was a difference that surprised and impressed me the most about Israel,” says Josh. “I am convinced that Israel’s diversity, a pillar of Israeli society, is one of the main reasons why the country, despite its size and age, has thrived and flourished.”
Josh hasn’t decided on a major when he starts college at Occidental this fall. But he says, “I love learning languages and am eager to continue educating myself and deepening my connection with the land of Israel and my Jewish identity.”
He has some advice for parents of high school graduates: “If you wish for your child to develop a deeper connection to both their Jewish identity and the land of Israel, as well as allow your child to experience the beautiful contrast that Israel has between modern, high-tech innovation and powerful religious energy/pivotal historic sites, I strongly recommend you send them on Young Judaea Year Course.”
The Jewish Federation of Greater Portland offers Chai Israel scholarships for high school, summer or gap year programs in Israel. Gap year scholarships are for high school graduates who have not yet started college. For details, contact Rachel Nelson at rachel@jewishportland.org or 503-892-7415 or visit jewishportland.org/travelisrael.