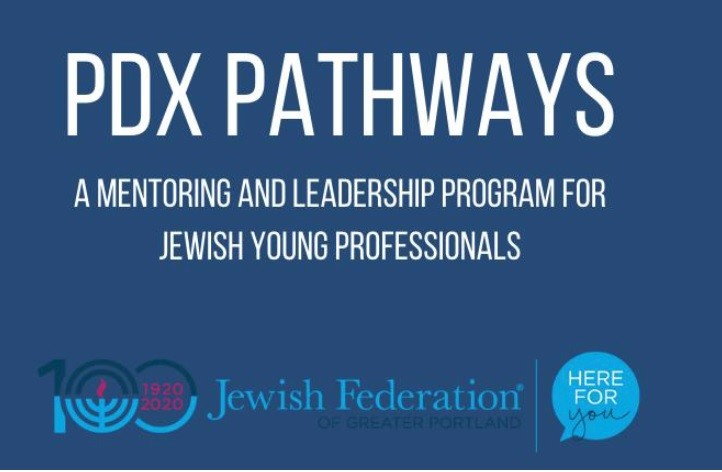 Nineteen young Jewish professionals have been selected for the fifth cohort of PDX Pathways, a mentoring and leadership program for Jewish young professionals ages 21 through 35ish.
This will be the first virtual cohort, and the first to offer four mentor groups: Jewish professionals, mid-level professionals, young professionals (two cohorts) or leadership development.
“This group of applicants is excited for a change to the everyday of pandemic life,” says Nadine Menashe, JFGP young leadership and communications manager. “Whether they graduated from college, moved from a different city or have had to alter their job duties during this past year, everyone has something that they need to improve their lives, and JFGP is honored to help provide that. My main goal this year is to really be able to impart meaningful knowledge and have the participants establish significant relationships during a program that is all virtual. I hope that participants will feel empowered to step into whatever role is calling their name, regardless of the circumstances the world has thrown at them.”
The program runs from January through May with a kickoff party on Zoom in December so participants and mentors can meet each other.
Following are the participants in each of the cohorts. 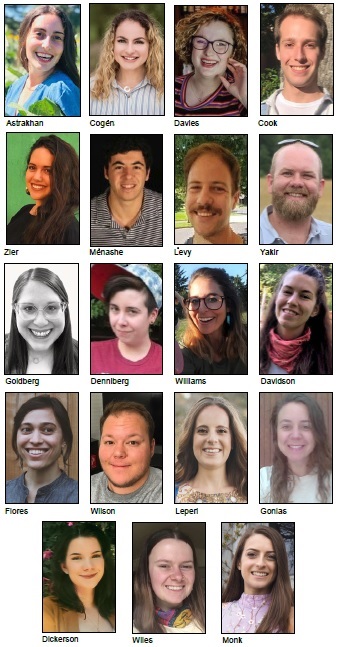 Natasha Astrakhan is a chiropractic assistant at Oregon Medical Centers. She grew up in Portland, studied in Ecuador for a semester during college and recently graduated from Linfield College with a bachelor’s degree in exercise science. She applied for this program to help guide her as she enters her professional life, network with others and make new friends.
Alana Cogen is a 22-year-old Portland native who graduated from Portland State University with a bachelor’s in communication studies. After high school, she worked in Jerusalem for two months teaching English to Jewish and Arab children at a summer camp.
Sararosa Davies is a Minnesota native and recent graduate of the University of Oregon’s School of Journalism and Communication. She has a genetic disorder that affects her connective tissue, which spurred her interest in the intersection of health, communications and culture. She is interning at Tight Lipped, a podcast on chronic pelvic pain.
Jacob Cook earned two Honor’s B.S. degrees in bioengineering and electrical & computer engineering from Oregon State University. He was active in Hillel. He says the PDX Pathways Program is an amazing way to stay connected and develop professionally.
Jess Zier grew up in South Africa. She lived in eight countries across five continents over the past five years while earning a degree from the Minerva Project. She is now exploring a career in EdTech as she focuses on eradicating digital inequity around the globe, while also writing her first book.
David Menashe graduated from the University of Oregon with a degree in media studies. He worked as a research assistant on two different research projects in the past two years. He enjoys photography to help him remember “those small moments.”

MID-LEVEL PROFESSIONALS
Justin Levy was born in Maryland. He worked in China and Washington, D.C., before moving to Portland in 2015. He is the upper elementary teacher at the Tucker Maxon School in Southeast Portland.
Tzvi Yakir was born in Steamboat Springs, Colo. He did not know he was Jewish until high school. In college, he attended Shabbat dinners and participated in the Jewish Fraternity SAM, Hillel and Chabad. After four visits to Israel, he moved there to serve in the Israel Defense Forces. He moved to Portland in 2018 and works in international travel sales.
Lauren Goldberg is a lifelong New Yorker who moved to Portland two years ago with her husband and pet rabbit. She is an alumna of Brooklyn Law School and is an attorney in both Oregon and New York.
Blair Denniberg describes herself as a proud Jewish lesbian who has lived in Portland seven years. After recently rediscovering her Jewish heritage, Blair is looking forward to PDX Pathways. She is the Executive Administrator to Leadership & Development for New Avenues for Youth.
Hannah Williams is a community engagement manager for the Oregon Department of Transportation. She relocated from San Diego to Portland for the quick access to nature and ability to use a bicycle for transportation.

LEADERSHIP DEVELOPMENT
Sarah Davidson grew up in Portland and returned home when the pandemic interrupted her year of teaching English in Israel. She works as a freelance graphic designer.
Lucy Flores is the Director of Innovation at FoodCorps. A Jewish-Filipina, she says she is “quick on my feet thanks to four years working in restaurant service and two years’ training in dramatic improv.”
Mat Wilson is a career readiness coach for the University of Oregon. From Forest Grove, he has competed in the Scottish Highland Games since his high school throwing coach introduced him to the competition.
Paulina Leperi was born in Russia and grew up in Cleveland, Ohio. She moved to Portland two years ago and works as a data analyst and software developer for an education agency. She grew up bilingual and has studied Spanish, Portuguese, German and French. She is now studying Hebrew, which she learned to read in middle school but never understood.
Stephanie Lee Gonias is a social worker who has provided direct service support to struggling and vulnerable individuals and families.  Raised on the East Coast, she considers Portland home. She recently spent four months backpacking in SE Asia by herself.

JEWISH PROFESSIONALS
Susannah Dickerson is a Portland native who grew up in a large family loving the Jewish community that was a pillar of support through the best and the worst. She is Oregon Hillel Director of Jewish Student Life at Oregon State University.
Zia Wiles is a 22-year-old educator and native Portlander who spent her elementary years in small town Oregon, where the anti-Semitism she experienced led her to get more involved in the Jewish community as an adult.
Sammy Monk is a New York native who feels at home in Oregon, particularly while hiking in the woods. She graduated from Syracuse University in 2017 with a B.S. in Advertising. Since moving to Portland last year, she has explored community-focused career options while doing freelance marketing.

The Jewish Federation of Greater Portland offers this exclusive opportunity to Jewish young professionals, ages 21-35 years old. Pathways is generously funded by the A. Victor & Betty Rosenfeld Leadership Development Endowment Fund of the Oregon Jewish Community Foundation.
The 67 alumni from previous cohorts have gone on to serve in lay and professional leadership roles at local Jewish agencies, synagogues and other organizations.
For more information on PDX Pathways and participants of cohort 5, visit jewishportland.org/pathways.